Richard Bachman published four novels prior to Thinner, published in 1986. They’d experienced moderate success as paperbacks, but it was Thinner that put Bachman on the best seller list. The book became a best seller because it was shortly after Thinner was released that a couple snoops revealed the Richard Bachman was in fact, Stephen King. 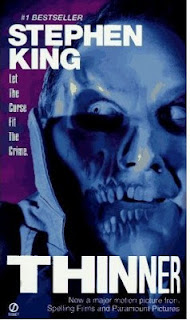 Like most of the Bachman books, Thinner is much more streamline than most Stephen King books. And like most Bachman books, it does not represent King's best work.

Billy Halleck needs to get thinner. He’s an overweight, middle-aged attorney who loves junk food too much. His wife and his doctor pester him to lose the weight. An angry gypsy provides the solution to Billy’s problem, but gives him a whole new set of problems.

Halleck is walking out of the court house one day, accompanied by his wife. He’s leaving, not as counsel, but as a defendant, having been charged with hitting and killing a gypsy woman. With transient gypsies occupying the lowest status in society and Halleck being a respected member of the legal community, the skids are greased to make sure that Halleck’s reputation is not hurt. As he walks out of court, an elderly gypsy man with a rotten nose walks up to Halleck and touches him gently on the cheek. He whispers the word, thinner.

Soon after the accident, Billy inexplicably begins to lose weight. At first he’s happy as the pounds fall off of his morbidly obese body. But his wife worries about the possible causes of spontaneous weight loss. The doctor assures him that he’s fine.

Billy gets to his ideal weight and continues to lose pounds and he begins to worry. He recalls the gypsy’s haunting word and touch. He starts to look into the gypsies and he is curious if anybody else involved in his case has been affected. He finds that the judge and the police chief have been afflicted with grotesque maladies. Billy is convinced that he is the victim of a gypsy curse.

He decides to find the nomadic tribe and confront the old man who cursed him. He leaves his family and pursues the gypsies. He later learns that his wife and doctor have signed an affidavit to have him involuntarily committed to a mental hospital.

Billy eventually finds the gypsies and stands before the Taduz Lemke, the gypsy chief who laughs at the “White Man from Town” when he asks for the curse to be lifted. They argue and the daughter of the woman Billy killed spits in his face before putting a hole through his hand with a ball bearing fired by a slingshot. Billy leaves the gypsy camp, promising to impose the curse of the White Man From Town if the old man doesn’t lift the curse.

Billy is now grotesquely thin, having lost 130 lbs and still losing two to three pounds per day. He tries to figure out what will be the curse of the White Man From Town, having uttered the threat. He decides to call an old friend who also happens to be a mob boss. The man travels from New York to Maine to meet Billy and promises Billy he will indeed curse the gypsies into submission.

Obeying Billy’s dictate that nobody be hurt or killed, Richie "The Hammer" Ginelli relentlessly attacks the gypsies’ camp, destroying cars and mobile homes. After Richie has destroyed most of the gypsies’ possessions, Lemke agrees to a meeting with Billy.

He and Billy meet on a park bench and Lemke agrees to remove the curse. He brings with him a cherry pie. He cuts open his thumb and squeezes a drop of blood into the crust. He tells Billy the weight loss will stop for a short time. He must find someone to eat the pie and take on the curse, or Billy will eventually shrivel away.

Billy leaves town after discovering the gypsies have killed Richie. He returns home and tells his wife he knows he’s been irrational, but he seems to have his weight problem licked. He secretly has a plan for his wife, Heidi, to eat the pie. Billy has come to blame her for the accident since she was giving him a spontaneous hand job that distracted him from his driving. He leaves the pie in the refrigerator and goes to bed early, hoping his wife will find it and eat it.

He awakens in the morning to find the pie out and two slices removed. His daughter has also taken a slice. Having now damned both his wife and daughter to suffer the curse of Thinner, he cuts his own slice so he can join them in a wasting death.

There are some things I like about this novel. It has a great plot. I liked the gypsy curse especially. As someone who has battled weight problems my entire life, I can appreciate the blessing turned curse.

Thinner stays true to the Bachman style of thin characters and rapidly paced, simple plots. Billy gets is developed enough in his backstory and personality the reader can understand his actions and motivations. He’s the only character that has any development. Those around Billy are not developed at all.

Taduz Lemke is a paper thin villain. This lack of development hurt the novel. Lemke was menacing enough when Billy engaged him in dialogue. But beyond that, he had no depth. There was nothing to make him particularly frightening.

Despite these shortcomings, it’s one of the better books to bear the Bachman nom de plume. The fact that it has a cogent plot makes it far superior to the dreadful The Regulators. While its characters lack the depth of those in Rage, the prose is far superior and the story works better.

In King’s published work, it ranks as an average novel. It was not dreadful, or even bad. But most King fans enjoy wonderfully developed characters, evil monsters and villains, and complex plots that characterize most King work. This book had thin characters, a lackluster villain, and a simple plot. John Saul made a career out of writing such stories and Thinner has just enough of everything to make it a serviceable, if not great, book.

Posted by Brian Schwartz at 3:54 PM