Write it When I'm Gone: Remarkable Off the Record Conversations with Gerald Ford by Thomas DeFrank 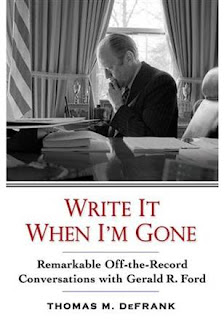 Write it When I'm Gone: Remarkable Off the Record Conversations with Gerald Ford
by Thomas DeFrank

This is a book for which I waited for many years. My fascination with Gerald Ford and his presidency is documented in my earlier review of his autobiography on this blog.

I am an unapologetic admirer of Gerald Ford. This man was thrust into the most difficult job in the world under the most trying of circumstances. Furthermore, it was not a job he sought, nor was elected. His courage, his patriotism, and sense of duty were all that Americans could and should expect in a president. Yet, when the time came for him to seek affirmation and elect him to a full term in his own right, we, as Americans, rejected him.

The conversations in this book took place over a thirty year period with journalist Thomas M. DeFrank. Ford made an uncharacteristically glib comment about the state of the Nixon presidency when he was vice president. Ford was able to talk DeFrank out of publishing the statement, thus earning Ford's unguarded trust for many years. Ford's condition was that his comments not be published until after his death.

No politician or president so carefully guarded his own opinions as Gerald Ford. Some regarded him as intellectually over matched by the presidency. Many believed that he and Richard Nixon had cut a deal for the pardon. His ambiguous relationship with former presidents Ronald Reagan and Jimmy Carter have been a mystery to historians. Now, we know the truth about all those things.

Ford was not a Reagan fan. He believed that it was Reagan who cost him the 1976 election. It was not just the primary election challenge. In his convention speech, Reagan played to his supporters and made little mention of Ford. On the campaign trail, Reagan was virtually absent in his support of Ford. While the dumping of Nelson Rockefeller and the addition of Bob Dole to the ticket helped with the Republican base, a strong show of support from Reagan would have solidified it.

Ford also felt that he should have been anointed the nominee to run against Carter in 1980. With Nixon politically destroyed, Ford was the party’s elder statesman and as such felt that the Republicans should have come to him first. Unlike Reagan, Ford was unwilling to divide the party and quietly withdrew his name from consideration before the public even knew he was contemplating a run.

Ford thought that Reagan was hopelessly naive and intellectually lazy. He thought his world view was dangerous. However, history would not bear out Ford's conception.

The two never did bury the hatchet as was reported in the media. Ford discusses in great detail the Reagan overture to Ford to join him on the 1980 Republican ticket. Ford was a pipe smoker. To broach the subject, Reagan showed up in the Ford suite at the convention with an expensive Dunhill pipe that Reagan called a "peace pipe". Ford, however, imposed conditions on his vice presidency that he knew would be poison pills for Reagan. He essentially proposed a co-presidency that would make Ford the leader of the country on certain issues. Reagan refused to accept. Ford claims that he made the offer knowing that Reagan would reject it.

The Nixon-Ford relationship has been dissected by historians since the days of Watergate. What Ford finally admits is that a large part of the impetus for the pardon was humanitarian. Ford was receiving reports from San Clemente that Nixon's despondency had put him in a suicidal state. Nixon's near-death crisis with phlebitis alarmed Ford. To spare Nixon's further humiliation and possibly his life, Ford pardoned him and wrecked his own career in the process.

Ford reflects on Nixon as a personally misunderstood man. He genuinely liked Nixon and thought he was warm and engaging. He recounts how he, Nixon, and Carter were on a flight to Israel for the funeral of Anwar Sadat. A flight attendant asked if she could have her picture taken with the three former presidents. He remarked that Nixon was eager to do it. It was Jimmy Carter who pitched a fuss before reluctantly posing.

Ford doesn't entirely spare Nixon. Some anger remains for Nixon's deception of him and the entire country about his culpability in Watergate. Ford staked a great deal of his credibility on Nixon's claims of innocence. Ford believed in him. When Nixon's duplicity was exposed, Ford was put in an awkward position of having to back away from earlier statements but having to continue to support Nixon right up to his resignation.

Ford's attitudes about Carter are remarkable. For many years, Ford was angry with Carter for statements that were made during the 1976 campaign. He also talked about how cold the man was in their meeting at the White House on inauguration day. However, the two talked a great deal near the end of Carter's presidency and afterward and Ford came to respect the man's intellect.

Ford is quite hard on his biological father, who his mother divorced when Gerald Ford was a young Leslie King, Jr. He had one meeting with the elder King when he was in college and came away from the encounter bitter. Some of this bitterness leaks into his otherwise vanilla memoirs. That genuine lack of respect and dislike is at the forefront of his recounting for DeFrank.

DeFrank recounts Ford's final days for us. He was wan at the Reagan funeral and made no public statements, indicating his mental faculties were slipping. While he never suffered from dementia, Ford's final days were full of lost memories and confusion.