Third from the Sun by Richard Matheson 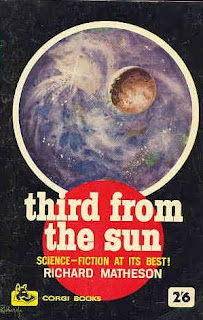 Third from the Sun
By Richard Matheson
Copyright 1954

This paperback collection of Matheson’s earliest work was published in 1954. It is a repackaging of an earlier collection of short stories entitled Born of Man and Woman.

Like Ray Bradbury and the other great writers of Golden Age Science Fiction, Matheson was a master of the short story and short novel. In Matheson’s early works, we can see that, even in his early twenties, he had mastered his craft. He was just a few years away from his groundbreaking work as a writer for the television series The Twilight Zone. Before that, he was working the same genre as the legendary Ray Bradbury, Robert Bloch, and Isaac Asimov. He would go on to literally invent the genre we know as post-apocalyptic fiction with his novella I Am Legend.


Born of Man and Woman
An eight year old child, deformed and inhuman, is locked in a cellar by “its” parents and left to suffer out of sight and mind. He observes the outside world and comes to resent the neglect and abuse heaped upon it by its parents. He soon becomes resentful and resolves the next beating will be his last. . .

Exceptionally well crafted narrative! Matheson tells his story with simple, primitive, gutteral prose. The creature in the basement is truly amoral and dangerous!

Note: This story is spoofed to a degree in The Simpsons in a Treehouse of Horror episode when Bart is locked in the attic and forced to eat fish heads.

Third from the Sun
A scientist, sure that the planet is doomed to atomic extinction, prepares his family and their best friends to leave in a spaceship he has designed and built at the military base where he works. They ponder the moral implications of fleeing the planet rather than helping to save it.

This is an average short story. However, Matheson retooled it when he went to work and made it into one of the most powerful Twilight Zone episodes ever. Instead of pondering the morality of their actions, the families instead deal with the tension of their plans being discovered and thwarted.

Lover When You’re Near Me
A warehouse manager is sent to manage a shipping facility on an alien planet. All of his workers are dull witted males. The only female of the race known to him is his maid and caretaker who calls herself, “Lover.” He finds his predecessor’s journal and reads a chronicle of a man driven to near insanity. Through Lover’s constant attention, he soon finds out what drove his predecessor to near madness.

What I appreciate about Matheson’s sci-fi – as opposed to the likes of Robert Heinlein, is his focus on character and emotion rather than technology. Like much of Matheson’s work, emotion is at the fore in this story and come to sympathize with the hero and his desire to be left alone.

SRL Ad
A college student answers and personal ad placed by a woman who claims to be from Venus. He becomes the subject of her ardor and, as is tradition, the wedding will be on her home planet.

Told through an exchange of letters, this is a deftly drafted piece of dark humor.

Mad House
A teacher becomes so bitter, angry, and depressed, that his rage is transferred from him to the inanimate objects within his home, making the most mundane and every day tasks untenable and maddening.

All I can say is sometimes, I can relate. . . What a wonderful story.

F---
A time traveler from 1954 to the future finds there is another “F-word” not spoken in polite company. It’s a word that you and I use every day for a substance that the fortunate of us encounter several times a day – sometimes more often than we should. This substance becomes an abomination because of an environmental cataclysm. The time traveler deals with his future shock and his cultural crime.

This story is best described as a farce. The title is designed to put our minds in a prurient place. But the source of the profanity is just a few inches north of the source of prurience. It’s a mildly entertaining tale, but a clever idea.

Dear Diary
Three diary entries by people of three different time periods. Each views his life as drab and uneventful.

Not really a story and there’s not much of a story here. Think sci-fi perspective piece.

To Fit the Crime
An arrogant, abrasive, overtly nasty poet lies on his death bed. As his final minutes tick away, he levels demeaning, hurtful, yet poetic insults at all who love him. For this, he finds the true nature of Hell when he passes to the next life.

Absolutely delightful! Matheson’s Hell is certainly how I would define Hell. . .

Dress of White Silk
A little girl lives with her grandma in the home where her mother died. When one of her friends comes to visit and pokes a little fun at her and her dead mom, our little heroine puts on a brutal fashion show for her tormentor.

Written in the patois of a six year old girl, Matheson tells a simple and inelegant tale of supernatural revenge with flair. Bravo! It was this story that, according to Ann Rice, inspired her to write horror.

Disappearing Act
A journal is found in a coffee house, three hours after its owner and writer left it there. It tells a story of a young man, in constant conflict with his wife about his inability to earn enough to support them. After a one night stand with a woman he meets in a bar, he chronicles the slow and random disappearance of all the people and places that make up his life.

This is the most straight forward horror in the book thus far. The tale is engaging and Matheson uses precious few words to tell a complex tale.

The Wedding
A young bridegroom, driven by superstition, takes great pains to make sure that nothing curses his upcoming nuptials to the love of his life. He forgets the most profound superstition about weddings – much to his chagrin.

Another straightforward horror story. This one not so compelling or interesting. Perhaps the weakest story in the book.

Shipshape Home
A woman is convinced that something just isn’t right with the apartment building she and her husband lives in. The rent is too low and the custodian is a strange looking fellow. When she investigates, she finds that there are rocket engines in the basement and a third eye in the back of the head of the custodian, she convinces her husband and her neighbors. But if you think their apartment building is an alien ship, you are wrong. . .

The twist, such as it is, is not well concealed. The story moves along nicely and its primary character is strong.

The Traveler
An atheist college professor volunteers for a time travel experiment. He is sent back to witness one of the most profound moments in Christianity and even though it doesn’t quite unfold as chronicled in the New Testament, he emerges a believer.

This is a strong story about Christianity and Christ’s final moments upon the Cross. Matheson shows he has the power to move his readers.
Posted by Brian Schwartz at 8:58 PM

Labels: Born of Man and Woman, Richard Matheson, Third from the Sun