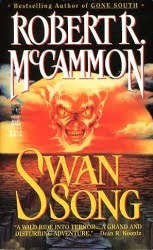 Occasionally, an author creates a world that the reader can inhabit in his mind long after he has finished the book. Stephen King did it in The Stand. Stephen R. Donaldson did it with his Chronicles of Thomas Covenant, and J.R.R. Tolkien did it better than anyone in his Lord of the Rings trilogy. Robert McCammon rises to that level in his magnum opus, Swan Song.

Swan and her de facto guardian, a freakishly large pro-wrestler, survive the nuclear war while hiding out in the cellar of a remote Nebraska gas station. Swan’s mother and the station owner succumb to radiation poisoning soon after the apocalypse. Swan and Joshua escape after approximately a month in the cellar and travel what’s left of America in search of food, water, and gasoline, along with the hundreds of other refugees that survive the ordeal. They soon end up in a small Missouri village. There, Swan demonstrates her special talent that will serve as the hope of mankind.

Sister (the only name she knows now) is a mentally ill, alcoholic, homeless person who survives by sleeping in a New York subway tunnel, emerges from her hideaway with her sanity nearly restored. She discovers in the wreckage a piece of melted glass in the shape of a donut. Within the glass are many precious gems and swirls of precious metals from a jewelry store across the street. The artifact gives her visions that lead her to that same Missouri settlement.

Colonel James Macklin had been reduced to serving as the chief draw of a commercial survivalist facility located in the Nevada desert. When the missiles hit, he survives the blast, but is trapped with debris pinning his hand. To amputate his hand and release him from his bondage, he finds an obliging 13 year old by named Roland Croninger who is a sadistic narcissist. Together, they form the Army of Excellence out of disaffected refugees. They storm across the countryside, raiding refugee settlements and killing those who oppose them. They want Swan and her talent to supply their army.

Eventually, they attack the Missouri settlement. They take Swan, Sister, and Joshua hostage and travel to a remote West Virginia ski resort where God is reputed to reside. The rest is the end of history. . .

It’s not hard to see the influence of Stephen King. There are too many parallels between The Stand and Swan Song. That does not diminish the power of this story, its characters, or the barren wasteland that is America after it is nuked. While the stories are similar, the characters are remarkably different. Besides, a tale can be retold in a number of ways and be enjoyable.

The character Sister is one of the finest and most complex I’ve ever encountered in horror literature. Her backstory is tragic and makes her an anti-hero who finds redemption in the post-nuclear world. McCammon teases us and keeps us engaged in her development by revealing details of that backstory sparingly.

Swan is not particularly remarkable as a hero. But McCammon uses her to impact the more complex characters around her to help them develop.

Roland Cronninger’s sadistic evil is developed nicely while not becoming a caricature – the chief fault of King’s Dark Man -- Randall Flagg. He clearly demonstrates the evil that video games do to our children as he sees himself as a hero in a video game as he carries out his evil deeds.

It's Cold War zeitgeist dates it just a little. But methinks that a lot of Cold War related literature is going to be getting a second look as the 1980s slowly becomes the decade about which our culture romanticizes.

I have read all of McCammon’s stuff. Swan Song is McCammon at his best and I rank it among the finest novels I’ve ever read by any author.
Posted by Brian Schwartz at 12:18 AM