The Girl with the Dragon Tattoo by Stieg Larsson 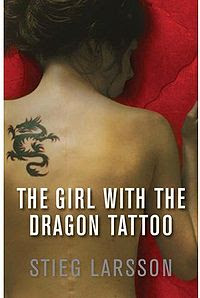 The Girl with the Dragon Tattoo
By Stieg Larsson

On my Facebook page, I exclaimed that I was reading a book currently on the New York Times bestseller list, and felt so. . . I left the phrase open because I wasn’t sure how I felt about it. It certainly wasn’t a feeling of snobbery. A guy who confines most of his reading to classic genre fiction can make few claims to intellectual snobbery. Reading a book that is currently the subject of discussion and movie making prospects is unfamiliar territory for me. I don’t know how to feel about it. I do know how I feel about the book and am happy for having read it.

The Girl with the Dragon Tattoo was the selection for September of my book/scotch/cigar club. Of the ten people who attended this month’s gathering, none disliked the book and most found it an exceptionally enjoyable reading. I was among them. Although this book’s genre (mystery) is outside my normal reading tastes and habits, and the fact that I had scant knowledge of the mystery genre, I found it to be a compelling page turner with strong red herrings, intriguing and realistic deductions by its hero, and well developed characters heavily engaged in various plots and subplots.

The device used to get the story moving was not original. A wealthy Swedish industrialist hires Mikael Blomkvist -- a seemingly washed up journalist, recently convicted of libel (a criminal offense in Sweden) -- to solve the 40 year old disappearance of the industrialist’s favorite niece who went missing from the island community where the Vanger family established its family compound.

In exchange for solving the mystery, Henrick Vanger promises Blomqvist not only badly needed financial backing for his failing magazine, but the information necessary to do in Blomkvist’s arch enemy –Hans-Erik Wennerström -- the man who sued him for libel.

As he begins his forensic investigation of the case, Blomqvist encounters Lisbeth Salander – a diminutive and mentally reclusive but cunning private investigator and computer hacker. Together, they begin to dissect, then piece together the clues to the 40 year old mystery.

With witness accounts more than 40 years old and a thorough investigation conducted at the time of disappearance, it would seem to be an impossible task. Blomqvist sorts through what physical evidence remains – dozens of photographs taken on the island that day, whilst the residents worked ceaselessly to remove a tanker truck that had wrecked on the island’s only bridge. These pictures chronicled the location of each island resident and member of the Vanger family. Through these photographs, Blomqvist is able to ascertain Harriet Vanger’s whereabouts that day and how she met with her fate.

The story is fraught with subplots and industrial intrigue. Salander, fiercely independent even though she is legally a ward of the state because of diminished emotional capacity, operates with her own agenda. Back at Blomqvist’s magazine, the Vanger money is employed to keep the magazine operating while Wennerström’s forces labor to bring it down by pressuring advertisers to bring it down. The lusty Blomqvist moves from sexual partner to sexual partner through the story. Behind it all is Blomqvist’s need to get the goods on the corrupt Wennerström to restore his name and get revenge upon the man who had seemingly ruined him. Woven within all of this is a pattern of murder dating back nearly a century of women in the region, all with a similar means and motive.

The book climaxes its various subplots wonderfully. We learn Harriet’s ultimate fate. That alone might have been enough to end an average book. In a horrific climax to another subplot, the clues lead us to the identity of the serial killer who has preyed on young women in the region for decades. Finally, through chicanery, industrial espionage, and deft computer hacking, we see Wennerstrom get his just desserts. The last one hundred pages are a roller coaster of insightful and clever planning followed by well written action scenes that are emotionally satisfying.

Complex characters, intricately woven plots and subplots, intrigue and deception, are the recipe for good mystery writing. Larsson has excelled in all of these and produced a book that cost me hours of sleep as I was propelled toward each resolution.

The book had few drawbacks. Some in our group complained of Larsson’s tedious need to list items and record the minutiae of mundane tasks. Sometimes, mild A.D.D. has its advantages as my eyes glossed past such boring details. (Perhaps its this glossing over details that has kept me from enjoying mystery books for paying attention to small details is important in enjoying mysteries). However, it would seem that I missed nothing important as I understood each revelation as it unfolded and did not need to return to earlier text to find out what I’d missed.

For me, knowing virtually nothing of Swedish geography, climate, economy, or culture, parts of the book were mysteries. I had no idea where people were in relation to each other. It’s a small detail that I noticed because I read American history and American fiction writers who use my homeland for their settings.

The book is translated from its original Swedish text. Since English is the only language I speak, I rely heavily on good translation for enjoying books written by foreign authors. French author Guy de Maupassant is always well translated. But I once read a Japanese novel that was a retelling of H.P. Lovecraft’s The Mound where the translation made what was supposed to be horrific into something comical. I encountered none of these problems with the translation of Larsson’s work. Other than occasional stilted dialogue, one might have believed this book was written in English.

The book has two sequels: The Girl Who Played with Fire and The Girl Who Kicked the Hornet’s Nest. Most of my book club plans to complete the trilogy. Alas for me, other reading priorities make this unlikely for me. All are on the New York Times bestseller list now.


The book’s Swedish title is Men Who Hate Women and the book’s underlying theme is misogyny. Salander encounters it through her legal guardians. The Vanger women encounter it through their industrial baron fathers, husbands, and sisters. Blomqvist’s lust drives him to dish it out a bit himself. Certainly, the women who died at the hands of the region’s serial killer encountered it in its vilest forms.

I thoroughly enjoyed this book. In all honesty, I did not want to like it. I’m often at odds with my book club because our tastes in literature vary greatly. The greatest value of belonging to a book club such as mine – besides the fellowship, the good scotch and great cigars – is seizing the opportunity to read books outside your normal sphere of interest and discovering new things. I can’t say was my favorite of my book club selections, but I can say that I have never been more pleasantly surprised by any book I’ve read through the two years I’ve been a member. The Girl with the Dragon Tattoo ranks high on my list of enjoyable books.
Posted by Brian Schwartz at 4:11 PM