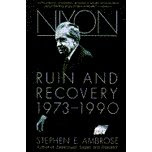 In this third, and final volume of Ambrose's stellar biography of Richard Nixon, Ambrose recounts Nixon's destruction in Watergate and the abortion that was the second Nixon Administration, Nixon's horrible depression and near death in the immediate aftermath of Watergate, and then Nixon's relentless pursuit and ultimate attainment of redemption and elder statesman status.

The book opens with the start of the second Nixon Administration. Instead of basking in his resounding mandate, Nixon was nearly as brutal to his allies as he was to his enemies. He and Bob Haldeman demanded and received resignations from all White House staff. Nixon's 1972 landslide had short coat tails and the Congress remained in the firm grip of hostile Democrats.

Also troubling Nixon was the pesky Watergate problem. By early 1973, it was certainly a topic of discussion in the halls of Congress and a congressional investigation was inevitable. The deeds that would seal Nixon's fate had already been committed. He saw cover-up as his only means of defense.

Ambrose does a wonderful job of describing and analyzing Watergate as it unfolded. Entire books have been written on this two year period, so Ambrose is forced to abridge the story to a large degree. But all of the essential elements are there to educate those who are not learned in Watergate lore.

Ambrose paints a masterful picture of Nixon's anguish as his enemies zeroed in on him and longtime friends and aides were indicted and imprisoned. Ambrose discusses, with some detail, Nixon's drinking habits during this time through named sources. This was always a matter of great speculation at the time and rumors of Nixon over-indulging were all over Washington in 1974. Ambrose reveals that Nixon was drinking more than usual then, but was by no means a drunk.

Spiro Agnew's troubles are described briefly and Ambrose dismisses him from his narrative just as Nixon dismissed him from his thoughts. The search for a replacement as vice-president is well documented. Nixon really wanted John Connally of Texas, but was cautioned by Republicans to appoint a Republican whose name would not cause controversy. He settled on Gerald Ford, the House Minority Leader. Although he was a veteran of many partisan battles, he was liked and respected on both sides of the aisle.

The narrative of Nixon's final days in office evokes an emotional response in the reader. Those who feel for Nixon today (and there are many) will sympathize for this man, so emotionally broken but determined to find some shred of dignity as he walked down the carpet to Marine 1.

These final days serve as a springboard for further analysis of Nixon's family relationship both publicly and privately. Privately, Pat Nixon was a wreck. Watergate nearly broke her. But she persevered and held the family together as Nixon pondered his final fate. His daughters believed in him always and urged him to stay on and fight. Behind the scenes, the Nixon's were a close American family struggling with horrible crisis like any other American family.

Publicly, Nixon was insensitive and cold as always. Moments after informing his family of his intention to resign, Nixon ordered the White House photographer in to record the moment for history. His family was privately devastated and about to be publicly humiliated -- and Nixon wanted the moment captured on film for posterity.

Ambrose also provides strong analysis of Nixon's farewell to the cabinet. I always found the speech to be one of Nixon's most powerful. He always spoke well off the cuff, and this speech was a definite ad lib. He invoked his mother and called her a saint. This was no exaggeration since many of Hannah Nixon's contemporaries used the word to describe her. I think he also left with a warning to future presidents when he imparted the lesson he had learned from his own conduct. He cautioned others not to hate your enemies, because your hatred will lead to your own destruction.

Ambrose didn't see it that way. He saw the speech as rambling and is highly critical of Nixon for not mentioning Pat. The public Nixon was as distant as ever from his family.

Ambrose captures the tension of the nation during that constitutional crisis quite well. He also captures the aftermath and Nixon's feeling of being besieged as lawsuits and the possibility of standing trial loomed before him. The man was despondent -- some thought potentially suicidal. There was a great deal of traffic between the White House and San Clemente in the days following resignation and Gerald Ford was alarmed at the reports he was getting -- about Nixon's health and Nixon's defiance. Nixon wanted to manipulate the custody of his documents via Al Haig, who had served as Nixon's chief of staff after Haldeman's departure and served Ford as an adviser on transition.

Ambrose is highly complimentary of Haig, and I don't agree with his assessment. Haig served Haig's agenda first and foremost. His conduct both before Watergate with the Moorer-Radford affair where the Joint Chiefs were discovered to be spying on the White House via pilfered burn-bag documents, and during Watergate when he often put his own well being before the president's. Bob Woodward also thought highly of Haig and made a noble hero in his book The Final Days . History and his future conduct in the Reagan administration have revealed him to be very much a villain.

Nixon's second tour through "The Wilderness" started with a blood clot in his leg that nearly killed him. In the final months of his administration, he took a tour of the Middle East and did quite a bit of walking while afflicted with phlebitis. Not seeing to the clot nearly killed him as he entered the hospital, seemingly having lost the will to live.

However, the Nixon instinct that motivated him to keep fighting kicked in and Nixon eventually recovered. He then was offered a full and unconditional pardon for all crimes committed in Watergate by President Ford. Nixon struggled because accepting the pardon would relieve him of the prospect of facing trial, but would require him to admit guilt. As badly as he wanted his day in court and ultimate vindication, he wisely accepted the pardon and then retreated to write his memoirs.

Nixon was out of the public eye for all of 1976. His name was not mentioned at the 1976 Republican Convention, nor was he invited. He began researching and writing his memoirs, having received a large advance from Simon and Schuster that allowed him to pay his legal fees. A young Diane Sawyer would be one of his assistants in this task.

The Bicentennial year also brought Nixon a major family crisis. Pat suffered a stroke while preparing breakfast. This was shortly after Woodward and Carl Bernstein published The Final Days and Nixon's daughters blamed the reading of that book for Pat's stroke. She would go on to recover, but would forever be afflicted with left-side weakness.

Nineteen seventy-seven saw Nixon emerge briefly for a series of interviews with David Frost that provided the nation with its first view of this formerly broken but resilient man as he recounted the bitterest moments in his life for public viewing. The interviews were his first effort toward rehabilitation.

Ambrose documents, with some degree of admiration Nixon's methodical, final comeback to respectability. His status with world leaders was on par with the sitting presidents that followed him. He was a prolific public speaker who never charged honorarium. He frequently appeared on Sunday morning news shows to provide commentary. He also privately communed with future presidents -- including Jimmy Carter and Bill Clinton -- who sought his advice on foreign policy. Foremost, he was an author who provided a succinct and introspective (if self-serving) recounting of his entire life in his autobiography RN: The Memoirs of Richard Nixon. His slow emergence onto the world stage culminated in 1989 when he opened his presidential library and all of the living presidents were on-hand to see Nixon's legacy put on public display.

As he grew older and began to enjoy private life, Nixon found the time to find joy in playing with his grandchildren. Having missed much of his daughters' childhood, he delighted in playing with them at his Saddle River, NJ home. After all those years, he'd finally learned to relax.

By 1990, Nixon's public standing had improved dramatically. Ambrose described how a trip to Capitol Hill to meet with Senate Majority Leader Bob Dole turned into a long autograph session as young staffers came to see this man who had shaped geopolitics like no one before him. The public bought his books while critics panned them. Historians and academics continued to hold him in low esteem, but to average Americans, who are much less dogmatic and much more forgiving, Nixon was rehabilitated.

Ambrose sums up his own feelings about Nixon at the end of the book. He, like most liberals of that time, was tremendously angry about Gerald Ford's pardon of Nixon. But time tempered his view and he now sees that pardon as a positive move. Watergate needed to end.

He also summed up his views of Nixon's legacy. His final conclusion was that the nation lost something valuable when it lost Nixon. Nixon's intellect and political acumen could have made him one of the great presidents, but his demons would doom him to ignominy.

Just a couple years after Ambrose published this volume, Pat Nixon died of a stroke. For the first time, the nation got a glimpse of the private Nixon laid bare. As he approached the funeral, supported by Billy Graham, Nixon stopped and began weeping uncontrollably. He wept openly during the funeral while the nation looked on. Nixon, who deliberately concealed his relationship with his wife through his entire public career, was exposed as a man who loved his family and was loved in return.

His 1994 funeral would have exceeded all of his expectations just ten years prior. The statesmen of his generation and the next generation came together to honor him. In the audience were all of the former presidents, Spiro Agnew, George McGovern, and other senators of past and present. He was eulogized by Bob Dole who, in a touching speech that left him breaking down in tears, described chapters of Nixon's life with the phrase "How American!" The nation mourned him as an elder statesman and his former foes in the media talked about his accomplishments as well as his failures. His death and funeral brought his life full circle and his final crisis was met.
Posted by Brian Schwartz at 1:19 AM