Book to Movie: The Martian Chronicles (1980) 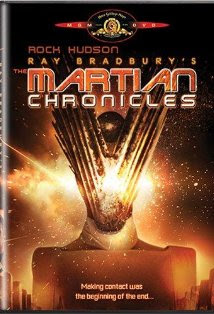 In 1979, The Martian Chronicles was made into a three part miniseries. Legendary screenwriter and novelist Richard Matheson was brought in to adapt the Ray Bradbury stories to television and weave them into a continuous story.

The book is a series of vignettes about the rise and fall of man’s civilization on Mars. Matheson strived for greater continuity by taking Captain Wilder of the successful fourth expedition and promote him to Colonel and have him serve as the head of the manned mission to Mars. Wilder is played aptly by Rock Hudson.

The story aired in three installments. The first installment was called “Expedition.” The first mission meets with doom at the hands of Ylla’s husband, just as it does in the book. The second mission – the one where the astronauts find themselves in a Martian asylum for claiming they were from outer space – is not in Matheson’s script.

The second mission on television is the legendary Mars is Heaven. Unfortunately, it lost something being brought to the screen. What is so prevalent in the radio adaptations is the exuberance with which each member of the crew meets their dead relatives. There is immediate acceptance of what the astronauts are seeing as reality. They never question what it is. That excitement is missing on television. What we see is the captain falling into a sedate home life before he puzzles everything out with his older brother who tells him he’s right before he kills him.

It’s the third expedition that is the most powerful on screen. To weave the stories together, Matheson constructs interludes that show some of the internal politics and personal lives of the characters involved with the missions. Major Spender, who goes on to nearly wreck the third expedition is denied a seat on the first and second expeditions. He starts to express reservations about the morality of exploring Mars and submits that expeditions will inevitably lead to colonization which will ultimately lead to a cultural clash with the indigenous population.

Here, Matheson has improved upon Bradbury’s work to make the tale of the third expedition work on the screen. We already know Spender’s mindset going into the mission. It manifests itself quickly once the expedition, led by Colonel Wilder himself reaches Mars. The rest of the story unfolds just as it did in the book.

Great casting also help make for a climactic ending for the first installment. Rock Hudson turns in a strong performance as the low key but effective leader. Spender is played by character actor Bernie Casey. The quarky Sam Parkhill is played by Darren McGavin. McGavin is best known in the mainstream as the father in A Christmas Story. Fans of fantasy and science fiction know him best as the fearless reporter Kolchak: The Night Stalker.

Of the three episodes, the first had the strongest feel of being just a series of vignettes rather than a woven tale. The interludes written in were much like the brief interludes Bradbury wrote. They lent nothing to the story except to transition it and reconcile it with the next chapter.

The second installment opens with the story, The Martian, which actually appears much later in the book. It opens with the father seeing his dead son standing in the rain and inviting him in where he and his wife accept this entity for the son they lost. In the television story, the son was one of the astronauts killed by Spender during the third expedition.

The scene breaks to Father Peregrine (Fritz Weaver) and Father Stone (Roddy McDowell) entering the desert to search for the blue orbs that are rumored to inhabit the nearby canyon. This story plays out just as it did in the book with Weaver and McDowell both performing strongly.

We then go back to the Lustig (LaFarge in the book) family that’s taking their fateful journey into town. There, the scene where the Martian is recognized by the townspeople as the person they most want to see, is perhaps a bit overproduced with the rapid flashing transformation of the Martian from one person to the next before being sapped of energy and collapsing into a heap.

The second installment finds Sam Parkhill, a survivor from the fourth expedition, who has constructed the first diner on Mars. This scene plays out just as it did in the book as well. McGavin is comical in the rhinestone cowboy getup and the wig of long hair. The scene of the sand ship chase across the sea of sand was well made by 1979 standards.

The show closes as Parkhill and his wife watch the Earth erupt in flames and his wife predicting “an off season,” at their diner.

The second installment worked better as a continuous story than the first. Colonel Wilder interacts with all of the participants. It’s he who figures out the Martian is moving about their town. It is he who goes into the desert to look for the missing priests. It is he who ventures out into the frontier to tell Parkhill and his wife that war is coming to Earth and they have been summoned home.

This is a striking difference between the book and Matheson’s interpretation. In the book, it was out of fear for loved ones that people fled Mars, headed to Earth. I questioned this reasoning in my review. Perhaps Matheson surmised the same thing when, in his interpretation, the people of Mars were summoned home by the government.

Installment three opens with the sad tale of Benjamin Driscoll (Walter Gripp in the book) and Genevieve Seltzer who find each other by chance on an otherwise uninhabited Mars. There is a striking distance between Bradbury’s characters and Matheson’s characters. In the book, Seltzer is a woman with an unattractive figure, doughy face, poor manners and questionable hygiene. In the movie, she is played by the shapely Bernadette Peters. As played by Peters, Genevieve is a woman of exceptional vanity and vapidity. She sees Wilder as nothing more than a tool or handyman. Finding her an unwilling mate and totally disgusted by her, he flees in his gyrocopter for solitude. This was to serve as a comical interlude, but the comedy was flat.

Meanwhile, Dr. Peter Hathaway, another survivor of the third expedition, and his wife and daughter have been living on the Martian frontier. He does his research while his family tends to his needs. Colonel Wilder and Father Stone return from Earth and find him. Wilder realizes that while his old subordinate has aged in the seven years since they parted, his wife and child have not.

The ending of this segment was much different than the book and Matheson’s twist I thought worked masterfully on television. It was the saccharine sweet performance of the late Nyree Dawn Porter that made it creepy.

Finally, Wilder has decided that, to prevent the mistakes of the past from being repeated, he and his family must become Martians. The family takes the “camping trip” just as they did in the book and that is how the mini-series ends.

According to IMDB, Bradbury found the movie incredibly boring. If sci-fi fans were looking for shoot-em-up action, they weren’t going to find it here. The television miniseries was nearly as cerebral as the book, with Matheson occasionally explaining things readers were able to figure out on their own.

The sets were top notch and it’s easy to see that the producers were willing to invest in sets, props, and special effects. The Martian cities resemble the imagery constructed by H.P Lovecraft in tales such as Call of Cthulu and many of his Dunsanian works with its off kilter geography of triangles and spheres rather than right angles. The models and other props used in the special effects were among the best of their day.

The Martian Chronicles stands at the pantheon of science fiction literature. As a television mini-series, its merely above average. Bradbury’s writing is nearly pure emotion. He’s not an action oriented writer. His work needs to be retooled when brought to the screen to keep the audience engaged. Richard Matheson deserves a great deal of credit for making this cerebral series of vignettes work on television.
Posted by Brian Schwartz at 8:03 PM