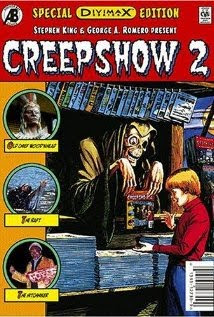 Five years after the decent success of the campy movie Creepshow which was written by Stephen King and directed by George Romero, a second trilogy of campy tales was released. Unlike the first movie, this movie contained an adaptation of a King short story, The Raft, from Skeleton Crew. The movie was panned by critics and tepidly received by horror fans. It lacked the camp, kitsch, and horror of its predecessor.

The first installment is called Old Chief Woodenhead and is set on a depressed Indian reservation. A white couple (played by George Kennedy and Dorothy Lamour) operate a general store on the reservation which has hit hard times. Martha Spruce, angry that they are not making any money and that her husband, Ray, is being taken advantage of, wants to pack it in and retire.

That evening, Ray goes outside to put some new paint on his cigar store Indian, to whom he talks lovingly. The chief of the reservation visits and offers thousands of dollars worth of family heirlooms, donated by the people of the tribe, as collateral against all that they have borrowed from them. Ray and Martha, kind hearted people they are, don’t want the collateral, but the chief insists, saying it would turn his people from borrowers to beggars and dishonor them. They accept the jewelry.

As they prepare to close the store, the chief’s evil nephew (played eerily by Holt McCallany) shows up with a couple buddies to rob the place to finance a trip to Hollywood where he is certain his good looks will make him an instant star. In the course of harassing the couple, they accidentally shoot Martha, then off Ray who comes after them.

The thugs each go home to pack for their trip to Hollywood. While at home, each is pursued and eventually killed by the cigar store Indian, who for decades had been so lovingly cared for by the old man. Justice is served.

That morning, the chief returns to the store to find the couple dead and a bloody knife in the hands of the wooden Indian.

Like all Creepshow fare, the story has a comic book simplicity about it which is entertaining. But a couple things stand out in this segment. First, McCallany’s look in the segment is absolutely creepy. He looks like an American Indian, but not the nice kind of popular culture, but the blood thirsty savage used in anti-Indian propaganda. There’s no makeup or special effect that accomplishes this and outside this role, McCallany is an acceptable looking individual. Give McCallany credit for making himself look creepy.

Second is the excellent special effects and makeup done to bring to life the wooden Indian. Today’s computer generated effects would have made this look stupid. The role is played by an actor made up to appear wooden, even as he moves. This would have been easy to do badly on the cheap. Instead, the makeup people did it right.

The second segment is Stephen King’s The Raft. The screenplay was written by George Romero and does not deviate far from King’s story, Romero adds elements, such as a duck getting caught in the slick just as the kids arrive at the beach to show the audience some malevolence that the reader will get through the prose.

Just as in the movie, the kids arrive at the lake stoned and swim out across the lake in the cold, October water to the raft. Deke immediately notices that the oil slick is moving toward them, seemingly under his own power. Randy, his jock buddy, makes fun of him for being paranoid.

However, the fun dies quickly when the girl is snatched off the raft when a tendril of the slick reaches up out of the water and grabs her by the ankle. Her death is the best cinematography in the whole movie when she is pushed up out of the water to waste level, covered in the slime, screaming, “Help! It hurts!”

Just as in the story, Randy the jock gets it next when he is grabbed from between the slats on the raft and pulled down in between. Another great piece of cinematography is when the last thing to disappear between the slats is his hand and the boards pull off his class ring to leave it lying there on the forsaken float.

As in the book, the remaining two wait in the cold night with no plan of escape. The girl finally resolves that she must lie down and rest. She falls asleep. Deke keeps watch on the slick, but soon his hormones take over and he decides to kneel down and cop a feel. Just as he’s starting to really grope the sleeping girl’s breasts, she wakes up with the oil slick covering the side of her face.

Randy’s had enough and jumps in to try to make it to shore. He swims with everything he has while the noticeably larger slick gains on him. He makes it to shore, stands up and starts to utter his sentence of triumph when the slick rises up out of the water and takes him.

The third segment, The Hitchhiker, is the worst of the three. A wealthy woman oversleeps at her gigolo’s house and must hurry home to beat her husband, lest he have to explain her absence. On the way, as she’s flying down the freeway, she drops a cigarette on the seat of her expensive Mercedes and takes her eyes off the road just in time to mow down a hitchhiker dressed in a yellow raincoat.

She leaves the scene, sure the man is dead, and resolved that her staying won’t change that. However, the hitchhiker, who others (including a truck driving Stephen King who say’s “He’s black, ain’t he?”) observe in the road, is on top of her car. He keeps trying to get at her inside the car, saying over and over again, “Thanks for the ride!” She shakes him off repeatedly, runs over him again, and rams him into a tree. (That Mercedes sedan does quite well off road).

Finally, she arrives at home, her Mercedes battered and beaten, but still running. She pulls into the garage just in time for the hitchhiker to thank her one more time for the ride before killing her.

The in-between sequences are acted in the beginning and the end, and animated in between. In the first movie, the kid reading the comic book was a much more sympathetic character with a verbally abusive dad who berated him for reading such garbage as E.C. Comics. This kid is chased by bullies who are animated poorly and the sequences come off as quite silly and detract from an already incredibly average movie.

“Chief Woodenhead” is fun to watch because of Holt McCallany’s performance. George Kennedy certainly didn’t put this movie on his resume. “The Raft” was good as well because it was well written and had some great money shots that really lifted the story. However, “The Hitchhiker” and the transition scenes really hurt this movie.

Certainly Stephen King has involved himself in worse projects (Maximum Overdrive and Sleepwalkers come to mind), but this movie ranks as below average in his big screen efforts. It lacks the camp that made the first one amusing and it does not rise to true horror, making it an average film at best.
Posted by Brian Schwartz at 5:34 PM