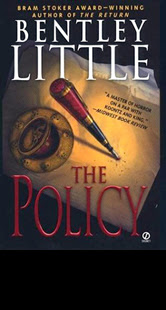 Bentley Little writes books as if he has axes to grind with the subject at hand. I’ve read a few of his books where he takes the absurdities of ordinary institutions and melds them into fantastical horror scenarios. In The Town, it was small town government. In The Association, it was homeowners associations. In The Policy, his beef is with insurance companies.

Hunt Jackson is an unemployed tech specialist, recently divorced, and living in Los Angeles. He decides to break with the grind of southern California and head back to his hometown of Tuscon, AZ.

He looks up some of his old buddies and finds that a friend from junior high school, Joel McCain. They hook up and renew their old friendship. It isn’t long before Joel and his wife find a girlfriend for Hunt. Hunt meets Beth and before long the two fall in love.

Hunt travels back to California to gather his furniture and belongings and transport them back to Tuscon. He stays the night in his old apartment and when he wakes up in the morning, he finds that the windshield of his car is cracked. So, he calls his insurance company.

He finds out that his insurance company has been acquired by another larger insurance company. When he talks to the adjustor on the phone, the adjustor says the time of the accident occurred, “Half past a monkey’s ass and a quarter past his balls.” Joel is taken aback and asks to speak to the adjustor’s supervisor. The line goes dead, so Hunt calls back and gets a courteous woman who is able to help him get his claim underway. She has no explanation for the prior adjustor’s behavior. Before hanging up, she suggests he look into renter’s insurance because you never know what can happen.

Hunt soon finds work with a tree trimming crew in Tuscon city government. One evening, while he is out, his apartment is broken into. His furniture and belongings are trashed. He calls his insurance company to file a claim and he is promised that his home will be repaired and his belongings replaced. He decides to spend the night with his girlfriend.

Meanwhile, Little injects a short chapter of a man who has an earthquake isolated under his home. While his home lies in shambles, no other home in the area is affected. The man laments not buying the earthquake insurance that his agent recommended, even though they don’t have earthquakes in Tuscon.

Joel returns to his apartment to find repairs have been made and possessions replaced. However, the work is not to his liking. The walls are painted black. His bed is replaced by a water bed shaped like a penis. His movies are replaced by pornography and his music collection is multiple CDs of Debbie Boone’s “You Light Up My Life.”

It’s not long before Hunt is approached by an insurance salesman offering him better renter’s insurance, but he decides to move in with Beth.

Other members of Hunt’s circle of friends and acquaintances are also hounded. Hunt’s supervisor turns down the homeowner’s insurance and the edition he is trying to build on his home is repeatedly knocked down by freakish accidents.

The insurance salesman continues to show up and force his way into their home. He offers Hunt a policy that will insure against arrest. Hunt laughs at the agent and throws him out. Just days later, he is arrested for molesting a child in the neighborhood. While in jail, the insurance man visits and offers him insurance against being convicted. Desperate to be out of jail and clear of the charges, Hunt jumps at the policy. The next day, the little girl who was his accuser is killed by a hit and run driver and all of the video tapes of her statement disappear.

Hunt’s friends have similarly bizarre occurrences. His friend, Jorge and his wife are expecting a baby. They have health insurance through his job, so they don’t purchase the insurance from this bizarre insurance agent or his company simply known as “The Insurance Group.” When the time comes for the baby to be delivered, the hospital will not admit his wife, saying that his insurance requires her to go to another hospital. She is taken to a hospital that is virtually empty of patients. She expects to deliver a boy. The child is delivered and whisked away. Moments later, the doctor returns and states “Here is your daughter!” The little boy’s penis has been cut off.

Soon, Hunt and his friends are intimidated into buying whatever bizarre insurance this agent offers. Hunt purchases the good neighbor rider on his homeowners insurance and when his next door neighbor starts to hassle him, the neighbor’s house is burned to the ground. When he purchases the employment insurance, the people in city government who are trying to outsource his job are caught in an embarrassing scandal and the supervisor dies in an accident.

Hunt and his friends decide to find out what’s behind this insurance company that wields such power and influence and acts with malice and immorality. Hunt’s search takes him to a partially collapsed building in a remote part of town where they encounter the insurance agent. Hunt has an inspired idea.

He wants to purchase the mother of all life insurance polices – the policy that guarantees immortality. The agent is thrilled! It will be expensive, the agent tells him, but well worth every penny. The agent has such a policy himself. Hunt signs his name to the policy.

But they find out that the Tuscon office is just a branch office. More research leads them to Mexico. Hunt, Joel, and Jorge, along with their spouses, travel to Mexico determined to find this agent’s life insurance policy and destroy it.

Through the help of some locals, they are able to locate the home office which is way out in the middle of nowhere. There, they find offices maintained by nameless, faceless beings who do not notice their presence. Eventually, they find the file room. It includes maps and documents that show that this insurance company helped topple Rome because it was behind on its payments. It had a hand in defeating Napoleon because he had not purchased insurance. They also find the agent’s policy, etched in runes they don’t understand. They destroy the stone tablets. But the agent lives.

Hunt figures out that for the policy to be null and void, all copies must be destroyed and the agent would certainly have a copy of his own. They find their agent’s office in the complex and find his policy. The agent shows up, but too late. Joel takes a match to the policy and the agent dies. They are free of the menace of the Insurance Group.

This book was exciting and intriguing for the first three quarters. Little builds the tension and suspense nicely with each twist to the insurance racket. But the ending was so woefully bad that I ended up not liking the book at all.

The trip to Mexico and the absurdity of these ancient beings working in an office in the desert stretched credibility too far. He should have written a better ending when Hunt found the Tuscon office.

There were also red herrings and other occurrences that were put forth several times, but then never explained. Hunt and Beth were certain that their spare bedroom was haunted. They saw reflections in the mirror. They heard noises like wood striking wood. This was left as a loose end. We never get to find out who or what was in the spare bedroom or why.

Also, the men who were responsible for enforcing the policies were described as men who wore trench coats and fedora hats. We never get a hint at who or what these men were or what their motivation was.

This is the fourth of Little’s books I’ve read. The first three were compelling, well plotted books from beginning to the end. This one just veers off into absurdity near the end and leaves too much unresolved. I would recommend Bentley Little to anyone who enjoys horror, but I would caution them against reading The Policy. The ending is just too poor, leaving the reader completely unsatisfied after being led through more than 300 pages of exciting and riveting horror.
Posted by Brian Schwartz at 5:13 PM