Book to Movie: The Dark Half 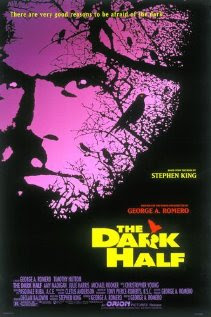 In 1993, like most King novels, The Dark Half got the screen treatment. The writer and director was the legendary George Romero. King and Romero had collaborated before on the 1982 sleeper hit, Creepshow with success. This collaboration was not nearly as successful – or good.

The opening scenes are of Thad Beaumont’s childhood when he experiences tremendous headaches and eventually has to have surgery to remove what the doctor believes is a brain tumor. The surgical scene when the doctor finds out the true cause of Thad’s malady is horrific and terrifies. From there, the movie goes downhill.

Romero rewrites the King story, keeping its essential elements and events in place. In opening of the book, Thad Beaumont’s outing as George Stark is in the past. The photo spread for People is in the past. Romero opens with it and it takes the movie forever to get going. Perhaps had I not read the book and knew about all that Romero was showing me in the first 25 minutes, it would have meant more. But I’d wager that most people who went to see that movie read the book and didn’t need it.

From there, the movie flows much as the book with the series of killings of all those associated with the People magazine article. But it flows too quickly. King takes several pages of text to describe the murders in excruciating detail. Romero breezes through them.

Another dramatic change is in the description of George Stark. King’s stark was a large, blonde, “high toned son of a bitch.” Romero’s Stark is a caricature of Elvis talking like Johnny Cash. It came off as a foolish attempt to make Stark look like a 1950s reject from Rebel Without a Cause.

Other events and characters are tinkered with to make them more exciting on film. Thad’s associate at the college, Rawley Delesseps, is converted from a man into the caricature of the bizarre woman who has encyclopedic knowledge of the occult. Thad’s escape from his protective detail is much more exciting (if not as creative) than that in the book.

The end of the movie is blocked differently, but essentially the same as the King book. The sparrows do their number on Stark and carry off his remains. Thad and Liz live happily ever after and presumably Thad never writes another Stark book. Sheriff Pangborn is left to deal with the events in Needful Things.

Timothy Hutton works as Thad Beaumont and Amy Madigan is cast well as Liz. From there, casting goes downhill. Michael Rooker is horribly miscast as Sheriff Pangborn. I like Rooker and thought his debut movie, Henry, was excellent. But he comes off as a southern sheriff in a Maine community.

Having Hutton play both Thad and Stark is foolish. I know the underlying premise of the movie and book was the connection between twins, but King never implied or inferred that Thad’s twin was an identical one. In fact, King tells us that Stark is purely a conjuration of his own imagination – physical description, biography, and death. They should have cast a large blonde actor for this part just as King had written him..

Romero has made some incredible, legendary movies and he’s made some of the worst garbage to ever see celluloid. The Dark Half doesn’t have any of those moments that make you groan with agony they are so bad. There is no stilted dialogue, no gratuitous violence, no tacked on sex scenes, or bad cinematography. It has none of the things that make a movie painful to watch.

But it lacks some of the essential elements that make a film interesting like well developed characters, a plot that moves, a climax that excites.

The Dark Half was not a bad movie, nor was it a good one. It was simply two hours of incredibly average characters in an incredibly average movie. My feelings would perhaps be more visceral had I actually paid to see the film. Had I, I would feel ripped off. Having watched it on DVD, I invested two hours in a boring film.
Posted by Brian Schwartz at 5:07 PM