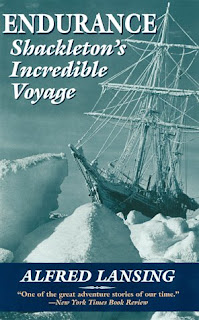 One of the great benefits of being a member of a book club is reading books you would otherwise never consider reading. I am not a fan of seafaring adventure. I’ve never read a book regarding seafaring other than books about the Titanic and the Edmund Fitzgerald and have no real interest in maritime subjects. I was not thrilled when this was the book of the month for our group, but decided to read it anyway since another member was willing to lend it to me and I didn’t have to shell out for it. I am truly grateful that it was lent to me because I thoroughly enjoyed this incredible tale of perseverance and survival.

Lansing tells the tale of the ill fated Imperial Trans Antarctic Expedition led by Ernest Shakleton. Shakleton, a man of large, but subdued ego, had been bested in the attempt to be the first to reach the South Pole. He decided he would place himself at the fore of great adventurers to be the first to traverse the continent on foot.

Shakleton selected his crew rather capriciously with some interviews lasting no longer than five minutes. Yet, when it was crunch time and each man had to reach down deep inside to survive and each man had to put aside his own discomfort, Shaklteton’s crew performed with stoicism unrivaled by any account I’ve ever encountered.

Shakleton and his crew set out for Antarctica in a wooden barquentine ship called Endurance. They sailed into the Weddell Sea, hoping to make landfall on the Antarctic continent and start their journey across. Before they could make landfall, the ship became hopelessly locked in an ice floe.

Lansing drew heavily on the journals kept by the crew of the Endurance, so one can believe that what is in Lansing’s book is the authentic feeling of those who survived rather than an author retelling a tale to make it more heroic. The Endurance was locked in this ice for ten months. During this ten months, the crew actually seemed to enjoy themselves. They had scant few books or other sources of entertainment to serve as a diversion. They had only their duties and time to kill, yet they looked upon it (at this point) as a positive experience.

The Endurance, however, could not endure the extremes of the Antarctic. For ten months, she drifted north with the pressure of the floe building on her hull. Finally, she began to groan and creek and was eventually crushed. The crew salvaged what they could from her including stoves, food, and three boats, and set up camp on the floe as their ship was reduced to kindling and eventually sank.

On this ice floe, the crew remained for a year. They survived on the scant rations they scavenged from the Endurance, seal meat, and penguins. When meat was scarce, they dined on their pack dogs. The floe took them slowly northward. All through this, Shakleton kept his crew functioning as a team.

Lansing does not portray each of these men as saints. Shakleton had some troublemakers among his crew. How he managed the troublemakers made the difference. Rather than shunning them or keeping them at a distance, Shakleton would embrace the most problematic of his crew. By keeping them close to him, he could keep them away from men of less resolve who would be distracted by their antics.

As they drifted north over the year, the floe upon which they camped got smaller and began to develop serious cracks. Eventually, Shakleton put his men into three small boats and set out for Elephant Island which was just a couple hundred miles away.

Keep in mind, this was before the time of GPS, radar, or any electronic guidance. They navigated by stars, moon, and sun. Elephant Island, despite its name, was not a large body, yet this crew braved frigid cold and harsh seas to get there. The navigation skills exhibited by his navigator, Frank Worsley astound the mind.

Their arrival on Elephant Island was the first time the crew had stood on terra firma in 500 days, but it was not a happy time for them. Their shelters, constructed of stones chinked with snow and topped with a lifeboat and tarp were cramped and inhospitable. The seal oil they burned for heat and cooking covered them in soot and they had not bathed or shaved for more than a year. Their small beach on Elephant Island afforded them little lee from the vicious blizzards that assailed them. Staying on Elephant Island, awaiting rescue, was not an option.

Finally, Shakleton resolves to cross 650 miles of open sea in a sixteen foot open boat to Georgia Island where there was a whaling colony. He selects his crew and sets off, promising his men he will return with rescue.

The final third of Lansing’s book is incredibly enthralling as he documents the discomforts and pains suffered by the crew sailing the Antarctic seas in an open boat and by those left behind on Elephant Island with nothing but time and penguins to kill.

Aboard the boat, men tried to sleep atop the bags of ballast stones in deerskin sleeping bags that were decomposing. As the bags rotted, the hair that lined them got into their mouths, their food, and their water. Provisioned for only four weeks, they could not afford to throw away any food or water, spoiled or not. They endured storms. They dared harsh winds to break away ice from their mast that would have capsized the boat had it been allowed to remain. Their navigator, Frank Worsley, seldom slept over that month as he made constant adjustments in their course to get them to Georgia Island.

Meanwhile, back at camp on Elephant Island, the men were miserable. The stove heated their makeshift cabin, but often filled it with smoke. Some men snored loudly, making it impossible for others to sleep. The floor often flooded. Food was meal after meal of penguin or seal. Entertainment was nil. A few men kept journals which served as the only diversion. One man suffered a heart attack and managed to survive. One man had all the toes on one foot amputated because of gangrene brought on by frostbite. As the months passed, each privately began to give up hope although none would give voice to the thought. They agreed to give Shakleton until the middle of August to rescue them.

Shakleton and his men make it to Georgia Island, but they’re on the wrong side. Their boat is destroyed and a mountain range and glaciers stand between his crew and the whaling camp. No man had ever traversed that obstacle, but Shakleton knew it was his only option. He and two other men set off, leaving the other two behind to await rescue. They scaled the mountain.

Three times they went up, only to be met with ridges and cliffs that could not be descended. Having endured so much over so much time, Shakleton would not be thwarted. Finally, in an act of desperation, he and his men careen down a glacier, sliding on their asses at high speed. A collision with a rock would have killed them. Just a small ridge of rock sticking up out of the ice would have literally ripped them a new one. Somehow, they made it to the bottom and found the camp.

Boats were dispatched to the other side of the island to pick up the two men left behind. They were allowed to shave, bathe, and acquire new clothing. But Shakleton wasted little time in going back after his men on Elephant Island. But his frustration was not yet ended.

Three times, Shakleton led voyages toward Elephant Island only to be stopped by weather or ice. On the island, one by one, the men lost hope and began living to die. Finally, on August 30, Shakelton made it. He evacuated his men back to Georgia Island. There, Lansing’s tale ends.

The book was exceptionally well received by my book club. There were a couple (one an English professor and poet) who found the writing dry, bereft of metaphor and simile in saying, “it was cold.” They compared it to journalistic writing. However, they agreed the tale was compelling enough to keep them engaged.

Indeed, this was a story that even the worst professional writer would have to work hard at telling badly.

After reading it, it is still hard for me to conceive that it was true. For me, with the ever short attention span and constant need for mental diversion, the time killing aspect was compelling. I simply can’t conceive of spending that much time without a book, without a movie, without something to occupy my thoughts.

Lansing is guilty of saying again and again, “it was cold.” Yet many in our group remarked that they felt cold while reading it, even though it was the August monthly selection. As a person who can bask in 90 plus degree weather and finds 40 degrees to be cold, the phrase, “it was cold,” repeated over and over again was almost entrancing. I was cold when I read this book.

I probably will not willingly revisit the maritime story willingly. As I stated, it’s not what I enjoy because I have little experience with it in real life. But this one time visit to the genre I liken to visiting an amusement park while on vacation. I had a splendid time while I was there, but probably won’t go back.
Posted by Brian Schwartz at 4:28 PM