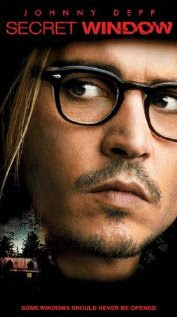 David Koepp used many of the elements and scenes from the Stephen King novella, Secret Window, Secret Garden, but completely changed the motivations of the characters to tell a different story.

Just as in the novella, successful author, Mort Rainey (Johnny Depp) is bedeviled by a man by the name of John Shooter (John Turturo). Like the story, Shooter accuses him of having stolen a story from him. He wants Rainey to admit to having stolen the story.

The Mort Rainey of the movie is essentially the character King created. He’s depressed about his divorce, experiencing writer’s block, and is prone to taking long naps. Instead of a cat, he owns a dog.

Events start playing out just as they did in King’s story. The Rainey house, currently inhabited by Mort’s ex-wife (Maria Bello) burns down and along with it Mort’s proof against the allegation of plagiarism. From there, the story deviates far from King’s.

In the story, Mort’s incident of plagiarism is revealed to him in his dream and we come to find that the guilt of that act of theft has led him to create John Shooter and take on his identity to kill his friends and burn his home. In the movie, he has a dialogue with himself, similar to the book. Instead of plagiarism, we come to find that it was his wife’s betrayal that has driven him mad.

As Mort falls deeper into anxiety over Shooter’s demands to produce the story, Amy becomes concerned about him. She decides to visit him at the cottage to try to help him through his problems.

Just as in the story, Mort has descended into madness and ceased to be Mort Rainey, taking on the personality of John Shooter. As in the story, when Amy arrives, she finds Mort dressed as Shooter and Mort tries to kill her.

When Mort has disabled Amy and has her where he wants her, her boyfriend shows up, having followed her. Mort decapitates him, then goes to finish off Amy.

The story ends with Mort going into town to purchase groceries. It is evident that the people in town despise him. That evening, the sheriff pays Mort a visit. In Mort’s home, he finds ears upon ears of corn cooking and Mort hard at work at his typewriter, eating corn while writing. He tells Mort that he knows that Mort has killed his wife and someday he will prove it. Meanwhile, he instructs Mort to stay away from town, that people don’t want him there anymore. The camera then focuses on a garden of corn stalks and fades.

Rather than fixating on the issue of plagiarism, which is probably of greater interest to readers than to movie viewers, Koepp chooses to veil his movie with bits from the story that Mort has stolen. In that story, the main character is betrayed by his cheating wife. He eventually kills her and buries her in a garden adjacent to her home. The character is convinced that if he plants a crop and eats it, eventually her death will become a mystery to even him.

Koepp tells a different story, but it works well as a movie. Being quite familiar with the book and thinking I knew what to anticipate, I was shocked and impressed with the conclusion which was not a twist to the movie audience, but was certainly a twist to those of us who read King’s original story.
Posted by Brian Schwartz at 1:33 PM