In 2009, director Jeff Beesley took Stephen King’s long short story, Dolan’s Cadillac, expanded it, and made it into a surprisingly solid movie. 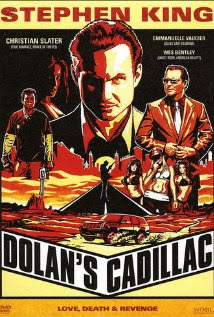 The King story is the second half of the movie. The first half is the set up that King glosses over to get us to the action. Robinson’s wife, Elizabeth, is out horseback riding in the desert when she stumbles onto our villain, Dolan, brokering a deal for Mexican women. She watches as Dolan (portrayed by Christian Slater), unhappy with the merchandise, kills the delivery men and some of the women. She starts dialing 911 when they notice her. They shoot and she flees, dropping her cell phone. Dolan’s people find the cell phone and take it with them as they tool back toward Las Vegas in Dolan’s armor plated Cadillac Escalade.

A few days later, Robinson and Elizabeth arrive at home to find a dead Mexican woman in their bed; her lips are sewn shut. Dolan has sent them a warning.

Undeterred, Elizabeth goes to the feds and reports what she saw. The FBI is thrilled to have someone that can testify against Dolan, against whom they’ve been trying for years to build a case. They put her in protective custody at a Las Vegas hotel and begin building their case.

Elizabeth and Robinson go stir crazy in their hotel, waiting for the feds to build their case. One night, Elizabeth decides to slip out. Robinson gives chase, knowing that slipping their protective detail will lead to a bad end. He arrives outside the hotel just in time to see Elizabeth blown up as she opens the door of their car.

With King’s backstory properly revealed on film, the King story starts. Robinson goes through the motions of living, but is empty without his wife. He begins following Dolan. He purchases a 44 magnum and prepares to assassinate Dolan as he leaves his Las Vegas suite. As he waits, another group with assassination as their goal shows up and Dolan watches as Dolan takes refuge in his armored Escalade while his men cut down the assailants with cold efficiency.

In King’s story, at one point, while following Dolan, Robinson ends up right on Dolan’s rear bumper at a detour – the detour that gives him the idea for his revenge. In the story, Dolan doesn’t notice him. In the movie, Robinson stops at a rest area for a bathroom break and Dolan and his men show up. The put a beat down on him and Dolan tells him he is too weak and pitiful to kill. He spits in Robinson’s face as he lies writhing on the bathroom floor. Before departing, Dolan delivers a cryptic lecture on the arc of descent, meant to be a warning to leave him alone.

Robinson returns to his life and his classroom as depressed as ever. He is pondering the arc of descent as he starts pushing a line of erasers from his desk into a trash can. We never see any physical signs of epiphany, but we know from reading the story that Robinson has formulated his plan.

Over Labor Day weekend, with the road crews on holiday, Dolan heads for the desert to set his trap. Dolan sets off for Los Angeles to take delivery of his latest cargo. His agent in L.A. contacts him en route and shows him the solution to increasing the profit margin. He explains that they can get a higher yield with more volume per cargo container. This load contains children to be brokered.

From there, events unfold just as they did in the story. Robinson joins the Nevada road crew and learns to operate the equipment. He digs his pit, removes the detour and waits for Dolan to arrive. Dolan’s driver dutifully drives right into the snare.

While staying true to the essence of the King story, burying Dolan in the movie is much more drawn out, with Robinson throwing shovels of dirt on the Caddy while dialoguing with Dolan, tormenting him; making him scream. At one point, Robinson turns off the cellular blocker he is using to talk to Dolan on a cell phone and allowing him to use his onboard computer to watch as he pours more dirt on Dolan’s tomb.

While Robinson goes about his business, he gets a call from the FBI agent working the case. They've raided Dolan's warehouse, arrested his people, and are executing an arrest warrant for Dolan.

With time running out, Dolan eventually gets busy with the back hoe and fills in the hole, leaving a little gap over the sunroof. He places the symmetrically cut pieces of asphalt back in place. Dolan watches with horror as Dolan slides the final piece over the sunroof.

This was one of the finer King adaptations I’ve ever seen and I’m surprised it didn’t receive more acclaim. It didn’t have any corny special effects, tacked on characters, or major rewrites that often ruin King’s stories on screen.

Adding the backstory as part of the plot was necessary to make a movie and it could have been done poorly with a series of flashbacks. To use flashback as a story telling device for this story would have been instinctive. Instead, screenwriter Jeff Beesley tells it in real time, making it much more enjoyable for an audience that had not read the story and King fans alike.

The deviations from the story such as Robinson’s encounter with Dolan in the rest stop added to the tension and were folded neatly into the story. Too often, when screenwriters pad a King short story, they tack on scenes. There was nothing tacked on in this story.

I pictured Dolan as I read the story as a character from The Sopranos – a large, middle aged man of Italian ancestry. Christian Slater was neat, prim, and attractive and played Dolan with a coldness that was striking. Seldom have I seen Slater pull off a roll so well.

In King’s story, Robinson had a cold detachment from his revenge. To him, it was a laborious task to be carried out at the behest of the ghost of his dead wife. He is methodical in carrying it out. King even opens with the Spanish proverb about revenge being best served cold. In the movie, Robinson delights in tormenting Dolan. This took a little away from the Robinson’s character who was supposed to be a mild mannered grade school teacher.

That is but a minor weakness in what was otherwise a superb adaptation of one of King’s finer short works.