A Canticle for Leibowitz by Walter M. Miller, Jr.

A Canticle for Leibowitz
By Walter M. Miller, Jr.
Copyright 1960

Walter M. Miller, Jr. a prolific pulp writer of the 1950s, combined three short stories he published in the Magazine of Fantasy and Science Fiction about an order of monks dedicated to a post apocalyptic hero into a short novel published in 1960. The results were the Hugo Award winner for the year 1960, A Canticle for Leibowitz. 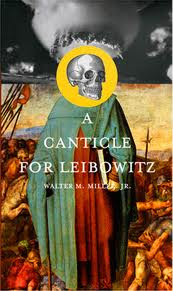 Part I: Fiat Homo (Let There be Man)
The setting is the American Southwest, 600 years after a twentieth century nuclear war, or the Flame Deluge as posterity calls it. The monks of this remote desert Catholic monastery are dedicated to preserving and studying the works of Isaac Leibowitz – an engineer who, in the times following the nuclear devastation, worked to preserve the technology and the culture of mankind for future generations. Leibowitz and his group worked against society that, after technology had destroyed their world, rebelled against scientists and intellectuals.

Brother Francis is a brother of St. Leibowitz sent into the desert to fast and reflect. As he is constructing a shelter, he is happened upon by a strange traveler who helps him select the final rock with which to construct his shelter. When Brother Francis moves the rock, he finds that it covers a hole in the ground that accesses an underground room.

In that room, Francis finds several desiccated corpses and machinery far beyond his level of comprehension. He finds electrical schematics and handwritten notes (including a grocery list) that Francis comes to suspect might have been written by Isaac Liebowitz himself.

The traveler continues on his way in the desert and Francis hastens back to the monastery with some of the documents to report his finding. His discovery and assertion that perhaps the materials he brought back contain the actual writings of Liebowitz starts a stir among the order. Some eagerly embrace the new material as the actual work of Isaac Liebowitz. Others dismiss it as more relics of a past age with no connection to their order’s founder.

As the controversy rages, the abbot of the monastery sends Francis back to the desert to complete his meditations. When Francis returns, his ordination is delayed as the abbot fears that the new revelations might interfere with the canonization of Isaac Leibowitz. Francis is assigned to a menial job poring over manuscripts and schematics while advocates from the church visit the monastery to evaluate the work of Isaac Leibowitz. Soon after, Brother Francis becomes Father Francis.

While working, Francis finds a blueprint of an electrical schematic and recreates it in a gilded illumination. When Liebowitz is canonized, the abbot honors Father Francis by sending him to New Rome with the illumination he created and the artifact from which it was copied.

Along the way, Father Francis is set upon by bandits and his illumination is stolen. Francis counts himself lucky it was just the illumination that was stolen and not the relic. However, the pope wants the illumination recovered. He gives Francis gold and tells him to return to where he was robbed and pay ransom for the return of the illumination.

Francis returns to where he was robbed and waits. Once again, he is attacked. This time, he catches an arrow between the eyes and dies. The robbers make off with his gold. When the robbers depart, the wanderer who put Francis onto the artifacts of Liebowitz happens upon Francis’ body. He buries Francis in the desert as the frustrated vultures circle above, denied their repast.

Part Two: Fiat Lux (Let There be Light)
Part Two of Miller’s story is set in the year 3174. Centuries of study have finally started to yield results and a renaissance is underway. Father Kornhoer of the Order of St. Liebowitz has created electric light which he calls Electrical Essence. The single light is powered by four men on treadmills.

Tadeo asks to take the memorabilia back to Texarkana, claiming that it will take years to study it all and that it could be better done in Texarkana. His men have completed their military analysis and Tadeo wants to preserve the memorabilia from the ravages of war which he knows is coming from his brother. The abbot denies the request, having discovered Tadeo’s true plans. He instructs Tadeo to leave the monastery.

In Texarkana, the papal emissary to Hannegan’s government sends word to New Rome that Hannegan has united the nation states that surround him and plans to wage war on Denver, using the Monastery of St. Leibowitz as a military base. Hannegan finds out about Monsignor Apollo’s treachery and has him executed and declares fealty to the pope of New Rome a crime.

Part Three: Fiat Volantus Tua (Let They Will be Done)
It’s 3781 and mankind has recovered all of the technology of the earlier race of man – including space travel, nuclear power and nuclear weapons. It has also discovered cold warfare as two nation states, the Asian Coalition and the Atlantic Confederacy. Both sides are ramping up their preparations for real war, building nuclear weapon platforms in space.

When a test nuclear device is detonated, the priests at the monastery of St. Liebowitz grow worried about the future of mankind. They develop a plan to place the memorabilia aboard a spaceship with a manned crew to send it into space to find a new home on one of the outworld colonies.

The cold war turns hot when the two nation states exchange nuclear weapons. Texarkana is nuked and hundreds of thousands are killed and maimed. The World Court intervenes and is able to engineer a tenuous ten day cease fire to work toward brokering a full truce. The expedition to New Rome with the holy memorabilia of St. Liebowitz hopes to use this cease fire to transport the memorabilia to New Rome where they can board the spacecraft that will transport them to safety.

Meanwhile, to the abbey, comes a mutant woman named Mrs. Grales, who sells tomatoes at a roadside stand near the abbey. She wants to baptize her “baby” which is a second, seemingly lifeless head growing on her shoulders beside her functional head. She calls this head Rachel. Father Zerchi, the current abbot of the monastery promises to take it under consideration to humor her.

The abbot serves as a refugee camp as the wounded masses move west out of Texarkana. Meanwhile, near the monastery, a physician has set up a refugee camp where he engages in euthanasia for the badly suffering. Father Zerchi learns of this and argues with the physician about the evils of euthanasia. At stake are a woman and her baby. Both have horrid radiation burns. The woman’s fillings are radioactive and the baby cries constantly in agony. The physician administers the lethal drugs to the woman and her child, ending their suffering and effectively ending the partnership between the monks and the doctor.

He awakens to find that he is not alone. With him is Mrs. Grales. He offers to baptize the “child” Rachel. But Rachel, now alive and alert, instead administers the Eucharist to him in something resembling the immaculate conception and Mother Mary. Zerchi then dies, believing he has witnessed a miracle.

The mission to New Rome has made it and have successfully boarded the spacecraft. They launch and head for a new world, taking with them man’s technology, the seeds of its destruction.

As the book ends, nuclear war consumes the world. Mankind is destroyed. The creature of the ocean flee for deeper waters where they are safe.

A Canticle for Liebowitz is one of the most heralded and recognized of all science fiction work and fantasic post-apocalyptic fiction. Scholars have debated extensively its themes of religion versus state, the cyclical nature of history, and of course, the arguments for and against euthanasia.

While the novel is structured around the Catholic church, little Catholic doctrine (other than anti-euthanasia) makes it into the text. What is more prevalent is the church’s embrace of technology as a tenet of its faith and its dedication in preserving the earthly works of man.

Of the three stories told, Part One has the tightest plot. Father Francis is well developed as a character and his motives clearly defined. Part Two is less solid. Instead, it reads as an interlude, demonstrating the ongoing conflict between church and state. The plot picks up again in part three as the mission to New Rome desperately tries to get there before the world is nuked and Father Zerchi is left behind to oversee the end of his order at the hands of conflicting governments.

The whole holy conception thing was difficult to understand and did not work well. It was fitting that Father Zerchi, the last of his order dedicated to the preservation of technology, would witness an authentic miracle at the end of his life. However, the writing did not make it entirely clear what Miller was trying to say.

The end is bleak. Mankind has taken its technology and moved on to inhabit another world. But as the novel demonstrates, it’s in that technology and the cyclical nature of history that the seeds of civilization’s third demise are sown. The vignette at the end, with the shark fleeing to deep waters, where it remained hungry for a lack of prey, was chilling.

The book was apparently inspired by Miller’s bombing raids over a sixth century monastery at Monte Cassino during World War II.

This book stands as a staple of science fiction with the works of Isaac Asimov and Ray Bradbury. It was one of just two novels Miller published before he committed suicide in 1996. Miller is a recognized giant of the pulp publications of the 1950s where Asimov and Bradbury, along with others such as Robert Bloch and Richard Matheson were plying their trade in the 1950s. While Miller’s approach to science fiction is different than the action oriented works of Asimov and Bradbury, it’s examinations of theology, government, and man’s development of technology faster than the development of his conscience and intellect make it worthy on inclusion among the great works of science fiction.

Posted by Brian Schwartz at 4:57 PM