A Princess of Mars by Edgar Rice Burroughs

A Princess of Mars
By Edgar Rice Burroughs
Copyright 1917

Edgar Rice Burroughs broke new literary ground with his book, A Princess of Mars. In the writing, which was first serialized in the pulp magazine, All Story Magazine. By writing about traveling to Mars when traveling between two nearby cities in a wooden airplane was not commonplace, the fertile imagination of Edgar Rice Burroughs developed a whole new genre which we call today, science fiction. While writers like Jules Verne and H.G. Wells had cranked out a number of stories we call science fiction even today, it was Burroughs who laid down many of the parameters utilized by writers through the 20th century and into the 21st. 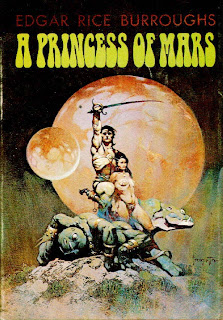 John Carter is a Virginia gentleman planter and veteran of the Confederacy. As a man who loves adventure, he set out for the American southwest to prospect for gold. While returning one day from his mine, he runs afoul of some Apache and is forced to flee blindly into the desert. Spotting a cave, he flees inward. This cave is actually a portal that transports him to the planet Mars. Carter’s adventure there is chronicled in a journal left for his nephew who is reading it to us.

Carter arrives in what he later finds out is a hatchery for Martian green people – a race of super large men and women who populate this part of the planet its inhabitants call Barsoom. He finds that he has the ability to leap high into the air and over great distances because of the reduced gravity on Mars and in an early fight with one of the Tharks, establishes himself as a great warrior. The Tharks – a culture made up of warriors and who value prowess in battle -- are so impressed they make him a high ranking official and a prisoner simultaneously.

Carter is assigned a female who is his caretaker and earns the loyalty of one of the giant creatures the green people keep as pets. He bests Thark chieftans in battle and moves up in the ranks of the Thark hierarchy, using his ability to leap as his primary attack and defense.

He is taken with the Tharks when they attack the red race of Mars who dwell in the city of Helium. While attacking one of the red Martian spaceships, the Tharks capture the princess of Helium, Dejah Thoris. Carter falls in love with Dejah upon seeing her since she closely resembles a human. He decides he must rescue her.

While the Tharks camp in one of the many abandoned cities on Mars, Carter, aided by another of the red Martians, is able to effect Dejah’s escape. He is attacked by the Tharks and bests their chief in battle. Tars Tharkas is installed as the new head of the Tharks. Tars Tharkas is different than other green men of Mars in that he experiences love, compassion, and respect in a culture otherwise dominated by violence and prowess in battle. He and Carter become friends.

Carter eventually marries Dejah Thoris and is Prince of Helium. As they are starting their new lives together, the processing station that makes the Martian air breathable fails. Over a period of a week, the people of Mars start to die of asphyxiation.

The resolute John Carter decides to make a last ditch attempt to enter the processing station and restore it. He takes with him an engineer who knows how the station works. Alas, he is too late. He succumbs to asphyxiation while entering the plant. He knows the engineer survived beyond him, but he doesn’t know if the plant was restored or if his love, Dejah Thoris survives.

He awakens in the cave from where he was teleported to Mars. He looks to the red star in the earth sky from time to time, wondering what happened to his beloved Dejah.

This book was a selection of my monthly book club. It garnered universal respect from our members for its originality and creativity given the era in which it was written. Most in the group enjoyed the story – including me. I gave it a “B” for story, noting that the first third of the book read like an anthropological study, and I gave it an “A” as a literary treasure – a wellspring for all of the science fiction literature I would enjoy in the years to come.

We have two English professors in our club. One, who is perhaps the best read person I know in the genre of science fiction, loves the book, having read it as a child and several times since. The other didn’t care for the writing, saying that Burroughs didn’t do enough to flesh out his action sequences. There is some truth to that. To paraphrase a fight sequence in Burroughs book, “I sprang among the many Tharks gathered and in just a few moments, they lie dead at my feet.”

Several in our group of approximately 15 people which includes four college professors, felt compelled to read the rest of the John Carter of Mars books right away. I did not. I am pleased that the book was recommended by my book club and I enjoyed the story. But, it was not so good I feel compelled to immediately take in the rest of the stories.

The book is actually a series of short stories first serialized and published in 1912, then bound and published as a book in 1917. Burroughs stands in good company with the likes of Sir Arthur Conan Doyle and others who went from writing short stories for the masses to great books for the educated, graduating from the pulp presses of the twentieth century. Pulps were the only avenue available to those who wrote outside of standard literature for more than half a century.

Edgar Rice Burroughs was the favorite author of President Ronald Reagan, according to his biographer, Lou Cannon. Reagan devoured Burroughs as a child and young man and even looked to those stories to inspire himself to develop a narrative for the Strategic Defense Initiative. As we know today, SDI, or “Star Wars” was mostly fiction and Reagan knew it. But the Russians didn’t. Ever the actor, Reagan prepared himself to play a fictional role as the proponent of a real prototype of a spaced based weapons system by reading his favorite science fiction author.

Burroughs is a legend in American literature. It was he who created Tarzan of the Apes and published more than two dozen Tarzan novels to go along with the dozen Mars novels he wrote. He penned westerns, adventure novels, and other science fiction books set on Venus, the moon, and other planets.

For fans of science fiction, Burroughs is an icon. While no one would compare his writing ability to the likes of Asimov or Bradbury who were superior men of prose, one must credit him for the structure and precepts of science fiction. While tracing types of literature to its wellspring is difficult and dicey, a case could be made that Burroughs invented hard science fiction. Given the billions of dollars earned in stories, books, and movies and the countless hours people have invested taking them in, that makes Burroughs one of the more prolific and extraordinary people in American history.