Book to Movie: Dance of the Dead (2005)
From the television mini-series, Masters of Horror
Directed by Tobe Hooper
Teleplay by Richard Christian Anderson

Richard Christian Matheson, son of horror writer extraordinaire Richard Matheson took one of dad’s more riveting short stories, expanded it, and made it into one of the finer episodes of this superb television series, Masters of Horror.

In young Matheson’s vision, we get flashbacks of World War III and a biochemical agent that kills or horribly disfigures those whom it contacts. Peggy has flashbacks to her sister’s birthday party when such an attack occurred and many of her friends were killed. When the attack comes, Peggy’s mother takes her two daughters into their home and locks the doors. The two young girls are forced to watch as The Fiz as it’s called, falls on their friends and neighbors and kills them.

All grown up to the sage age of 16, Peggy helps her mother tend to their diner in a rural town. World War III is over, but not much society or structure remains. The streets are essentially lawless (as in Matheson’s story). Young Matheson throws in an added element. Bandits rob people of their blood not for medical purposes, but for something vile and morally rancid.

Three of the group act as obnoxious and as intimidating as possible. One of the two young men, with hardened features and soft eyes (and played superbly by Jonathan Tucker) talks to Peggy. He entices her to meet him later for an adventure.

Mom spots the two mooning over each other and tosses out the whole group. She reminds Peggy that, with her older sister and father victims of the war, she has a duty to stay on and live a good and clean life. Most of all, she is to avoid the town of Muskeet, known for its lawlessness and licentiousness.

Her new beau, Jak, returns with his obnoxious friend and his girlfriend. She climbs into their car and they head for Muskeet. Along the way, they drink, huff inhalants, and “muscle tussle” which is slang developed during World War III which means to inject drugs into one’s muscle.

They arrive at a creepy pseudo goth club in Muskeet where Jak and his buddy are to sell their stolen blood to the club owner to give to his performers. While they deal with the owner, the girls are left to listen to the house band (featuring Smashing Pumpkins’ front man, Billy Corgan).

The deal for the blood is complete and the club host, (played over the top by Robert Englund), returns to the stage to announce the feature act of the night – Dancing Loopies. Loopies are dancing corpses. Loopy is slang for (L.U.P. or Lifeless Undead Phenomena). The MC assures everyone that what they are about to see is purely a scientific demonstration and not meant for entertainment. Such disclaimers are required by law.

An animated corpse is guided onto stage. Her body is fueled by the blood provided by bandits. Her dance motivated by repeated shocks from cattle prods wielded by stage hands. The dead body gyrates while industrial music pounds. Peggy is shocked and disgusted by what she sees.

Meanwhile, mom has found Peggy gone and pursues her to Muskeet. 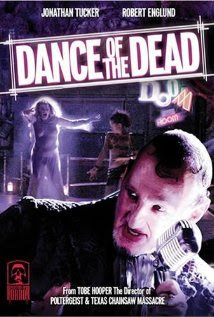 The next Loopy performer is brought on stage and the cattle prodders go to work. She thrashes and kicks until her body is exhausted. She falls forward off the stage and onto the table where Peggy and her friends sit. Peggy looks into the face of the twitching corpse and recognizes it as her sister. She freaks out.

The gallant Jak, having promised Peggy that nothing bad would happen to her, grabs the corpse and Peggy and heads out of the club. The MC, seeing one of his most valuable performers being stolen, pursues them.

They meet in the street, each with a gun trained on the other in a standoff. Just then, mom arrives to try to take Peg home. The MC demands the return of his property. He says it’s rightfully his because he paid for it. He proceeds to then tell the story of how he acquired Peggy’s sister in a deal he cut with Peggy’s mother.

Just when it seems that someone must die in the standoff, Peggy speaks up and says that she will settle up with the club owner.

We then cut to a scene where Jak and Peggy are burying a body while Peggy cries over it. As that fades, we return to the club where the MC is introducing his new Loopy – Peggy’s mother.

A tip of the cap to R.C. Matheson and Tobe Hooper on an excellent piece of television horror. Matheson’s story, published in the 1950s and set in 1997, was a creepy piece of post-apocalyptic horror. R.C. Matheson modernized it. He added a new conflict to give the story the heft it needed to translate into the visual medium.

Labels: Dance of the Dead, masters of horror, Nightmare at 20000 feet, Richard Matheson