Introduction
In the introduction to his fifth collection of short stories, Stephen King comments on the dwindling number of writers who still pen short fiction and how it is slowly becoming a lost art. King admits that he’d all but given up the craft of short fiction several years ago before being asked to edit a collection of the best fiction of 2006. Reading those stories rekindled his fondness for the “kiss in the dark from a stranger,” of which he was so fond in his youth. 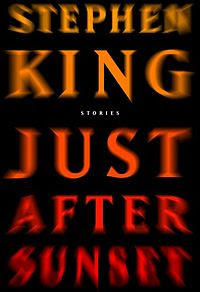 Willa
Passengers stranded by an Amtrak derailment wait patiently in a rural train station for the train or bus that is going to take them to their final destination. One man notices that his fiancé has disappeared. He finds her at a country western bar in a nearby town. Together, they discover the true state of affairs. That train is never coming to get them.

This read like a story published in The New Yorker rather than Playboy, where it was originally published. The story is thin, but the subtext is rich. We see how different people from different walks of life react to bad news. Some react with fear, some with denial, some with anger, and some with acceptance.

The Gingerbread Woman
A woman, distraught over the death of her daughter from SIDS, takes up running to deal with the emotional pain. Her marriage falls apart and she moves to Florida to a lonely cay where her father owns a home. There, she takes up running on the beach. One day while running, she notices that there is a body in the trunk of a neighbor’s car. When she investigates, the psychopath takes her hostage. When she breaks free, she finds herself running on the beach – for her life.

This story is the standard chase fare with little deviation from the standard formula. There is entirely too much back-story on the main character for a short story.

Harvey’s Dream
A man and a wife, trapped in a loveless marriage, start their Saturday morning breakfast routine. Harvey, usually incommunicado at breakfast starts to relate a dream he had the night before – a dream where he received a terrifying phone call in the night. For the first time in years, the wife is riveted on what her husband has to say, until the phone rings. . .

I know this was supposed to tap into the fear every parent harbors of his or her child dying. It’s an easy fear to tap because it is the ultimate terror. But this story didn’t do it. It’s short and King could have borrowed a little of the character development from the prior story to get me emotionally vested in this pair.

Rest Stop
A writer and college professor is making the trek back from his summer writing quarters to the university where he teaches. He stops at a rest stop along I-75 in Florida to relieve himself. When he enters, he hears a man beating a woman in the women’s restroom. The meek college professor is not sure what to do, until he assumes the personality of his nom de plume -- the writer of suspense and violence that lives inside him. Then he takes action.

King was inspired by real life events to write this story, having overheard a heated (but fortunately not physical) confrontation in a lonely roadside rest stop. The story is completely mainstream. No supernatural element is evident. It does resonate, however, making one – especially those of us small in stature and not prone to acts of heroism – think about what they would do in the same situation.

Stationary Bike
A commercial artist is told by his physician that he needs to lower his cholesterol. So, he purchases a stationary bike and sets it up in the basement of his apartment building. To make the daily grind of riding in place more tolerable, he paints a picture of a country road to put in front of him and starts tracking miles toward a destination in upstate New York. Soon, the road and the ride come alive for him. But he’s being pursued by the “people” he is hurting with his quest for health.

This story is fun until King wraps it up. Then, it gets insipid. Imagine baseball player Carlos Delgado, joined by David Berkowitz, working for a company called Lipid, cleaning up cholesterol from the roadsides of a man’s arteries. Yes, it’s just that foolish.

The Things They Left Behind
A survivor of 9/11 finds in his apartment belongings that were once possessions of coworkers who perished when the twin towers collapsed. He can’t explain their appearance and doesn’t try. He throws them in the garbage and tries to forget they ever showed up in his apartment. When he returns later that day, they are back. He tells his neighbor about the objects. She takes one, telling him that she’s sure that it’s all a mind game and once she has it, it will not return. A few days later, she comes to his apartment, haggard and worn out, to return the object. She knows everything there is to know about its former owner. She wants nothing more to do with it or him. That gives him the clue he needs to properly rid himself of the objects. He has several trips to make to various locales within the five boroughs.

This is a story about survival guilt. I suspect there was a lot of that going around post 9/11. The story is well paced and, while the resolution was easy enough to predict, it was still satisfying.

Graduation Afternoon
A girl joins her boyfriend and their friends at his graduation party at his parents’ Connecticut estate that overlooks the New York skyline. As the kids swim in the pool, a nuclear bomb detonates over New York City. The kids and adults stand in awe and disbelief.

This was based on a vivid dream King had while suffering withdrawal from a drug he was taking while recovering from his accident. The story is great because its opening keeps the reader guessing – making them believe it is going to be a coming of age story. The bomb comes out of nowhere. This story was originally published in the magazine, Postscripts.

N
A man receives a package from a childhood friend whose brother, a psychiatrist has committed suicide by jumping off of a Maine bridge near where they grew up. With the note, asking for his insight, is a case file about a patient identified as “N.” The narrative from there is a case file of a man who came to the psychiatrist for treatment for obsessive/compulsive disorder. The onset of this disorder came shortly after N learned that a field in rural Maine was a gateway to another dimension and that the eight stones positioned there kept a horrific creature from entering our world. Soon, the psychiatrist finds himself caught up in the mystery of the Maine field.

This story reads very much like Ramsey Campbell’s The Towers of Yuggoth. It also very much resembles an H.P. Lovecraft story where the hero fears that the “Old Ones” are going to make it into our dimension. King must have recognized the similarity to Lovecraft right away, because he dispels the notion in his Notes section. Not Lovecraft, King tells the Constant Reader. Think Arthur Machen and The Great God Pan.

The Cat from Hell
A hitman is summoned to the mansion of a pharmaceutical company CEO. The CEO wants to take out a contract – on his cat. The hitman takes the $12,000 and thinks it will be the easiest money he’s ever made. But this cat has put four people in the ground already and isn’t done.

Serious King fans will recognize this story as an installment from the 1990 movie Tales from the Darkside: The Movie. It dates back to his adult magazine days and King assumed that it had been published in one of his earlier collections. Now, it finally sees the light of day (unless you own the old issue of Cavalier magazine where it was originally printed). It was a pleasure reading the previously unpublished prose of the young Stephen King.

This is vintage King as far as style. The story is short, taut, and to the point. It contains a poignancy not found in his earlier writings, providing the reader with King’s finest writing elements. This was a rare instance of King short fiction that left me wanting more story. Well done!

Mute
A book salesman picks up a hitch hiker who claims he is deaf and mute. As they travel, the salesman spills his sad story of adultery and betrayal. His ex wife has been having an affair with a teacher in the school system where she works in the accounting department. Compounding the woe is the fact that she’s embezzled more than $20,000 for them to play the lottery. When the pair stop at a rest area, the salesman leaves the man alone in his car. When he returns, he finds some of his possessions – including his St. Christopher medal, stolen. A few days later, his wife turns up dead. Left at the scene is his St. Christopher’s medal. He relates the story to a priest in a confessional. The priest asks him many tough questions before granting absolution.

I’ve often commented on how some King stories would work as Twilight Zone episodes or Outer Limits episodes. This story would have worked as an episode of that early 1960s television show, Chiller, hosted by Boris Karloff. The reader is not surprised by the conclusion, but King never tips his hand. It made for most satisfying reading.

Ayana
A man and his family wait as their father slowly dies of cancer. One day, a little girl comes into his hospital room and kisses the dying man and his son. The dying man makes a recovery and goes on to live for several more years. His son spends the next several years passing on that miracle kiss.

This is an upbeat, hopeful story based in the supernatural. A little long, but well told.

A Very Tight Place
An older man is lured to a worksite by a business rival and trapped in a portable toilet, turned over on its side and left to die in the sweltering Florida heat. While lying in the contents of that toilet’s tank, he struggles to escape.

It’s an old, tired premise of the person trapped in a seemingly inescapable prison, but finding a means to escape. King goes for the “gross out” factor a little in this story (another tactic he seldom deploys) and his writing ability makes the otherwise tired premise work.

Posted by Brian Schwartz at 2:58 PM