Book to Movie: The Omega Man (1971)
Screenplay by John Corrington and Joyce Corrington
Directed by Boris Sagal
Based on the novel I Am Legend by Richard Matheson

Unlike, The Last Man On Earth which closely resembled Richard Matheson’s post apocalyptic vampire story, The Omega Man goes far afield of Matheson’s vision. In this version of the story, the vampires are actually a cult of light allergic stalkers who plot to kill Robert Neville who appears to be the last living man on earth. 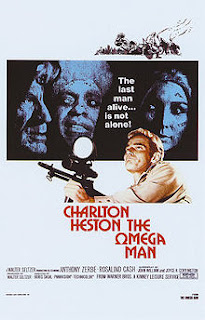 The movie opens with Robert Neville cruising through the empty streets of New York in a stunningly beautiful 1971 Ford Gran Torino convertible. He puts on some easy listening music, then brandishes a machine gun and fires into a building window where he sees movement.

Much like the novel, we are seeing Robert Neville (Charlton Heston) go through his daily routine. He wrecks his car and "buys" a new one. He stops and watches the movie, Woodstock, held over for a third year, reciting all the lines to the dialogue. He also hunts vampires.

The vampires of The Omega Man are intelligent and cunning, lead by a messiah called Matthias. They are very much like hippies. They call each other “brother” and refer to themselves as family. They want to kill Neville because he is the last of a race that used medicine, weapons, machines, electronics and such to bring about the world’s end.

They really aren’t vampires in The Omega Man because there is no reference to them needing or desiring blood. Bullets kill them without a problem. They are mutants who want to rid themselves of Neville – the obsolete man – and begin society anew.

We learn through flashbacks that Neville was an Air Force doctor, working on a serum for a pandemic that emerged from germ warfare waged in a Sino-Soviet conflict. Most people who caught the disease died in a matter of hours. Others ended up like Matthias and his followers – unable to withstand any form of light.

Neville lives on the fifth floor of a Los Angeles apartment building. He has a bust set up in a chair to which he talks and is his chess “partner.” Unlike Neville of Matheson’s novel, he doesn’t have the passionate hatred of the vampires. It’s the vampires who are full of hate. Neville watches them nightly as they burn books and machinery in the streets to eradicate relics of the old world. He's rather dispassionate about it.

One day, Neville is shopping for new clothes when he hears a noise. He is surrounded by mannequins, but one of them twitches, then bolts. He gives chase, but the woman eludes him. He returns to the store, picks out his clothes and is examining the liquor selection when he is attacked and captured by Matthias’ followers. He is knocked unconscious

He awakens in a football stadium, chained to an alter. Matthias is preaching the gospel of the new race of undead when suddenly the stadium lights come on, blinding the undead. A group of people rush in to release Neville. One of them is the woman he chased from the department store. She points a gun at him, tells him to get on a motorcycle and drive. She gets on the back and the pair escape from the stadium.

They flee into the mountains where Neville finds there are a few other humans who are not yet infected or are in the earliest stages of infection. Lisa – the woman who rescued him (and played by Rosalind Cash) is the only adult female among the group. There is one man – a former medical student – and a small group of children and teenagers. One of the teens has contracted the disease and is lapsing into an undead state. Neville volunteers to take him back to the city to work on a serum to cure the disease.

He and Lisa take Richie back and put him up in Neville’s apartment. Using his own blood which contains antibodies he injected into himself near the end of the collapse of society, he creates a serum and is able to reverse Richie’s condition. They prepare to rejoin the others in the mountains and then move on to someplace where they can start over.

Lisa goes into town to get clothing. Neville stays with Richie. When Richie awakens, he asks Neville to share his serum with Matthias and his followers. Neville tells Richie it isn’t worth the effort. Richie tells Neville to either save them or kill them. Neville plans to do neither. He just wants to move on.

He tells Richie to return to bed to rest. He heads back to the mountain retreat to tell the people there to prepare to move onto a new location.

While he’s gone, Richie decides to approach Matthias and tell him that Neville has the cure for what ails them. Matthias is an adherent of the new gospel that preaches that the old ways are wicked and evil. He has no desire to see man returned to his former state. He kills Richie.

When Neville returns, he finds Richie’s note and heads for the undead’s lair. He finds Richie’s body, but finds that the undead have moved out. He then hears them marching through the streets, headed for his place. He jumps into his vehicle and heads out. Before he can make it back, he wrecks and is taken hostage by the Matthias’ followers.

Someone else hears the undead marching. It is Lisa. Except now, she’s infected and joins them. She apparently lets them into Neville’s apartment because they are there waiting for him when he’s brought in. He is tied up and made to watch as Matthias and his people completely wreck his place. They tell him they have destroyed his art, his science, his machines, and his old way of life that led to the destruction of the human race. They prepare to kill him.

He breaks loose and flees outside to the fountain in front of his building. There, he encounter’s Lisa who is not quite so far gone she that she doesn’t have affection for Neville, but sees herself as one of Matthias’ people. Neville is trying to coax her away when Matthias tosses a spear from the balcony of Neville’s apartment and pierces his chest. They leave him for dead.

The next morning, the doctor and the kids arrive to pick them up and find Neville near death, the pool full of blood. Before he dies, he hands the bottle of serum over to the doctor and slumps down dead, his arms splayed to simulate a crucifixion. The doctor finds Lisa hiding in some shrubs nearby. They put her in the truck and head off with the serum and the promise of a new life.

I’m not sure this movie resembled Matheson’s story enough that they had to give him any credit. Movies like 28 Days Later were as much similar and make no reference to Matheson.

Having said that, the movie is an average post apocalyptic thriller. Heston’s performance is standard Heston fare for that time and his mere presence lifts the movie. The plot is linear, but well paced and there is enough action to keep the viewer engaged.

What is apparent is the allegory of the rise and fall of the counter culture of the 1960s. Making Neville the last bastion of establishment that the new counter culture can’t quite kill sets that tone. The patois of the undead was obviously supposed to be hip.

Some of the cinematography was great with the open, abandoned streets of Los Angeles looking surreal. In other parts of the movie, the robes and pasty faces of the undead made those scenes look like a casting call for Scream!. Those robes and the silly hippie jargon take away from the movie. Maybe it was easier to take seriously in 1971.

It was a different story with different characters, bereft of subtext, and a goofy allegory. Nonetheless, as a fan of post apocalyptic movies I enjoyed it. It won’t rival other Heston sci-fi dystopian features such as Planet of the Apes or Soylent Green, but is worth watching and not a bad movie.