The Regulators By Stephen King (writing as Richard Bachman)

The Regulators
By Stephen King (writing as Richard Bachman)
Copyright 1996

Released as a companion novel to Desperation, The Regulators takes the characters (or the character names) from Desperation and places them in the Columbus, Ohio suburb of Wentworth, and subjects them to Tak’s less than tender mercies. 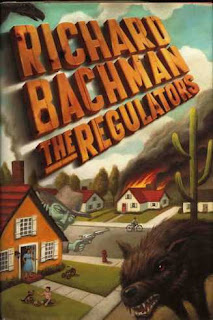 It’s a sunny summer afternoon in the bucolic suburb when three garishly painted vans make their way down Poplar Street and start shooting up the place. The neighborhood paperboy is the first to die, followed by suburban housewife, Mary Jackson, racing home from an afternoon delight session. Others are badly wounded. As they bullets fly, the other residents of Poplar Street take refuge in two houses.

While the residents of Poplar Street cower in horror, Audrey Wyler lives in her own little hell contained within her home of Poplar Street. This is where Tak has taken up suburban residence, brought here in the body of young Seth Garin, an eight year old boy afflicted with autism.

The reader learns that Seth was traveling through the Nevada desert with his family when they passed the city of Desperation. As they pass Desperation, Seth, who is usually silent and can only talk in short monosyllables, begins begging in full sentences to be taken to Desperation to see the mine there. Shocked by this miraculous development in Seth, the family heads to Desperation. There, they get a tour of the mine – including the old China mine where Tak is imprisoned. Seth runs inside where Tak enters his mind apparently rendered susceptible by his autism.

Upon returning to their home town of Toledo, Ohio, The Garin family dies in a series of tragic accidents. Seth is taken in my his aunt Audrey and uncle Herb. After just a month, Tak forces Herb to commit suicide. Audrey is left alone with a monster who eats Chef Boyardee products, drinks chocolate milk, and watches a kids show called MotoKops 2200 and an old spaghetti western movie called The Regulators. It is from these two programs that Tak redevelops Poplar Street into his own version of the old west, protected by the cartoon characters from MotoKop 2200.

In the home of Peter Billingsley (a retired veterinarian as he was in Desperation) Collie Entregian (a former Columbus cop fired for political reasons) and Steve Ames (now a guy moving across country for a new job who got lost getting off the interstate) decide to make for an area called the Greenbelt which is a wooded area behind the houses on the other side of Poplar Street. They hope to pass through there undetected by the MotoKops in the vans and get to an unaffected area where they can call the police.

In the house next door, a pair of teenage twin boys have the same plan and head for the greenbelt. Neither group is aware of each other.

As they make their way to the greenbelt, they noticed that the neighborhood is being transformed. What was once suburban Ohio is being transformed into the old west. Hitching posts appear. Houses are converted into cabins. Cacti grow where trees once blossomed. Sand replaces grass.

The expedition to the Greenbelt goes badly for everyone. Collie Entregian is killed by a shotgun blast from one of the twins who did not know who he was. Steve is attacked by a mountain lion and badly injured. The twin who did the shooting commits suicide. The group makes it back to their respective houses just as the MotoKops return to shoot up the neighborhood some more.

Tak has the ability to control some people who are weak and can control Audrey when he wants to, although it requires a great deal of energy. He hopes by killing the people of Poplar Street he will gain power and expand his influence.

To escape Tak’s control, Audrey flees to a place in her mind where it is 1982 and she is vacationing with her best friend, Jan. When Tak is in control of him, Seth has his own place in his mind where he flees. When they are in these places, they can communicate without Tak knowing. Audrey develops a plan to free Seth of Tak.

While preparing his chocolate milk, she fills it with a laxative. She knows that Tak can’t stand to be around when Seth performs his bathroom activities. Seth is soon afflicted with diarrhea and heads for the bathroom. Tak steps out of Seth’s body, waiting for him to finish.

Audrey seizes her opportunity. She grabs Seth from the toilet and flees next door, leaving Tak alone and without a body or mind to enter. Seth, knowing that he is the cause of all of the misery, telepathically tells a girl hiding there (Cammie Reed – mother of the twin boys) to kill him and Audrey. Cammie, distraught with grief and full of rage, kills them. Tak enters Cammie’s mind, weakened by her insanity brought on by grief. However, there is enough of Cammie left that Tak can’t completely dominate her. Tak rages and makes threats, but is not strong enough to act. Finally, unable to do anything, Tak destructs, blowing Cammie’s head apart.

The world of Wentworth, Ohio is restored to what it once was, except many people are now dead. The survivors are left to resume whatever lives they can.

The book concludes with a letter from a woman staying at the Mohonk Resort where Audrey spent that week in 1982 with her friend, Jan. The letter is dated 1986 – ten years before the events on Poplar Street in Wentworth, Ohio unfolded. The letter talks about the ghosts of a woman and a boy that haunt the place. The woman has found a picture. In that picture are stick figures of a boy and a woman holding hands, standing outside a small house. The reader is left to assume that, in another plane of existence, Seth and Audrey are living happily ever after at the Mohonk Resort.

The Regulators was a horrid book that was little more than a marketing gimmick to boost sales of the pair of companion novels.

In the book liner, there is a fictional backstory of how the deceased Richard Bachman’s widow found the manuscript and submitted it for publication. The author’s photo is actually a well known, old photo of Stephen King taken when he was in college.

While Stephen King excels at character development, his alter ego apparently shuns it. The characters in The Regulators were paper thin. They had no backstory, no personality, and no apparent motivation beyond the thin plot. The reader is given absolutely no reason to care about these people at all.

Tak, as a villain, is not developed either. The reader is given zero information as to Tak’s origin, motivation, or ultimate goal.

The plot, such as it was, was haphazardly put together and was incredibly linear. The mishmash of spaghetti westerns and children’s sci-fi action adventure was poorly executed. The reader is left wondering why the MotoKops were even a part of the story. It would have been much more effective to have the bad guys from The Regulators movie shoot up the suburb.

The only entertaining part of the book is an interlude between chapters where the Desperation mining engineer, Alan Symes, recounts in a deathbed letter, of his encounter with the Garin family when they showed up and asked for a tour of the mine. That was well written and Alan Symes, who is the most minor character in the book, becomes the best developed and most sympathetic.

The Regulators was a painful book to read and is, by far, the poorest of the Bachman works. I panned Desperation in my review or it. But compared to The Regulators, Desperation is a masterpiece. There is scarcely anything good to say about the book and it should have never been published. It ranks very near the bottom of King’s body of work and was his worst book prior to the publication of Lisey’s Story 10 years later.

Casual fans of horror should avoid this book. If you’ve never read Stephen King before, please do not read this book. If you are a King fan, read it if you must. But know that when you are done, you’ll wonder if the master of horror fiction lost his senses sometime in the mid-1990s.

Posted by Brian Schwartz at 9:49 AM