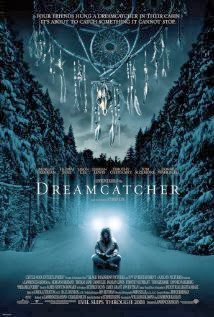 Goldman and Kasdan stick very close to the story as it was laid out by King in the novel. The four friends have gathered in the hunting cabin. Two go off into the stormy night for groceries when the aliens invade.

The only redeeming quality of the novel was the strength of two of the main characters, Henry and Jonesy. In the movie, they were insipid and under-developed. While the story languished for being over-told and the villain was a cartoon character, it was hard not to like Henry and Jonesy. In the movie, the viewer just isn’t made to care enough about them.

The novel’s weakest point was Jonesy locking himself in the Tracker Brothers’ depot in his brain and hiding “files” that were his memories. This concept is introduced earlier by the filmmakers, with Jonesy telling his friends about his warehouse of memories and how he has a secret filing drawer where he keeps his secrets. This was good screenwriting, lest the notion make even less sense to movie goers than novel readers. While it was just a warehouse of Jonesy’s own conjuring as opposed to the Tracker Brothers, it still didn’t work.

Col. Kurtz (Curtis in the movie, played by Morgan Freeman) was one dimensional in the novel, coming across as a caricature from a bad political cartoon. Kasdan changed him up a bit. Instead of a caricature, he is not developed at all. We’re given just one instance of his mania – when he shoots the soldier for letting a woman and her four year old daughter leave the quarantine area. Otherwise, Freeman plays Curtis like a straight military man. Not much of a villain.

In the movie, Henry reads Owen Underhill’s mind and appeals to his since of decency. He asks Underhill what his wife and daughters would think of him if he knew of the slaughter that was about to take place upon his commands. This puts in motion the events that lead to Henry escaping and heading to Derry to find Duddits.

Duddits is very much like the Duddits of the novel and Andrew Robb, who played young Duddits played him quite well, as did Donnie Wahlberg. Unfortunately for the two actors, like every other character in the novel, Duddits is underdeveloped. We are never shown the closeness that developed between the four friends and their mentally challenged sidekick. We are treated to a scene where Duddits constructs a Dreamcatcher that links the four -- a scene that wasn't in the book. But this link and how Duddits achieved it, is never explained or even alluded to.

The chase dominates the last third of the book with Kurtz chasing Underhill for revenge and Underhill and Henry chasing Jonesy and Mr. Gray to save the world. The chase should have been the climax to the movie, but was really quite dull. Instead of setting off like a renegade, abandoning his command, Curtis is relieved by a general and surrenders quite docilely – said general having been tipped off to Curtis’ intention to slay the prisoners by Underhill.

Curtis doesn’t figure into the chase until the end when he arrives by helicopter. All of the good writing King did in the novel with Henry tempting Mr. Gray with things like bacon are deleted. When you delete the only good writing from a bad novel to make your movie, you’re making a bad movie worse. Kasdan could have done so much better with this aspect of the novel.

Certainly worse movies have been made based on Stephen King works. But no movie based on a Stephen King work was based on a worse work. Dreamcatcher was an awful novel that made a horrible movie. The changes Kasdan made in the plot were not worse than King’s writing, but they did not improve upon the story.

The movie had a strong cast with Freeman, Wahlberg, Timothy Olyphant and Tom Sizemore. With Kasdan -- who directed The Empire Strikes Back -- at the helm, one might expect them to salvage the meandering Stephen King story and make a better movie. The best that can be said is the movie is no worse than the book. They did no harm.

Hardcore fans of King consider Dreamcatcher a must see movie because it is based on one of his larger works. But as a movie, it is poor viewing. Many bad movies have a scene or two that is memorable and make the viewing not a totally wasted effort. While there is nothing in Dreamcatcher to make the movie fan groan in disgust, there’s nothing memorable about it either. The best scenes are lackluster. The worst parts are forgettable, and the movie itself is not worth the effort to watch.

Posted by Brian Schwartz at 8:19 PM