Punish the Sinners By John Saul

Like most John Saul novels, Punish the Sinners opens with a prologue that provides clues to the conflict to come. A young boy is playing in his parents’ room when he hears his parents coming. He hides in the closet. As his parents are making love, his sister enters the room and inexplicably murders them with an axe. 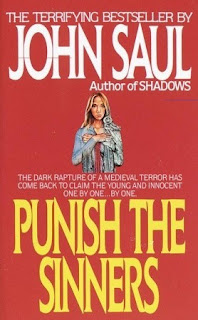 Flash forward more than 30 years and Peter Balsam, former aspirant to the priesthood, is invited to teach psychology at St. Francis Xavier High School in Neilsville, Washington. His old friend from seminary, Monsignor Peter Vernon, is principal and wants his old friend to join them.

As they talk during the school year, Balsam notices that his old friend has become rigid and judgmental over the years. He has an affinity for the saints who were Inquisitors – specifically, St. Peter Martyr. He has a group of priests who meet regularly in his office. They call themselves the Society of St. Peter Martyr.

Balsam settles into his teaching job and Neilsville. He meets a divorcee and starts a relationship with her, much to the consternation to the predominately Catholic populace of Neilsville. His classes are going well until one young student attempts suicide.

When more girls kill themselves or try to do so, parents and staff start to focus their blame and ire on Peter Balsam, suspecting that his psychology class is undermining Catholic theology taught in the church. Peter Vernon presses him to join the Society.

Finally, Balsam agrees. At the first meeting, the other priests question him aggressively about his belief in church doctrine, much like the inquisitors of old. At a subsequent meeting, he passes out and has no memory of what has transpired. At Margo’s urging, he wears a tape recorder to this meeting. Balsam and Margo listen to the tape and hear with horror sounds of sexual ecstasy from the priests and from Peter.

As Peter Balsam presses his investigation of the suicides, he becomes convinced that Peter Vernon and the Society of St. Peter Martyr are using mind control to push these girls – all part of the same clique – to commit suicide. The local psychologist dismisses Peter’s suspicions. He’s inclined to believe that Neilvsville is afflicted with a suicide contagion.

Peter resolves to get to the bottom of Peter Vernon’s obsession and the plot to kill the girls of St. Xavier. He sneaks into Vernon’s office one night and starts reading the contents of Vernon’s file cabinet. He finds newspaper clippings that describe the “modern-day Lizzie Borden” who slaughtered her parents whilst her little brother watched. Peter Vernon was that little boy.

Vernon bursts into the room and catches Balsam by surprise. He murders Balsam there in that study and makes it look like suicide. Peter Balsam is buried in unconsecrated ground in an unmarked grave. His grave is repeatedly desecrated and vandalized by townspeople who believe Balsam responsible for the suicides that afflicted Neilsville. Saul leaves us with the fact that, once a year, a young girl commits suicide on Balsam’s grave.

While not being exceptionally well written, Punish the Sinners stands apart in the John Saul canon.

Most John Saul novels are simply stories. They have no subtext or social commentary. Punish The Sinners examines the conflict between traditional Catholic Church doctrine versus a more contemporary view. This is the only novel where Saul examines any subject of any consequence.

Saul’s views are quite clear on the subject. The strong beliefs and unyielding passion of Peter Vernon were certainly cast in the role of evil. Balsam’s more humane and contemporary views were heroic. Saul is also clear on who he thought was winning. Evil triumphed good in Punish the Sinners. This is also unique in Saul’s canon when good always triumphs over evil.

What is more remarkable about this novel is its presience. This conflict would not come to the fore until a couple decades after Punish the Sinners was written. Also addressed on the periphery of the novel is sexual deviance which became the defining issue for Catholics in the 2000s.

Another issue in the book not typically discussed in decent company in the 1970s was teen suicide. Peter and the hospital psychologist debate the phenomenon of suicide contagion. The suicide contagion is the idea that when one teen commits suicide, other teens get caught up in the romantic notion of suicide and kill themselves. In a more modern era where teen suicide is addressed openly as a social affliction, suicide contagion and how it works is an issue of public discussion.

This social and religious debate and subtext is unique in Saul’s canon. Also unusual is the fact that Punish the Sinners is not a particularly well plotted or well written.

Saul’s books are all plot driven. He plots carefully and seldom leaves holes or gaps. He provides great twists that are believable and well conceived. Punish the Sinners has several gaping plot holes that detract from an otherwise dark and riveting novel.

We never learn just how it is that the Society of St. Peter Martyr and Peter Vernon are able to engage in such dominating mind control? It all takes place out of sight of the reader. What was the motivation? The reader learns in the twist that Peter Vernon was that little boy who witnessed his parents’ murder when Saul leads us to believe through most of the novel it was Balsam. But nothing in the text shows us how that hatred of young girls grows and festers. The hate is just there. More development of the malice would have improved this novel immensely.

I have read Saul’s entire library. I have enjoyed all his novels to varying degrees. However, I look at many Saul novels sitting on my bookshelf and have no recollection of the characters or the plot. They don’t stick with me. This book has stuck with me over the years because it is so dark and does provide that social commentary and subtext.

John Saul is regarded as a good horror writer among those who read horror. But he is never mentioned in the same voice as the greats of the genre. One wonders how his stature might have been different had he continued to provide subtext and social commentary in his novels.

Posted by Brian Schwartz at 7:26 PM