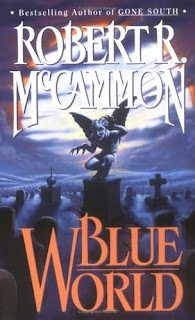 This is McCammon’s only volume of short stories. This volume includes:

A young woman and her two children run out of gas in a strange town straight out of the Twilight Zone. It seems the hot summer brings out the bees --- and they terrify.

A small time thug ends up with the makeup case of a famous horror actor. Was the long deceased actor brilliant, or was the secret in his makeup? One of the better stories in the book.

Brad wakes up one morning and finds the wife he went to bed with the night before has turned into a desiccated corpse. He wanders about the town and finds himself alone – almost! This reminded me of a Twilight Zone episode. This story is the kind that Stephen King used to be able to write. Nothing but the barest essence of a story here. But the plot is intriguing and chugs right along. Masterful writing!

A strange traveler comes in from a storm into a truckstop and brings the stuff of his nightmares with him. Seems his old buddies from Vietnam are eager to have him join them where he left them. This one reminded me a little of Straub’s Koko only much better.

This is a strange, first person narrative of a young man contemplating sticking a needle in his eye. This is the weakest story in the book. I’ll give McCammon credit for a creative approach and an unusual story. However, I did not care for it.

A voodoo man keeps a gold finch in his prison cell. The bird is his familiar who keeps him informed of all that is going on in the prison. The only well-kept secret in the prison is the voodoo man’s. I like a good prison story (King wrote two brilliant prison stories) and McCammon did not disappoint me with this one.

An ordinary game of Scrabble between the most incredibly average family in a most unusual setting. Again, just the bare essence of story, but McCammon makes the most of his few words.

He’ll Come Knocking At Your Door

Halloween is taken very seriously by members of this community and its leading citizen is generous with his treats but evil with his tricks. Reminiscent of Hawthorne’s Young Goodman Brown.

In a home with a abusive, alcoholic father and despondent mother, a child with a special gift lives and thrives. Perhaps the weakest story in the book.

An over-the-hill star of Saturday serials is called out of retirement by his conscience to find the serial killer who killed his neighbor. This story is hokey and cornball, but well written and a pleasure to read.

A young boy’s dad is outraged when a bright red house springs up in his entirely gray world. An excellent allegory on why sometimes change should be feared!

Earth is in decline after the passage on an interstellar object. The people who are left in the end pass the time in a variety of ways. This one reminded me of an old radio show like X Minus 1 or Dimension X.