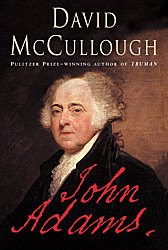 McCullough’s biography of this revolutionary hero, statesman, and president is the best non-fiction book I've ever read.

McCullough carefully reconstructs the life of our leading patriot, first vice president, and second president. He reconstructs Adams' relationship with his loving and supportive wife, Abigail, his adoring and sometimes wayward children, Thomas Jefferson, George Washington, Benjamin Franklin (whom he did not care for), and other contemporaries.

History has portrayed Adams as a regal aristocrat, detached from his countrymen and favoring monarchical government. While McCullough does not dismiss this assessment, he does demonstrate how Adams believed in the Revolution, believed in American independence, and believed in democracy and federalism.

Adams disapproved of the actions of the Sons of Liberty led by his cousin, Samuel Adams, who frequently engaged in civil disobedience and radical behavior in the name of independence. However, the calm political leadership of John Adams, Thomas Jefferson, and other members was in synergy with the brazen Sons of Liberty in declaring our independence of the motherland and establishing the world’s first true republic.

The Vice President in the 18th, 19th and early 20th centuries took their role as President of the Senate seriously. Adams established this precedent. He presided over the Senate daily and cast 29 tie-breaking votes, surpassed only by John C. Calhoun in his influence on policy in the Senate as its presiding officer. However, Adams detested the vice presidency and grew resentful of Washington who was still a national hero. For all his acclaim as a general, Adams felt he'd be a better president.

As president, Adams stubborn nature, regal attitude, and rebuke of the conduct of the rebels and their execution of their opponents in the French Revolution quickly made him unpopular with Congress and his countrymen. He did provide steady leadership in keeping America out of a formally declared war it could not win, kept the national economy stable in a time when banks printed their own money, and helped open the west for national expansion.

For all that he accomplished however, he will always be stained by the Alien and Sedition Act. This act, advanced by Adams and signed into law, made it illegal to criticize the actions of the government. It stands as perhaps the most un-American action by any president in history. With French immigrants flooding the country as France descended into chaos, there was much agitation for war. Adams was pilloried for being an anglophile and his detractors claimed he wanted to establish for himself a new crown in the US. The Alien and Sedition Act was designed to silence these critics. McCullough partially excuses Adams conduct by putting it in the context of the times and the events. While I an ardent foe of engaging in the fallacy of historical presentism, it must be noted that there is a reason why the first amendment is first among the constitutional amendments. It is from the first amendment that all other freedoms flow. Adams cannot be pardoned for such an egregious curtailment of that freedom.

The relationship between patriots Adams and Jefferson is one of the most complex and studied in American history. It is usually told from Jefferson's point of view because Jefferson has fared better in history. When examined from Adams' point of view, it is not hard not to sympathize with Adams' disgust with his former friend, especially his callous treatment of Abigail. Jefferson was a cunning politician and usually vicious to his adversaries. He and Adams strongly disagreed over foreign policy and the slings and arrows directed at Adams by Jefferson were slanderous and libelous.

It is hard to imagine such enmity developing between two close friends whose partnership created a new nation. But the feelings on both sides were strong and bitter. The two men did not speak for many years. Late in their lives, after Abigail had died and Adams was an elderly widow, their friendship was rekindled. It was once again a warm relationship between two men looking back with humility at the nation they birthed.

McCullough is kind to and reverent of Abigail Adams. There is no doubt that Abigail Adams was possessed of an intellect far above most women of her day. Her mind was sharp as was her tongue. She was Adams’ closest advisor in all things political and private and Adams would not have risen to his high status in colonial and American politics without her counsel.

Biographers of her son, John Quincy Adams, are less complimentary of Abigail. Paul Nagel lays at Abigail’s feet the alcoholism that plagued her children and her grandchildren. Much like Joe Kennedy did to his sons, Abigail drove her sons hard to succeed. All of the Adams children strove for Abigail’s approval, but seldom got it. Nagel as well as JQA biographer Francis Russell and Robert Remini agree with this conclusion. They acknowledge her intelligence and her positive influence on John Adams’ career in politics, but conclude that she was a domineering, overbearing mother, mother-in-law, and grandmother.

Alcohol would become the bane of the Adams family. Alcoholism can be genetic and Abigail’s uncle and grandfather were both alcoholics. John Adams greatest misery lied not with his constant battles with the Francophiles, Benjamin Franklin, and Thomas Jefferson. It was his constant worry over his sons who – with the exception of John Quincy Adams – battled the demon alcohol unsuccessfully throughout their lives. Unfortunately for Adams, he would live long enough to see his grandsons fight and lose that same battle.

One of the most engaging bits of writing I’ve ever read was McCullough’s description of the treatment of Nabby Adams' breast cancer. Nabby was the Adams’ oldest daughter. When began experiencing chest pains and found a lump in one of her breasts, even doctors of that era recognized a tumor and knew its only treatment.

Keep in mind, there was no anesthesia at that time. Nor were their surgical clamps or any real surgical technique. Yet the breast had to be removed. While McCullough is tasteful and does not engage in gratuitous gore, it is impossible to not be moved by the account of the doctor taking a sharp knife and cutting off Nabby’s breast while she bit down on a stick.

The exceptional quality of this book lies not in its subject. John Adams, while fascinating in his role of shaping the nation, is not the most fascinating of presidents. It is David McCullough’s writing. The world is full of great historians who unearth new ideas and points of view through tedious study of primary documents and newly discovered material. However, a writer of McCullough’s ability is rare. He has peers in historians such as Stephen Ambrose and Francis Russell. But McCullough is the best.

HBO made a five part miniseries based on McCullough's book. Adams is portrayed admirably by Paul Giamatti. The miniseries is true to history and to McCullough's account. It is entertaining and engaging even for someone not dedicated to the study of American history or the American presidency.
Posted by Brian Schwartz at 1:24 AM