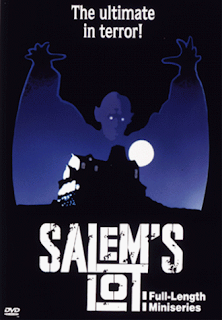 ‘Salem’s Lot was the second Stephen King novel to make the transfer from print to celluloid. Carrie was the first in 1976.

Horror fans seem to hold this particular King adaptation in low regard. Perhaps it is the 1970s era, made for television production values. Perhaps it was the fact that David Soul of “Starsky and Hutch" fame played the lead. Given the cultural and technological limitations of the day, Tobe Hooper’s ‘Salem’s Lot captured the essence of the King novel.

When books are converted into movies, characters are often eliminated or amalgamated. This is necessary because a film must have a sharper focus and quicker pace than a book to keep the audience engaged. Books develop characters in a much stronger manner.

In the 1979 version, the important character of Dr. Jim Cody is amalgamated with Susan Norton’s father. The story is not well served by this. Dr. Cody was an especially important character in driving the plot as Ben Mears decides to confront the evil in ‘Salem’s Lot. Bill Norton, as Susan’s father, is essential in the development of Ben Mears as a gentleman. The combination weakens both elements.

Also weakened in the mini-series is the teacher, Matt Burke whose name is inexplicably changed to Jacob Burke – perhaps to give the character more intellectual heft. It is the Burke character that provides the intellectual underpinnings of the story in what is otherwise a tale of supernatural madness.

In 1979, Burke was played by a white, frail, Lew Ayres. He did the best he could with the script but was poorly cast. Much stronger in the role in 2004 was Andre Braugher. He was black and homosexual. Neither is a factor in the story, but strengthened the character to show that this black man was of strong enough character to be accepted and admired in a provincial New England town. As Rob Lowe pointed out in the narrated opening, his homosexual lifestyle was tolerated and unspoken of as long as it was practiced in Portland. Both factors made the character more interesting.

The much maligned David Soul was strong in the role of Ben Mears. Soul’s blond, feathered hair and Hollywood good looks were a dramatic departure from King’s depiction of Mears as a dark haired, average looking, silent type. Despite his pretty boy persona, Soul’s performance is serious and dark. His character and its development were played straight from the book and Soul gave Ben Mears all the heroic traits of a King lead.

Also strong in Tobe Hooper’s interpretation are the monsters Straker and Barlow. Straker, played by British character actor James Mason is unfailingly polite and courteous in his evil – like the King character. For all of Donald Sutherland’s strengths as an actor, his portrayal of Straker is somewhat maniacal and menacing.

In 2004, Barlow had the rugged, middle-aged good looks of Rutger Hauer. 1979’s monster was pure monster. We get brief glimpses of him and one full scene of his character as he’s killing Mark Petrie’s parents. He is a direct copy and perhaps homage to F.W. Murnau’s Graf Orlok from Nosferatu – the first vampire to ever grace a movie screen. This throwback to vampire film’s roots is much more terrifying.

Lance Kerwin’s appearance as Mark Petrie may be another drawback for serious horror fans. Kerwin is best remembered for his 70s teenie bopper role in "James at 15." Kerwin can be forgiven his work in that adolescent fluff for his portrayal as the last child standing in ‘Salem’s Lot is every bit as strong and dark as that of Soul’s.

The 1979 mini-series – character amalgamations aside – is a direct, if abridged, interpretation of the King novel. ‘Salem’s Lot is perhaps the first tale to transport the traditional vampire mythos to America didn’t need much refinement to make it a good move.

I prefer the 1979 version to the 2004 version because it was made in the 1970s. The book was written and set in the 1970s. It was in the 1970s that I first saw it. That was the decade of my childhood when imaginary scary things were much scarier. The technological and cultural refinements in the script (Straker telling the sheriff that most of their antique business was done over the Internet, for instance) that update the story for the 21st century do not serve the story.

But what of our all-important Father Callahan who will emerge in the telling of the Dark Tower story? In the move, we last see him confronting Barlow in the Petrie kitchen. His character is never given defined closure. However, the viewer can safely conclude he met his end which contradicts what we know of his story.

While the 1979 version did not serve the story of the Dark Tower, it is undoubtedly a worthy adaptation of the King novel and superior to its 2004 redux.
Posted by Brian Schwartz at 11:19 PM