Book to Movie: Carrie (1976)
Screenplay by Lawrence D. Cohen
Directed by Brian DePalma
Based on the novel Carrie by Stephen King

Stephen King’s first book was made into a hit movie before his second book was published. The modest success of the novel and the smash hit movie set the stage for the most prolific writing career of the 20th century.

As I said in my review of the book, the movie very closely follows the novel up until the end. The opening chapter of the book which is a newspaper account of the White house being bombarded with rocks is omitted. The movie opens as Carrie has her first period during gym class and is taunted by the girls. 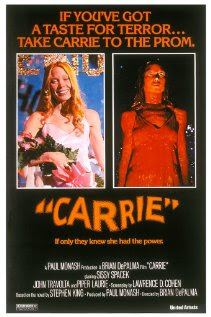 The gym teacher complains to the principal who dismisses Carrie. The girls (featuring first time actors Amy Irving, P.J. Soles, and Edie McClurg) have to serve their detentions with the gym teacher. Chris Hargensen walks off the field in frustration and is suspended. The scene with Chris’ father is omitted.

We are introduced to Margaret White in a Cohen drafted scene when she drops in on Sue Snell’s mother to preach the gospel. It’s apparent then that Piper Laurie is going to steal the show with her over the top performance.

One scene is added that gives us a deeper understanding of the character Tommy Ross. The setting is a classroom and all of Carrie’s tormenters are there. A teacher reads aloud a poem written by Tommy Ross. He asks for critiques. The class is silent until Carrie mumbles, “It was beautiful.” The class snickers and the teacher proceeds to make fun of and belittle Carrie. Tommy mumbles, “You’re an asshole.”

Sue Snell asks her boyfriend, Tommy Ross, to ask Carrie to the prom. Miss Collins (the gym teacher) is suspicious of Sue’s motives and questions her and Tommy intensely. She gives up, knowing there’s nothing she can do about it.

Meanwhile, Chris Hargensen recruits her boyfriend, played by John Travolta in his first movie role, to kill a pig and supply the blood for her vicious prank.

Carrie makes her dress and her mother begs her not to go. Carrie pins her mother against the wall and leaves with Tommy.

The prom scene is a nice bit of cinematography. They arrive at the prom and Miss Collins is there to greet them. She is delighted with Tommy’s gentlemanly behavior and delighted that something nice is happening to Carrie. She and Tommy dance. The dance is shot from a camera mounted on a rotating platform on the floor, circling the couple. It makes for a disorienting, disturbing scene.

Meanwhile, Chris and Billy Nolan wait under the stage to dump the blood. Norma (P.J.Soles) fixes the ballots to elect Carrie and Tommy king and queen. They take the stage. The band plays. Carrie basks in the acceptance of her classmates as they applaud. Then the blood drops.

Carrie stands frozen, her face a rictus of rage. Sissy Spacek delivers her finest acting performance at the movie’s climax. For a moment, the crowd stands in stunned silence. Then, they start laughing. Carrie looks down and sees everyone laughing (in a scene shot through a prism lens). Even Miss Collins is laughing.

Carrie closes the door and starts yanking out wires with her mind. The gym goes dark, then the fire starts. Panic ensues.

Carrie leaves the gym and starts toward home. Chris and Billy have escaped as well. As Carrie walks along the street, Billy tries to run her down. Carrie turns and causes the car to flip over and burst into flames.

Here, Cohen writes a new ending that worked well. Instead of rampaging through town, destroying buildings and killing people, Carrie heads home to mama, looking for solace. Carrie’s mom embraces her and tells her the story of her conception; of how her virtuous and saintly father got drunk one night. It started out as rape, but mama admits, she enjoyed it.

Then Margaret White does what she perceives to be the Christian thing. She does not suffer a witch to live and stabs Carrie in the back. Carrie is stunned and mortally wounded. She responds by using her telekinesis to propel knives at Margaret. Margaret’s hands are pinned to the wall by knives before Carrie puts one into her heart, killing her. She looks like Christ on the cross in her moment of death.

Carrie pulls Margaret from the wall as she starts pulling the house down around them. She crawls to her closet and embraces her mother until she dies. The house burns and crumbles around her as she slips away.

We then move forward a few days and are in Sue Snell’s bedroom. Her mother and doctor are attending to her. The doctor leaves as Sue lays sedated upon the bed. Mrs. Snell is commiserating with a friend on the phone how tragic it all was. Sue is dreaming.

She walks to the empty lot where the White home once stood. In the center of that lot is a cross. On that cross, someone has painted, “Carrie White Burns in Hell!” Sue approaches the cross. She’s wearing a virginal white gown and carrying white flowers. She kneels before the cross and drops the flowers at its base. Then, with a bloody hand shoots forth from the ground and grabs Sue’s wrist. She wakes up in uncontrolled hysterics. There, DePalma ends his movie, zooming out from Sue Snell as she’s gripped by mania in her bedroom.

King once said that he thought the movie did so well is because, when it was made, nobody knew who Brian DePalma was and nobody knew who Stephen King was. Few people had read the book. There were no expectations or preconceptions based on reputation.

The movie did well at the box office and launched the careers of Sissy Spacek, John Travolta, and P.J. Soles. It launched Brian DePalma’s career as a director and proved very early in his career that Stephen King’s stories were box office draws.

DePalma uses some unconventional cinematography in the film that adds to its appeal. The camera mounted on the spinning platform to shoot the dance scene whilst romantic music plays in the background is disorienting. He uses split screen to show the chaos at the prom. Carrie’s emotional mania after having been doused in pig’s blood is heightened by the disconcerting use of the spinning prism lens. And the hand coming out of the ground made me jump like no other “gotcha” scene in the hundreds of horror movies I’ve viewed.

Much of the credit for the quality of Carrie must go to Lawrence Cohen who knew just what to take from King’s story, what to leave out, and what to change. Cohen recognized the value of the story and did not tinker with the plot at all, much to his credit. Cohen fleshed out the character of Tommy Ross, upon whom the story pivots. In the novel, King left him under developed to the detriment of the story. Finally, Cohen gave us a more climatic ending which worked better on screen than the one King wrote, which worked very well in the book.

Carrie ranks very high on the list of Hollywood adaptations of King’s work. It’s not the refined, mature work brought to the screen like The Shawshank Redemption or The Green Mile. Nor is it the epic two or three part television miniseries. Carrie was just a horror movie with no allegory or metaphor. But it was great horror with a sympathetic and tragic heroine, despicable antagonists, and a plot that moved.

Posted by Brian Schwartz at 5:36 PM