Book to Movie: The Legend of Hell House 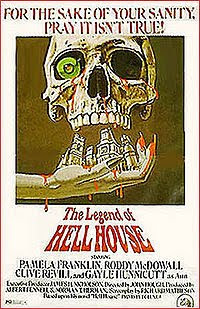 One of the comments made as our book club discussed Richard Matheson's Hell House was that it read very much like a screenplay. This comment was not made to disparage the entire book. The reader was disappointed in the ending because he said it had that “Hollywood ending that is neatly wrapped and all things are answered.”

I agree with this critic’s assessment, but was cool with the ending. The story was paced like a movie. Matheson was a prolific screenwriter in his day. His work for the big and small screen is nearly as extensive as his published work.

After completion of the novel, Matheson adapted it for the big screen, resulting in the 1973 movie The Legend of Hell House. It starred Roddy McDowell as Ben Fischer, Pamela Franklin as Laura Tanner, Clive Revel (who has been lost in history as the voice of the original Emperor Palpatine in the theatrical release of The Empire Strikes Back) as Lionel Barrett, and Gayle Hunnicutt as Ann Barrett.

The movie was shot in England with an all British cast. Therefore, instead of a large Maine estate, the Belasco House more closely resembled a castle. Eliminated from the original novel were the pivotal scenes in the sauna and the pool as well, since castles apparently don’t come equipped with those things. There is no dangerous tarn for the characters to wander into and there is no Bastard Bog, but the castle is Gothic enough to make for a spooky setting.

Also gone is much of the erotica. It is there, but Matheson’s narrative is much more risqué than what appears on the screen.

Of the cast, McDowell’s work was the strongest. McDowell’s Fischer was several years younger in the movie than he was in the book and his failed expedition occurred in 1954 as opposed to 1940. He is much more intense than the character portrayed in the book.

The movie was fun, old fashioned haunted house fare, as was the novel. It lacked the camp of House on Haunted Hill. It lacked the dark, brooding terror of The Shining, and the quiet darkness of The Haunting (1963 version).

However, the production values are sharp – looking very much like an early Hammer film. It is well-scripted with Matheson adapting his own work It is well directed, and despite the ‘70s penchant for overacting on occasion, is well performed. While there is better Matheson work on the big screen out there, this movie is definitely worth seeing just to enjoy some of Matheson’s work.
Posted by Brian Schwartz at 6:42 PM