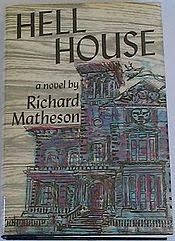 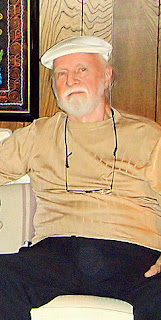 This was a book of the month selection for my books, cigars, and scotch club that meets monthly. Apparently I nominated it in an off the cuff remark I made to the organizer of our group. I have read it before and found it to be an excellent haunted house novel. Haunted house stories are my favorite!

A millionaire hires a physicist, Lionel Bennett and his wife Ann; a mental medium, Ben Fischer; and a spiritualist, Florence Tanner, to stay in Belasco House and prove conclusively the existence of life after death. The physicist brings with him equipment he is sure can capture and neutralize what haunts Hell House. The spritual medium is convinced that if she can reach that which haunts the home, she can set his soul free and end the haunting. The mental medium, the lone survivor of an earlier expedition that claimed three lives, hopes to survive his time there and collect his fee.

Upon their arrival, they are met with a recorded greeting on a phonograph from none other than Belasco himself. Shortly thereafter, the horror ensues. The entity that haunts Hell House attacks each, exploiting their weaknesses and self-doubts.

Bennett struggles to get his equipment assembled so that he may use science to dispel the poltergeists. Tanner reaches out to Daniel Belasco, Emeric’s son whom she believes is the tormented soul that bedevils them. It’s science versus spirituality in a race to meet Hell House’s demons.

Matheson is really the polar opposite of Stephen King in his approach to writing. King weaves complex characters, intricate backstories, and numerous subplots into his narratives that make for long novels. Matheson uses words sparingly. He drives a story through dialogue and action. His stories are sleek and taut. These divergent styles work for their respective authors.

None of the characters here have extensive backstories. We know that Bennett was stricken with polio which has left him impotent since childhood. He is quite secure in this. We find out, however, his wife, while always believing she was willing to lead a sexless marriage, sees her latent sexual desires thrust to the fore as Hell House manipulates her. The sexual tension in this novel is palpable and while not graphic, there is a fair amount of true erotica in Matheson’s prose. This erotica is the genesis of much of the interaction between the characters as each fights and pursues Belasco and his supernatural minions that allegedly haunt the house.

Hell House's backstory is really the rivalry that exists between science and spirituality. Barrett has dedicated years of research to the development of his equipment. His reputation and livelihood are riding on it. He is certain he has developed the means to prove the existence of discorporated spirits in our plane of existence.

Tanner wants to reach out to the tortured son of Emeric Belasco, believing the torment of being reared in such a decadent environment has poisoned her soul. She wants to save him from his torment and release his soul and end the haunting of Hell House. Barrett dismisses the existence of Belasco and pursues his science. Tanner ignores Barrett’s constant references to the science of haunting and pursues her spiritual quest. We find in the end that Belasco has made provisions against each approach.

King rates Matheson’s book as “. . .the scariest haunted house novel ever written.” High praise indeed, but not true in my estimation. I think King surpassed Hell House with The Shining. I would also rate Shirley Jackson’s The Haunting of Hill House as superior as well.

That’s not to say that Matheson doesn’t weave a spooky tale. This month’s category for our book club was “summer page turner.” A page turner this book is indeed! The story is fast paced, compelling reading, and creative in its climax.

What fascinates me about Matheson is the breadth of the man’s writing. He is a screenwriter par excellence. His work on The Twilight Zone with Rod Serling and Charles Beaumont was groundbreaking for television. He, or others, have adapted several of his books for movies. The best known is I Am Legend which was made as The Last Man on Earth with Vincent Price in 1964, The Omega Man starring Charlton Heston in 1971, and as I Am Legend starring Will Smith in 2004.. But he is also the creative force behind such movies as The Incredible Shrinking Man, Stir of Echoes, Somewhere in Time (based on his book, Bid Time Return), The Box (based on his short story, Button, Button), and What Dreams May Come starring Robin Williams. The great Stephen Spielberg cut his teeth on movie making when he brought the Matheson novella, Duel, to the big screen in 1971.

Besides the Twilight Zone, his work can be seen in the original Star Trek in the episode The Enemy Within, the short lived but underrated Circle of Fear television series of the early 1970s, and the cult favorite Kolchak: The Night Stalker which ran but one season in 1974-75 but has legions of fans today.

I would invite those who enjoyed his work on the big screen and the small screen to pick up something he has written and discover what a talented genius this man really is.
Posted by Brian Schwartz at 12:04 AM