Nixon: The Education of a Politician 1913-1962 by Stephen Ambrose 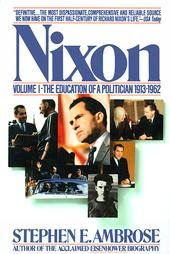 This first volume in a three volume biography chronicles the early years of Richard Nixon’s life through his unlikely and lackluster campaign for California Governor in 1962.

What emerges from Nixon’s early life is how much he loved his parents and siblings. He idolized his oldest brother, Harold who died of tuberculosis when Nixon was a pre-teen. Harold was known as a fun-loving prankster – just the opposite of the taciturn Dick. When he died, family friends said young Dick felt as if he had to be twice the son to help assuage his parents’ grief. When a younger brother died of tuberculosis, Nixon redoubled his efforts to be a good son.

Young Nixon was very much like the old Nixon (there was always a “new Dick”). He was serious, motivated, and competitive. He was a gifted and precocious debater who took his schoolwork seriously. In college, he excelled in his studies and road the bench for Whittier College’s football team.

At Duke law school, Nixon got a taste of real poverty. The Nixons were middle-class, but they had known tough times. While at Duke, Nixon lived in what amounted to a tool shed. As one might imagine, Nixon ranked high in his law school class.

Nixon practiced some “little ball” law in Whittier before joining the Navy during World War II. He was a commissioned officer and given command of a supply depot in Bouganville. One would not expect the nerdy and physically awkward Nixon to command the respect the blue-collar toughs that worked for him, but they developed a strong respect for the guy and liked him. He was never “one of the guys”, but neither was he a snob or a recluse. He developed a knack for the game of poker.

Upon his return from the Pacific, he was drafted by a committee of local Republicans to run for Congress against Democrat Jerry Voorhis. He had found his calling.

The campaigns against him and Senator Helen Douglas were run ruthlessly. Few had ever doubted Nixon’s character as a young man. Many in California came to doubt it after these two campaigns. Nixon was brutal -- resorting to questioning their loyalty as Americans. One of the contributors to his campaign against Douglas was none other than Joe Kennedy – with the check delivered to Nixon’s senate office by young JFK himself.

Nixon’s rise to fame is documented well in Ambrose’s biography. The key event in his rise was his dogged pursuit of Communist Alger Hiss. His investigation into the corrupt state department official launched him to national fame. Nixon was shrewder and more calculating than Joseph McCarthy who was as dumb as he was reckless. Nixon also had the good taste to be correct in his allegations.

His dogged pursuit of commies while in the senate attracted the attention of the Eisenhower campaign, who had offended party regulars by “stealing” the Republican nomination from party stalwart Bob Taft. Nixon was a party regular, had strong anti-commie credentials, provided geographical balance to Ike’s Heartland origins, and was a deft campaigner. Nixon rode Ike’s short list of VP nominees all the way to the convention that nominated him for the number two spot on the ticket.

Ike remained above barnstorming campaigning. That was Nixon’s duty. Nixon crisscrossed the country, bashing Democrats for supporting socialistic policies and leading the nation down the path of communism. While Ike’s inner circle had reservations about Nixon’s tactics and statements, they could not argue with his results. Ike could have got elected with anybody as his running mate. But to have credibility with party regulars (who give the most money), Ike needed Dick. He also needed Dick to help him with Congress (which Ike did not understand) and with the profession of politics (which Ike loathed).

Ambrose is also an Eisenhower biographer and details the complex relationship Ike had with Nixon. He liked Nixon, but was never close to him. He respected Nixon’s sharp intellect, grasp of foreign affairs, and unsurpassed political skills. But yet, he was reluctant to give Nixon any affirmation. He tried to talk Nixon off the ticket and into the cabinet before the 1956 election. He refused to endorse him in 1960 until late in the campaign and badly embarrassed him with a glib remark.

Meanwhile, Nixon disagreed with many of Ike’s policies. Chief among these policy disagreements was Vietnam. Nixon and CIA director John Foster Dulles were anxious to aid the French in their fight against the Vietminh. They saw it as a proxy war against communism and were eager to engage the Reds. Ike was less inclined to enter America in another war.

Nixon also sought affirmation from Ike – affirmation he seldom got. Nixon, like everyone who knew him, held Ike in the deepest regard and respect. Ike was a great war hero and the Commander in Chief – a position Nixon had coveted since his days in Congress.

Ambrose characterizes the campaign between Nixon and Kennedy in 1960 as brutal. Ambrose made that characterization before the campaigns of 2000 and 2004. The modern election that most resembles the 1960 campaign was the 1996 campaign between Bill Clinton and Bob Dole. Like Clinton and Dole, the candidates genuinely liked each other. They had come into Congress together and served in the Senate together. They had shared a berth on a train as they barnstormed the country debating the contentious Taft-Hartley Act.

Kennedy attacked Nixon on being soft on Communist leader Fidel Castro. Nixon had to tow the Ike line because Ike was secretly planning the invasion of Cuba. Nixon, as Vice President, did not want to make strong anti-Castro statements that could be attributed to administration officials. This hurt Nixon.

Nixon made a tactical error by promising to campaign in all 50 states. In the final days of the campaign when Nixon should have been hitting swing states, he was in remote locations making good on that promise.

He was also felled by phlebitis during the campaign. This put him in the hospital for several days and physically hampered him through the final weeks of the campaign. Perhaps telling of the mutual respect in politics that is gone now, Senate Majority Leader and Kennedy running mate Lyndon Johnson, stopped by the hospital and visited with Nixon while he convalesced.

Ultimately, the election would be one of the closest one in history with just 100,000 votes separating the two candidates.

Nixon had strong evidence of a stolen election in Texas and Illinois. Ambrose mentions this, but sadly, does not analyze it enough. Nixon’s case was strong and he could have mounted a challenge to the Kennedy victory. But he did not want Ike to order a Justice Department investigation. He wanted to maintain the peaceful and smooth transition in power that has always been the case in the United States. He was the patriot that Al Gore never could be and John Kerry could only aspire to be. Nixon gave up his aspirations of power for the good of his country.

Nixon would return to California to run for governor in 1962. But his heart was not in it. He did not want to be governor and he knew it before he ran. His “last press conference,” where he told the press that they would “not have Nixon to kick around anymore,” is described in great detail.

The book leaves off as Nixon would enter what he would call “his time in the wilderness” nearly stealing fame for the phrase from Winston Churchill.

Pat Nixon’s life is wedded nicely into this Nixon biography. She was an intelligent and insightful woman – far from the “Plastic Pat” that her detractors portrayed. She, like almost all women of her generation – stood behind her husband quietly. She was a doting mother who dedicated her public life to assuring her children had something akin to a normal life.

The Nixon marriage always seemed devoid of passion – or even genuinely caring. Nixon rarely put his arm around her in public, seldom danced with her in public, and never kissed her in public. He seldom acknowledged her in public. Yet she was fearlessly and faultlessly loyal to him and genuinely loved him. Those who knew him well (and few did) never questioned his love for her. By all accounts, Richard Nixon was a perfect husband.

Nixon gets high marks as a father too. The greatest testament to one’s parenting skills is the affection returned by their children. Many bad homes produce “good” children. Few bad homes produce affectionate children. Nixon’s daughters, Tricia and Julie adored him as children, as teens, and as adults. No one ever questioned Dick Nixon the parent. He probably ranks highest among presidential parents for his parenting.

Ambrose did not write this book as a Nixon admirer. He is up front about that. He never voted for Nixon. But he is fair to this most controversial of politicians – lauding his intellect, compassion in civil rights, and patriotism. He seldom is directly critical. Rather, he leads the reader there and leaves little room for the reader to disagree.

Ambrose was not only a brilliant and insightful historian, he was a gifted writer in the same league as (although not quite as good) as David McCullough. He did not deserve the petty accusations of plagiarism that haunted his final days. Fortunately for those who truly appreciate this man’s contribution to our body of knowledge of our nation’s presidents, Ambrose will always be one of the icons.
Posted by Brian Schwartz at 3:01 PM