Sturgeon is Alive and Well by Theodore Sturgeon 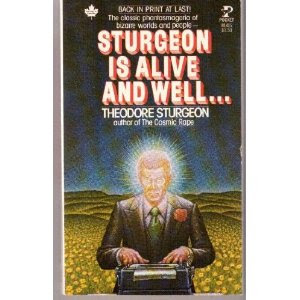 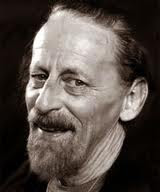 Sturgeon is Alive and Well
By Theodore Sturgeon
Copyright 1971

Theodore Sturgeon was a writer of science fiction in what is known as its Golden Age, or the era before, during, and following World War II. His contemporaries include Ray Bradbury, Isaac Asimov, Robert Heinlein, Robert Bloch, and A.E. Van Vogt. Although he only wrote a few television scripts, older members of Generation X will remember his work on Star Trek, having penned the episodes “Shore Leave” which is an acceptable if not memorable episode and “Amok Time” which is a much more powerful and well known episode. He is the creator of Star Trek’s famous ”Prime Directive” that was integral to many episodes and spin off shows that followed. He died in 1985.

To Here and the Easel

A blocked painter conjures up in his mind an alternative world where he is held prisoner by an evil magician. In that world, he must escape the clutches of the magician and save a princess. In this world, the blank canvass torments him, so he uses money to exercise some sort of influence within the prime material plane. A female interloper tells him to rediscover his talent, he must find out why he paints.

This was actually published as a short novel in an anthology of short novels published by Frederick Pohl in 1954 entitled Star Short Novels. The story very much reminds me of Lovecraft in the use of the imagery that Lovecraft was so wont to borrow from Lord Dunsany. These were not my favorite Lovecraft stories, but Sturgeon makes judicious use of that imagery in crafting his alternative world. The artist’s flaunting of his bizarre behavior in our world is also entertaining. The end of the story, however, I think is a bit of a cheat since the reader wasn’t given any of the clues necessary to anticipate the twist.

A woman afflicted with breast cancer goes to an unconventional healer who injects her with a mysterious drug and tells her unquestioned faith is needed for the drug to work. As she strengthens her resolve and her faith, she helps the healer delve deep into the nature of his mental affliction to help him excise the “disease” that afflicts him.

This is much more character study than story. But the characters are developed through interaction and dialogue with each other rather than constant introspection. I tend to look more for a plot driven story when reading short fiction, but Sturgeon’s approach to developing the loan characters of his story makes it engaging.

This one read like an hour long television drama. It contained not an element of sci-fi or fantasy. Just like the previous story, this story was purely a character study and the study of the give and take of relationships and the problems when one gives more than the other. I am usually disappointed when I find a piece of “mainstream” fiction folded between my usual genre fare, but I wasn’t disappointed in this story.

I also enjoyed Sturgeon’s informal style of writing here. The narrative lapses from independent narrative to first person narrative and, on occasions, into second person narrative which all our high school creative writing teachers told us to eschew. The greats know how and when to thumb their noses at the comp teachers and stray from the rigid tenants of structured writing. To do so is to dare greatly for there is a reason our instructors warned us away from the non-conventions: they are exceptionally difficult to do well and fail horribly when their done less than perfectly.

A mildly deranged man arrives in a local bar and starts problems with the patrons. His “caretaker” is summoned to retrieve him. A curious patron walks home with the “caretaker” and learns his odd, but compelling reason for making sure that Joey stays out of harm’s way.

This is a classic story of irony. Well told with a climax that is difficult to predict.

A spaceship carrying a probation officer and her charges crashes on a remote planet that they were to settle and be reformed. The probation officer is hurt badly. She gives each of them private instructions and tells them they must carry a crate to a nearby settlement if they are to survive. The kids learn about themselves and each other as they carry their burden and carry out the final wishes of their ward.

The sci-fi setting is tertiary to the story. It could have been set in an American desert and accomplished the same thing. While the story was completely different, the character development made me recall Lord of the Flies.

The Girl Who Knew What They Meant

A man marked for death by the mob holds up in a low rent motel. No matter where he hides, the mobsters find him, call him, and tell him the precise date and time his death will occur. He meets a woman with whom he falls in love and she changes his destiny.

I don’t know if the woman in the story was incredibly intuitive, or if she had some supernatural power. She is well written while his character is the barest essence of development. The formula works and this is a great story.

This was perhaps the weakest story in the book. It has no major flaws. But it’s message is not veiled or disguised in any way. The characters are also bit like caricatures.

It Was Nothing – Really!

A scientist emerges from the bathroom, his pants about his ankles and toilet paper in his hand. He demands that his secretary come immediately to his office and take a memo. That memo becomes the object of desire of the government who will stop at nothing to learn its contents.

This story contains a note of dark humor and overflows with keen observation about the nature of the cosmos. The greatest scientific revelations lie in the simplest of things.

A brilliant scientist develops physics’ Holy Grail – the perpetual motion machine. Convinced that its applications will create Heaven on earth, he makes his discovery public. Only, the governments of several countries and the captains of many industries will stop at nothing to prevent its commercial development.

This story is incredibly average. The economic and social upheaval of the mythical perpetual motion machine have been plumbed in other works. However, the interaction between the hero, Mensch and his wife, Fauna, make the story interesting enough to read.

Uncle Fremmis is a man with a knack for making things work. But he can’t fix anything except dinner. He also has a way of making people “work” more efficiently. His nephew relates Fremmis’ tale of how he got that way and the man behind it who wields incredible power for good.

Electrical and mechanical altering of conscience is pervasive in science fiction. This is a worthwhile take on that premise. The narrative voice is well written and makes the story an easy read.


The Patterns of Dome

A soldier has been planning a political assassination since he was a teenager, painstakingly planning every detail and conducting a decade long charade. However, when he goes to carry it out, his plan is thwarted. Those who thwart his attempt are convinced the only way to bring down a despot is to make him immortal.

Best story in the book! Great story with intrigue and irony! It also contains some real sci-fi content, which is unusual for this book.

A man decides to end it all by jumping off a cliff. But, when he lands alive, but badly wounded, he struggles to survive. Why?

This was an interesting, albeit brief character study. Just a little more background on what brought the man to the cliff would have given us some insight into why he was there.
Posted by Brian Schwartz at 3:28 PM