The Dark Tower Volume 2: The Drawing of the Three by Stephen King 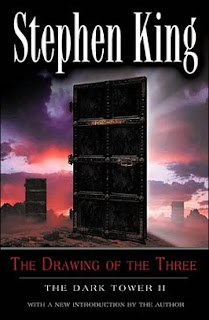 The Dark Tower Volume 2: The Drawing of the Three
By Stephen King
Copyright 1987

The book starts off where the first left. Roland is on the beach, pondering how and where he will meet the members of his ka-tet that will join him in his quest for the Dark Tower.

As he sleeps, he is attacked by carnivorous lobsters who bite deeply into his foot and bite off two of his fingers, making him a one-handed gunslinger. He begins walking down the beach with no clear destination. Infection sets in and he becomes more and more delirious. Just as he realizes that he’s dying, he comes a door standing in the middle of the beach. Seemingly, there is nothing on the other side but more beech. Written on the door is, “The Prisoner.”

Roland opens the door and enters the body of Eddie Dean, a heroin junkee who is aboard an commercial flight, smuggling cocaine into the United States. While inside of Eddie, Roland is able to wade through the extreme culture shock and language barrier to determine that Eddie is in deep trouble because he will not be able to complete the ritual of “Clearing Customs.” Roland takes control of the jittery Eddie and moves quickly to hide the cocaine where Customs will never find it. After intense questioning, Customs officials are forced to let him go for lack of evidence. Eddie and Roland, inhabiting the same body, head for Eddie’s home in New York.

Roland and Eddie have two crises to deal with. First, Roland is dying and needs medication available in Eddie’s world. Eddie procures some aspirin to help soothe the fever, but the infection rages unabated and Roland needs antibiotics.

There is also the matter of the rightful owner of the cocaine who has learned of Eddie’s interrogation at the hands of Customs officials and suspects Eddie is trying to set him up.

In the end of the first chapter, Roland and Eddie escape with their lives back to Roland’s world where Eddie has come to except, he must dwell for awhile.

Roland’s fever and infection abate some and Eddie joins him as they stroll down the beech. Roland, now a one handed gunslinger, reluctantly gives Eddie his other gun. He plans to train Eddie as a gunslinger.

They come to a second door in the middle of the beech. On it is written, “Lady of the Shadows.” Eddie wants to get back to New York and to a heroin fix. But her learns that the New York beyond this door is the New York of the early 1960s. He stays behind, angry and holding a knife to Roland’s prostrate body.

Roland jumps into the body of Odetta Holmes who is also Detta Walker. Odetta is a wealthy black woman active in the civil rights movement. He is bound to a wheelchair because, years before, an unknown assailant pushed her off a subway platform into the path of a train. Her legs were amputated. She is refined, educated, and graceful.
Detta Walker is the opposite. She speaks in a comical caricature of African-American patois. She curses and she steals. She’s vindictive and mean. She is suspicious of everyone and hates white people more than anything.

Both women inhabit the same body. Neither is aware of the other, although both are coming to suspect something is amiss in their lives. Odetta’s/Detta’s mind changed when, as a young girl, she was randomly struck on the head by a brick that just happened to fall form an abandoned building as she and her parents walked by.

Roland enters Odetta/Detta just as Detta is about to steal some cheap costume jewelry at Macy’s. Detta’s incredibly shocked and angry to find Roland – a white man – inhabits her body. Roland wrestles her for control and takes the wheelchair through the store to the door where they are catapulted back into Roland’s world.

Roland is in bad shape in his world. Using penicillin Roland stole in Odetta’s/Detta’s world, Eddie nurses him back to health as they travel along the beech, Eddie carrying Roland on a litter.

When they arrive in Roland’s world, Odetta moves to the fore with no idea how she has arrived in Roland’s world. Eddie tries explaining it to her, but she won’t hear reason. As they begin to travel, Odetta disappears and Eddie, dragging Roland’s litter, must push the contrary Detta down the beech with Detta sabotaging him constantly.

Eddie is finally forced to leave Roland, recovering and still weak, to scout ahead and find the third door. Eddie must take Detta with him to keep her from harming the gunslinger.

After a day of travel, the beech comes to an end and the travelers can see forest ahead of them. At the very edge of the forest, they find the third and final door, labeled, “The Pusher.” Eddie leaves the calm and civil Odetta behind, taking her wheelchair to transport Roland back to the door. Eddie gathers Roland and they head for the door. When they get there, Odetta is gone.

Eddie searches frantically for Odetta. Roland makes his jump into another world, arriving in New York of 1977. He is in the body of Jack Mort, an accountant who is about to push a 10 year old boy into traffic to kill him. That boy is none other than Jake Chambers whom Roland allowed to die as he pursued the Man in Black. Roland acts quickly to stop Mort from killing Jake. Jake of 1977 goes about his business with no idea he was supposed to die on that New York street corner.

Roland searches Mort’s mind and finds that it is he who pushed the brick from the abandoned building that struck young Odetta Holmes, fracturing her skull and her mind. He also learns that, coincidently, 20 years later, it is he who pushes her off the subway platform.

Roland acts to end Jack Mort’s life and return to his world. The death of Jack Mort allows Odetta/Detta who is about to kill Eddie, to become one whole person who takes a new name of Susannah.

The book ends as they prepare to resume their journey with their ka-tet half complete.

This second book of the series really expanded upon the budding plot and character in the first book. We don’t get any more of Roland’s backstory, but we come to know Roland better through his thoughts and deeds. Roland is not especially gifted with insight, nor his he particularly introspective. He is decisive and thinks well on his feet.

The book delivers two new interesting and well developed characters. Eddie is a flawed hero and despite his best efforts, those flaws often show. But Roland senses something noble in his character. Eddie frequently gives voice to his worst thoughts, but acts with best intentions. Eddie’s backstory demonstrates how he set himself on a path of self destruction because of the love of his brother.

Susannah’s development is yet to come. She is Detta through most of the book, but we get a large dose of Odetta’s backstory and how she co-existed with the demon-like Detta in her head.

The Gunslinger was written early in King’s career when he had not yet developed his full potential as a writer. When The Drawing of the Three was written, King was on top of his game and this book, standing alone, ranks as one of his best works.

King is parsing his story carefully. The first book served to define the quest. The second book was dedicated to introducing and developing new characters to accompany Roland on his quest. But his ka-tet is not complete. It is still short by two, and those two will join Roland, Eddie, and Susannah in book three of the series, The Wastelands which is the first step on the journey toward the Dark Tower.
Posted by Brian Schwartz at 5:33 PM

Labels: Dark Tower, Stephen King, The Drawing of the Three