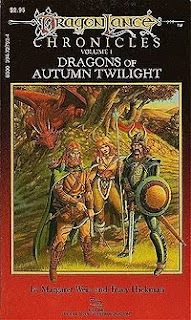 These three books, published by the same publishers that published Dungeons and Dragons, spurred a publishing boon for TSR. 190 Dragonlance books would be authored by more than a dozen writers.

The epic quest for the Dragonlance begins with the meeting of five friends at the Inn of the Last Home in the village of Solace in the world of Krynn. Each has been on a five year quest to find evidence that the true gods, forsaken by the people who found them too demanding, had returned to the world hundreds of years after the cataclysm.

The novel is populated with thin, but entertaining characters. Tanis is a half-elf who can find comfort with neither humans nor elves. Twin brothers Caramon and Raistlin are as different as two people could be. Caramon is a muscle bound fighter. Raistlin is a frail but powerful magician. Flint Fireforge is a surly dwarf fighter who is the unlikely best friend to Tanis. Then there is Tasslehoff Burrfoot, a Kender which resemble hobbits to a degree. Small in stature and merry in nature, they are natural born thieves who steal without malice.

They return to find their former home uneasy. Rumors of invasion and war are rampant. Tales of strange lizardmen roaming the countryside are told by fireside. They are forced to flee when soldiers come looking for these “stangers.” They flee with a human couple, a man and a woman who carry with them a strange staff with the mystical powers of the old gods.

They are pursued by Draconians, dragonlike men who are the footsoldiers for the invading army. They learn that they must travel to an ancient city, destroyed in the Cataclysm, to return the staff to where the plainsman Riverwind found it while on a quest to win the hand of his beloved.Goldmoon.

They find out that the staff they carry is an instrument of the ancient old gods and that they, both good and evil, have returned to Krynn to battle for it. They also find that dragons, thought to be creatures of myth and children’s stories, have returned.

The first installment of the tale ends with the defeat of the Draconian Highlord – an evil priest who commands dragons and draconians – and his red dragon mount. The true gods have returned to Krynn and the companions are to be footsoldiers in a war between the good gods and the evil gods.

This is because the books sprang from a game setting and set of modules (adventure games) developed in 1982 by Hickman and Weiss. Hickman was one of TSR’s most prolific developers of games and wrote some of the best known titles in Dungeons and Dragons history including Ravenloft which was ranked second of all time behind Queen of the Demonweb Pits.

As fantasy literature goes, this story has the intellectual nutritional value of a gummy bear. The tale is simple and simply told. There are simple backstories for the characters. Their motivations are singular.

However, the story is epic in its scope if not in its telling. While one would not want to make gummy bears the staple of one’s diet, sometimes its fun to eat a handful of them. Just as, sometimes, its fun to visit a simple tale and just revel in the joy of the story. Dragonlance is fun and I’ve enjoyed this trilogy several times since I bought it upon its publication in 1984. Occasionally, light reading is good reading.
Posted by Brian Schwartz at 5:46 PM