Dragons of Spring Dawning By Margaret Weiss and Tracy Hickman 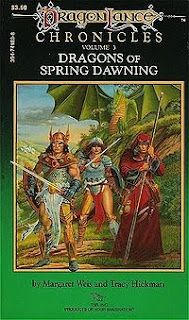 Book three of the Dragonlance Chronicles finds the party of heroes spread out across the continent of Ansalon in the world of Krynn. Tanis is in Flotsam, in the company of his old flame Kitiara, half sister to the twins and currently serving as the Dragon Highlord in this region. Also in Flotsam are Caramon, Raistlin, Tika, Goldmoon and Riverwind who are waiting to book passage on a ship.

Flint, Tasslehoff, and Laurana are in Palanthas, which is the seat of government during the war. There, Laurana is feted for her bravery in battle, having rallied the fragmented Knights of Solomnia in the defense of Palanthas. She is appointed commander of the Knights and is given the sobriquet “Golden General.”

Tanis waits for Kitiara to leave for her ill-fated attack upon Palanthas where Sturm Brightblade will fall, and slips away to find Cameron and the others so he can get out of the city. They set sail on a ship upon the Blood Sea of Istar. At the helm of that ship is the object of Kitiara’s desire for power, the mysterious Everman, or Green Gemstone Man – a man of deep sadness and a green gem embedded in his chest who goes by the name of Berem.

Through her spies that followed Tanis, Kitiara learns the Everman is aboard the ship. She and her dragon, Skie, attack the ship. In his panic to flee the attacking dragon highlord, Berem sails the ship into the Maelstrom, a whirlpool in the center of the treacherous sea. As the ship goes down, Raistlin uses the Dragon Orb to teleport off the disintegrating ship, abandoning his brother and his friends. Raistlin has his own interests to pursue.

Tanis and his friends awaken in the underwater city of Istar – Once the capital city of Ansalon, now ruined and the domain of the sea elves. The sea elves are reluctant to allow the heroes to return to the surface until they hear of the arrival of the dragons. Feeling their need to contribute to the fate of the world, the sea elves take Tanis and the gang to the surface and deposit them in Palanthas where they soon find Tasslehoff who brings them up to speed.

Meanwhile, Raistlin, weakened from having used the Dragon Orb, finds the Great Library of Palanthas where the chronicler of history since the dawn of time, the librarian Astinus sits daily, writing down events as they transpire in the world. Raistlin, nears death, requests access to the great library, where the greatest and most powerful spells ever devised by magic users, are recorded.

Raistlin finds that he can not access the spell books without the key which is long lost lore. Frustrated and dying, Raistlin strikes a deal with some dark power, saying, “Save me and save yourself!” Raistlin now wears the black robes of an evil mage.

Galthanas and Sylvara arrive in Palanthas with the good dragons. With a fleet of dragons and the powerful dragonlances at their disposal, the Knights of Solomnia with the elven princess, Laurana at their command, set out to liberate the entire kingdom of Solomnia. Flint and Tasslehoff join the battle, mounted on a dragon and capture Kitiara’s second in command; a man named Barakas.

Kitiara, lusting revenge on Tanis for his betrayal, conceives a plan to trade Tanis, who she tells Laurana in a letter, has been gravely wounded, for Barakis. She plans to capture the Golden General, destroy the morale of the troops in Solomnia, and sweep in with a superior force.

Laurana agrees to the swap. She, Flint, and Tasslehoff sneak Barakis out of the city and are betrayed by Kitiara who takes all three prisoner. She and Barakis take the three back to Dargaard Keep where the forces of the Dark Queen are garrisoned. Barakis is determined to have his way with Laurana, but the kender makes quick work of him with a small pocket knife, saving Laurana the indignity. Just as they are about to escape, they are captured by the undead Knight of Solamnia, Lord Soth. Soth is Kitiara’s powerful servant and a thoroughly evil creature. Flint and Tasslehoff are set free, but Laurana is taken to the city of Nereka where the Dark Queen herself will preside over a meeting of the dragon highlords. Kitiara flies to Palanthas where she tells the assembled masses, including Tanis, Flint, Tasslehoff, Caramon, Riverwind and Goldmoon that the Everman is to be delivered to her within three weeks or she will kill Laurana. Her plan is to lure Tanis to the city where she can have revenge upon him.

Tanis prepares to lead Flint, Tasslehoff, Caramon, Tika, and Berem out of the city to rescue Laurana. Goldmoon and Riverwind, who are expecting a child, are left to start the rebirth of the old gods in the new world in Palanthas.

Along the way, Berem reveals his sad tale. Born before the Cataclysm, he tried to steal a jewel from an ancient, evil temple and in the process kills his beloved sister. It was the removal of that gem that embedded itself in Berem’s chest, that allowed the Dark Queen to reenter the world. The man has existed for hundreds of years, dying repeatedly, only to be reborn as a man with a green gem in his chest. Berem and the gem he carries must be returned to that temple to seal the door before the Dark Queen is powerful enough to enter the world in her corporal form and establish herself as master of the world.

As the heroes enter Nereka, the dragon highlords and their troops prepare to enter the city with great pomp and circumstance. They quickly draw suspicion from watchful guards and are taken prisoner. Spotting Kitiara entering the city, Tanis decides to divert attention from his companions and approaches her. Kitiara takes Tanis with her into the city as Cameron, Tasslehoff, and Berem are taken prisoner and placed in the dungeons.

While in the dungeons, Berem slips into insanity, hearing the voice of his dead sister beckoning him to the temple to join her. His mania and Cameron’s muscle helps the heroes effect an escape. Berem flees, following the voice of his sister. Caramon follows, hoping to catch up to the Everman and save him from certain death. Tasslehoff and Tika take off in the opposite direction, drawing troops away from Caramon and Berem. They come to a dead end sealed by a locked door.. As Tika wields her sword, fighting draconians, Tasslehoff fumbles his attempt to spring the poison needle trap and is pricked. The poison works its way through his body as Tika is struck down by Draconian swords.

A dark wizard stationed nearby suggests that Tanis attack Ariakas and seize the crown, promising him aid against the Emperor’s magic. Tanis makes his move and gains the crown. Insanity ensues as the highlords scramble, now held to Tanis’ command. Tanis tries to trade the crown to Kitiara for Laurana, but Laurana rejects the deal, believing Tanis to be evil and corrupt for having consorted with the likes of Kitiara. She escapes in the chaos.

Meanwhile, Caramon and Berem make their way toward the temple, but find their way blocked by Raistlin, now clad in the black robes of an evil sorcerer. Raistlin explains that the path he has chosen will lead him to great knowledge. First, he must allow Berem to replace the jewel and seal the Dark Queen in the Abyss. Berem flees into the temple and impales himself on the temple, returning the stone to is rightful place.

The Dark Queen is gone from the world and her minions are rioting. Tanis, Kitiara, Lord Soth, and Laurana are caught up in the rioting in the city. Tanis pursues Laurana and Kitiara pursues Tanis. Meanwhile, having seen Berem to his end, Caramon pleads with Raistlin to allow him to accompany him. Raistlin tells him he can’t, but promises to repay the debt he owes Caramon for taking care of him while he was weak and frail. They find Tasslehoff and Tika and Raistlin uses his magic to restore them. He sees them safely out of the city. He summons his dragon from the dragon orb and leaves his brother and his friends behind.

Tanis and Laurana are reunited as they flee through tunnels under the city. Kitiara catches them and offers Tanis one final opportunity to join her as she tries to take command of the Draconian armies, telling Tanis that Lord Soth is on his way to claim Laurana as his own. Tanis rejects the deal. Kitiara, knowing the heart of a woman, exacts her revenge on the pair by letting them go, telling Soth that her act of mercy will always exist in Tanis’ heart and Laurana’s mind. Tanis and Laurana escape the city and are reunited with Caramon, Tika, and Tasslehoff and the absent minded mage, Fizban who the heroes learn is really the god, Paladine in disguise.

In the end, the heroes go their separate ways. Tasslehoff returns to Kender to celebrate with his people who slew the Dragon Highlord, Fewmaster Toede. Caramon and Tika return to Solace to marry and start a family. Tanis and Laurana return to Kalaman to start their formal courtship.

Dragons of Spring Dawning is fast paced and moves the story to an exciting conclusion. Of the three, it is easily the strongest of the books and you can observe Weiss and Hickman maturing as writers through their first three books.

The primary weakness of the trilogy is too much is left out. As noted earlier, the fight to gain the Dragonlance should have been told in full. The adventure Gilthanis and Sylvara experienced in bringing the good dragons into the fold was dismissed as too long to tell. It could have been a great story in the trilogy. Top notch story tellers tell their tales in full. For all of the fun and excitement, the Dragonlance Chronicles is hurt by these omissions.

The problem may have been the introduction of too many characters. A strong story melds character backstories into subplots. In this trilogy, there were just two many important characters to develop as much as was needed. Too many subplots were introduced such as the doomed and short passion between Sturm and the Sylvanesti elf princess, the tragic tale of Sylvara and her sister and Gilthanas’ heartbreak upon learning the true nature of the wilder elf with whom he fell in love. Also, it seemed in the beginning that Riverwind and Goldmoon would have major roles to play, she being the bearer of the talismans of the old gods returning again. But they are minor players in the second and third books. Fewer characters needing substantial development may have allowed Weiss and Hickman more room to fully tell their tale.

Raistlin and Tasslehoff are exceptionally entertaining characters. The physically weak, but mentally powerful Raistlin is always scheming beyond winning a just war. Tasslehoff, like Tolkien’s hobbits, is a diminutive and unlikely hero who provides comic relief and humorous misadventures.

The groundwork is laid in the end of this trilogy for the trilogy that followed, Dragonlance Legends which tells the tale of Raistlin’s quest to become a god and Caramon’s efforts to save his brother with the help of Tasslehoff. It is no coincidence that these characters were selected for the next trilogy.

The Dragonlance Chronicles are not great literature and are not worthy of mention among great fantasy epics such as Lord of the Rings or Stephen R. Donaldson’s Chronicles of Thomas Covenant, the Unbeliever. But they are a fun, amusing diversion when one has a desire to get away from weighty tomes and enjoy some pure, fun adventure.
Posted by Brian Schwartz at 7:29 PM