The Lord of Misrule: The Autobiography of Christopher Lee 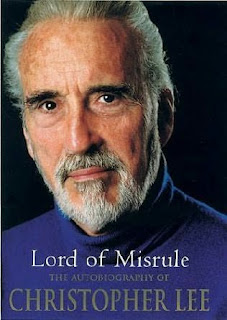 The Lord of Misrule: The Autobiography of Christoper Lee
Copyright 2005

As a child growing up in Southeastern Ohio, I spent my Friday nights with my friends watching "Double Chiller" with your host, Fritz the Night Owl, on WBNS, Channel 10 out of Columbus. Fritz was a great movie host and he got top flight movies. It was these Friday nights that introduced me to Hammer Studios, Hammer films, and Hammer's most prolific performer, Christopher Lee. For me, Lee, Peter Cushing, and Vincent Price were the Unholy Trinity of horror.

To a younger generation, Lee is best known as Saruman of Lord of the Rings and Count Dooku of Star Wars. To Generation X, he is Dracula and a host of other evil characters.

Lee's autobiography has a lyrical quality to it, as if he dictated it into a tape recorder. This would not work for most authors, but Lee's extensive vocabulary and great story telling makes it a worthwhile read for fans of Hammer horror.

Lee was born in London to a career soldier and a mother descended from Italian nobility. His father left him at a young age and his mother soon remarried. Lee recounts in great detail (perhaps too great detail) his education in private schools and the brutality of the British education system.

He would go on to serve in the British Army during World War II as Army Intelligence and learned to speak many languages in the process. He recounts many interesting stories of his war experience, but never makes himself the hero. He served in North Africa and Italy and saw frequent combat.

What is missing in Lee's account of his life is how he broke into show business. He simply moves on to working in his first movie. He talked about how he had trouble getting parts because of his height (6'4") and his deep voice.

Lee made dozens of films for the British Hammer studios and played Count Dracula in a series of Dracula films Hammer made in the late 1950s and 1960s. He was also famous for playing Fu Manchu in a series of films. His costar was often Peter Cushing who is best known for playing Governor Tarkin in Star Wars. Peter Cushing was his best friend and, for Hammer fanatics such as myself, it would have been great to learn more about Cushing and Lee's relationship with him. Lee states his affection and admiration for Cushing, but gives us little detail of their work together.

Lee was honored to play a Bond villain in The Man with the Golden Gun. He recounts a humorous story about appearing on The Tonight Show with Johnny Carson. Customs confiscated the movie prop, believing it could possibly be a weapon although, according to Lee, nobody could have mistaken it for anything but a prop. He was supposed to have the gun with him on the Carson set. He was embarrassed when he showed up empty handed.

We learn that Lee's favorite movie was The Wicker Man which he made in 1973. A poor remake was done in 2007. We also learn that he desperately wanted to play Gandalf in Lord of the Rings, but realized that Ian McKellen was better suited for the part. He relished his role in the movie version of his favorite books. It was great to find out that their are others who read those great books once a year, religiously. Lee did.

Lee is also a scratch golfer and relishes telling golfing stories as much as he enjoys telling tales of Hollywood and the British movie industry.

While his commentary on costars Cushing and Vincent Price is somewhat lacking, he is more detailed in describing his relationship with horror greats Boris Karloff and Bela Lugosi. His admiration for those pioneers of movie horror is well stated.

Lee tells his life story in anecdotes which seems to be a European style of story telling. His references to European history are often obscure and requires Wikipedia to get the context. The book is obviously a book written by a European for a European audience. Nonetheless, true fans of horror will enjoy the anecdotes and insights of this film legend.
Posted by Brian Schwartz at 3:19 PM