A Treasury of Great Science Fiction Volume I 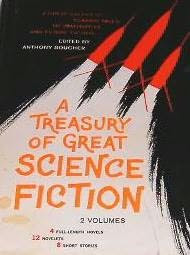 David, the son of THE local minister in a society where any physical deviation from the normal makeup of the human body, encounters a little girl with six toes. They try in vain to hide the secret, but are unsuccessful and the girl and her family are forced to flee. David, meanwhile, shares a small mental abnormality -- telepathic ability -- with several other local youths who all work hard to conceal it. When David’s new sister is born, they soon find their own abilities pale in comparison to hers. They fear their secret will get out.

This book is dripping with social commentary on religion versus intellectual progress and the role of religion in our society. The characters lack the alienation of a Kafka hero, but it is not hard to sympathize with them as their culture tells them they are abominations before God. While the bit about collectivism at the end smacks a little of socialistic superiority, the story blends just the right amount of social analysis with action to make a truly engaging story.

The Shape of Things That Came
by Richard Deming
A scientist’s nephew finds his time traveling T-shirt and uses it to travel from the year 1900 to 1950. Upon his return, he writes a short story about the experience that his editor simply finds implausible. The man explains what he saw.

Pillar of Fire
by Ray Bradbury
This was the antithesis of Richard Matheson's I Am Legend. In this story, the vampire struggles against the humans who dominate society. The last existing corpse comes to life in the 25th century to fight for its existence and to exterminate humans. In a perfectly ordered society, nobody suspects any abnormalities despite the chaos around them

Bradbury gives hints at what would come in Fahrenheit 451, which he wrote later. Our vampire compares himself favorably to the anti-heroes of the works of Edgar Allan Poe and H.P. Lovecraft in a society that has burned such disorderly books.

Waldo
by Robert Heinlein
The world’s greatest scientist is presented with an engineering problem that could threaten civilization. He is forced to appeal to a much older and arcane form of problem solving to develop the solution.

This was science fiction for engineers. WAY too much technology and not nearly enough story. I struggled to finish it.

The Father Thing
by Phillip K. Dick
Aliens have eaten Charles Watsons’ father. He must flee from the awful thing that has taken its place and take revenge on its evil master.

This story contains that theme of impostors and conspirators that was so common in the Golden Age Science Fiction of the 1950s. This is comparable to Invasion of the Body Snatchers which was also published in 1954.

The Children’s Hour
by Henry Kuttner and C.L. Moore
A man goes to a psychologist to be hypnotized so he can recall what happened to missing hours and days in his life. He recalls a young, beautiful girl to whom he was engaged. But fate -- or the intervention of some higher power -- always seems to get in the way.

This was a somewhat intriguing story that built the tension nicely, then veers off in a really odd direction that can't really be called a twist. Melds contemporary psycho-drama with mythology, and in the end, plain old fashioned sci-fi.

An ok, if non-descript story

The Widget, the Wadget, and Boff
by Theodore Sturgeon
Aliens conduct sociological and scientific experiments on a group of boarding house residents to ascertain whether or not the human race has the necessary mental capacity and ability to survive. As they engage their science from a higher plane of existence, they behave like a typical human married couple.

I don’t normally like character studies like this, but Sturgeon’s characters were meaningful and engaging. The story’s sci-fi tie-in is really tertiary to how human beings of various backgrounds dwell in the same habitat and how they see each other and themselves within that habitat.

Sandra
by George P. Elliot
A first person narrative about a man who purchases a female slave who is obedient and dutiful (and willing to sleep with him). He falls in love with her and she becomes lazy, disobedient, and independent. So he puts her back into slavery and she reverts to her normal form.

I guess this story qualifies as some alternative reality story since the guy purchased his slave at an Oakland department store, but nothing else in the text indicates any hint of sci-fi or alternative reality. It was racy for its time, I’m sure, but today would be dismissed as highly misogynistic.

Beyond Space and Time
by Joel Townsley Rogers
A brilliant scientist teams with a brilliant engineer to design and build the first rocket-ship designed to leave the galaxy. When the engineer is launched, he learns more about what is going on on Earth and his personal life from billions of miles away than he ever did while on Earth.

A locked room whodunit in space. The Martian Crown Jewels are being transferred from Earth --- where they were being studied --- to the Mars moon Phobe where they will be unloaded and returned to Mars. They are stowed in a locked cabinet aboard an unmanned freighter. When that freighter arrives, the jewels are gone. Terrified diplomats turned to a skilled Martian detective to help them solve the unsolvable case.

The Weapon Shops of Isher
by A.E. Van Vogt

A group of dissidents operate transient weapons shops that move from town to town and village to village to sell specialized self-defense weapons to help repress the tyranny of an imperial government. A young man defies his father who finds the weapon shops offensive and strikes out on his own with the help of a young woman associated with the weapon shops.

This story was superb and embodied everything that is good about Golden Age science fiction. The characters are strong and the story plot driven. The pro-2nd amendment advocacy is not even thinly veiled, but allows the reader to identify with characters confronting the same issues 5000 years in the future that we confront today.

A website I found describes Van Vogt as the third pillar of Golden Age sci-fi along with Bradbury and Asimov. It also claims that this novella was actually a series of short stories published separately.
Posted by Brian Schwartz at 11:54 AM