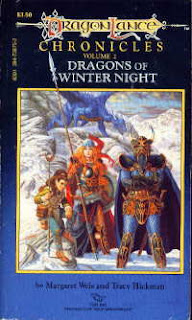 The tale of the heroes of Krynn and their search for the mythical Dragonlance picks up several weeks after they freed the human prisoners at Pax Tharkas. They are traveling to the port city of Tarsis where they find the Cataclysm has altered the geography of Krynn in such a way as to landlock the former port.

As they ponder their next move, Tarsis is attacked by the dragon army. As Tarsis burns, the companions are split into two groups as they flee the city. Their first night in the wilderness, they share a dream in which each member of the group participates. They dream of the Dragon Orb, hidden in the tower of a magic user from eons before. In the dream, they watch each other die at the hands of their enemies – and friends.

Tanis, Caramon, and Raistlin travel with the Sylvanesti elf princess, Alhanna, to her homeland to find the beautiful woods corrupted by evil. Raistlin learns that Alhanna’s father has a Dragon Orb and foolishly tried to use it. Instead, the orb dominated him and Sylvanesti has been warped into a manifestation of his nightmare. Raistlin is able to get control of the orb and defeat the green dragon who has captured the elven king’s mind and manipulated it into a nightmare.

While in Tarsis, the group meets a group of Knights of Solomnia, lead by the caustic Derek Crownguard. Sturm finds that the noble order to which he aspires has become rife with political intrigue and fighting. He also finds his heart captured by the elf maiden as he aids her in her escape from the burning city. They travel to the icy northern part of the continent and retrieve a dragon orb and the handle of the famed Dragonlance from the hand of an ancient dead night and his dragon steed encased in a glacier.

Eventually, Sturm runs far afoul of Derek Crownguard and Derek has him brought up on charges of treason. Only the belated testimony of Laurana and Flint as to his heroic deeds in the flight from Tarsis allows him to become a knight.

The Qualinesti elves have fled their homeland to the north to the land of Ergoth where they force the native elves into servitude. Their contempt for humans, their estrangement from their Sylvanesti cousins, and enslavement of their cousins makes it impossible for any union between the races of Krynn to fight the dragon invasion.

Tanis and his group travel toward the city of Flotsam where they hope to book passage on a ship. They form a traveling magic and talent show using Raistlin’s skills at sleight of hand as well as the talents of others to raise money. AS they journey across the winter countryside, Raistlin masters the Dragon Orb. Their tale leaves off as Tanis is separated from his friends and finds himself in the company of a long lost love.

New dragonlances are forged by Theros the ironsmith. Theros had his arm cut off as the dragon army invaded Solace. He has constructed a silver prosthetic arm which just happens to fulfill the prophecy that the dragonlance was forged by the man with the silver arm. Sturm and his group travel with Derek – now going mad with bitter jealousy and lust for power – and a contingent of knights to the High Clerists Tower where they clerics of Solomnia worshipped. The tower has not been entered since before the Cataclysm. However, Tasslehoff finds a way and leads them to a powerful weapon.

As the battlements of the tower are under siege from the dragon army, Derek desperately leads a full frontal assault on the vastly larger army. Sturm refuses to join him, seeing the attack as suicide. The battle ensues. Friends die and ancient powers deployed in the battle at the High Clerists Tower. At its end, an enemy leader pays homage to an old friend and honorable foe.

This second in the Dragonlance trilogy is my favorite of the books. The first book, while containing some action, was primarily focused on developing the theology surrounding the blue crystal staff and the Disks of Mishakal. This second book took the characters into battle with their enemies and with those who should be their allies.

It is also better written than the first. In my review of Dragons of Autumn Twilight, I remarked that they characters speak in the stilted language of Dungeons and Dragons players. Weiss and Hickman write much stronger dialogue in their second installment, making it a better story instead of a recounting of a Dungeons and Dragons game.

The nightmare sequence is fast paced and well written. They put it to good use, parsing parts of the nightmare into later chapters of the novel. The nightmare scene and the trip through the warped land of Sylvanesti is probably the best writing in the entire series.

This book took an ill advised shortcut that leaves the reader feeling cheated. An entire journey and great battle are given but a paragraph written in the past tense. This could have been fully fleshed out and added more excitement and action to the story. None of the great writers of fantasy would have taken such a short cut.

Like the first book, Volume 2 is light reading. There is little more character development. The political intrigue, such as it is, is far from complex. The action is straightforward and entire battles are fought in mere paragraphs. But the tale is an engaging one.
Posted by Brian Schwartz at 7:44 PM