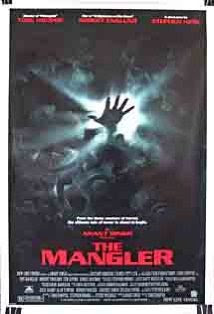 I said in my review of Graveyard Shift that it was the worst adaptation of a Stephen King work, but that I feared I would plumb new depths with this movie directed by Tobe Hooper who has a respectable horror film résumé. Thankfully, my fears were not realized.

That’s not to say I enjoyed it. I certainly did not. It suffered from many of the same weaknesses as Graveyard Shift, I would give The Mangler one half star as opposed to zero stars for Graveyard Shift.

The essence of the short story and the movie are the same. A small town police officer investigates the deaths of some workers at an industrial laundry. Each was crushed to death in a sheet press. A college professor determines that the blood of a virgin spilled upon the machine brings its evil to life. The short story does not end happily as the cop hears the press struggling to escape the confines of the factory and move into the world. The movie ends with typical Hollywood finality – with just enough room for a ridiculous sequel.

The film progresses much as the short story. Two guys carrying an old refrigerator bump into a young lady working at the press. She cuts her hand badly and her blood falls into the works of the press, priming the pump for evil. It’s not long before the evil industrial ironing board reaches out and snatches a sweet, old lady and folds her into something that would fit on a linen closet shelf.

The corrupt small town judge and sheriff show up at the laundry and declare it all to be just an unfortunate accident and that the press is safe. The town constable is not so sure because his college professor buddy is certain the machine is cursed.

More workers die or are injured. The factory owner peers down from his loft office and scowls and cheers as it happens. Inside his office is his ward and niece whom he has taken to molesting and raping. She is terrified of him and the machine because she knows its nature.

The Kelvinator that caused the accident becomes possessed by evil as well and swallows a small kid, having arrived in suburbia from the scrap yard. This works in the book because reading horror fiction and enjoying it requires the acceptance of certain absurdities. Our imagination generates images from the text that work for us. When we see them on film, our eyes can’t accept the absurdity. The scene looked foolish with the refrigerator trying to walk toward the constable and the constable knocking its “head” off with a sledgehammer.

In the end, with the assistance of the niece, the cop and the professor are able to enter the laundry, kill the evil owner with his own device, then perform the exorcism.

The twist at the end is another redeeming bit of writing in an otherwise terribly adapted movie. I did not see it coming. Of course, the twist opened the door for sequels. I will not suffer those. The Mangler 2 was made in 2001 and, from what I can tell from various plot summaries, involves the installation of a terrible computer virus on a high school computer system. The Mangler Reborn was a straight to video title in 2005 that has a man resurrecting the evil machine. According to an IMDB review, it is the best of the three Mangler movies. I’ll pass. . .

Tobe Hooper should not have touched this project. Stephen King’s Night Shift has three “machines come to life” stories. All three were made into movies and all three were ridiculously bad. The Mangler rises above Graveyard Shift only because Tobe Hooper does a marginally better job with his characters (except for the factory owner and the strange mortician who pops up at every death with no real role or purpose) and he does a marginally better job of padding the story.
Posted by Brian Schwartz at 10:42 PM