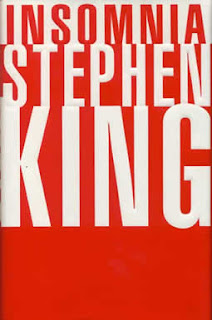 In the early 1990s, Stephen King embarked on a journey that saw his books infused with a strong feminist theme. Starting with Gerald’s Game in 1992, King would write a series of books where the primary focus was the damsel in distress. The tormentor is always a husband. In the books, women are noble creatures. Men are devils.

Insomnia takes us back to the town of Derry where It took place. We find that many of our old friends from It are still in Derry. Mike Hanlon is still the town librarian and Ben Hanscomb designed the city’s new civic center – built after the flood of 1986 wiped out half the town.

We know of Derry that one of the Guardians of the Beam resides deep under the city. The Turtle, who vomited up our universe whilst ill with a stomach ailment, guard one of the doorways that stand at the end of every beam.

We know that Derry is a thin place – or “thinny” between worlds. The aforementioned creature from It was certainly a Dark Tower minion able to make his way into our world.

Old people in Derry are having a tough time sleeping. Ralph Roberts, a 72 year old widower grows distressed as he awakens earlier and earlier each morning, unable to get back to sleep. The lost sleep over weeks takes its toll on Roberts and he begins to hallucinate.

He starts seeing auras much like a spiritualist. The auras reveal the nature of the person and in some cases, their imminent deaths. He also notes that each person he sees has an umbilicus leading from our heads upward. Some people have longer cords than others. Seeing all this, Ralph is sure he is going insane. Still, the sensation is not unpleasant.

One night, while passing a sleepless night at his front window, Ralph observes what he believes to be two little people – twins – exiting the home of the sickly widow across the street. The two men are small and have faces that include all of the requisite features, yet are featureless. One carries with him a pair of large, stainless steel scissors. He places an anonymous 911 call and authorities arrive at the house to find a woman who died a natural death. Ralph does not report what he sees, but he is determined to find out who these two men were.

Meanwhile, the town of Derry is up in arms about the anticipated rally to be held by noted feminist, Susan Day. The central issue is abortion and Derry’s women’s health center. The pro-choicers are determined that the rally will happen while a fringe anti-abortion group is willing to take whatever measures necessary to prevent Day from speaking.

Ralph soon sees another of the “little bald doctors” as he calls them. This one is different from the first two. They were clean and mannerly as they left the house. They seem to share a camaraderie and mutual respect for each other and themselves. They were also clean and neat. The little bald doctor Ralph observes one night tormenting the local stray dog, wears a cruddy apron and wields a rusty scalpel. He is frightened of doctor #3.

Ralph soon learns that a friend of his, a widow who lives on the same street, also suffers from insomnia and has had similar experiences with auras. Together, they are able to find the two good doctors who they learn inflicted insomnia upon them so that they could see each other and communicate.

It is here that we come to learn a great deal about the Dark Tower and it makes this novel worth reading. Ralph names the doctors Clotho and Lachesis. Clotho and Lachesis explain that they are inhabitants of the lower levels of the Dark Tower and are yeoman servants of what is known as “The Purpose.” There job is to see that timely deaths are seen to by a cutting of that ethereal cord above the head of people. It is a job they do with tenderness and love.

The third doctor, they explain, is an agent of “The Random.” He metes out death without purpose. The kid that gets hit by the car – or tanker truck like Gage Creed in Pet Sematary are victims of The Random and Atropos as Ralph names him. While he is unseemly, they explain, he is an agent of the Dark Tower and necessary to the cosmos.

However, Atropos and his master the Crimson King, have a plan in mind that fits in with neither The Purpose nor The Random. Each person, with rare exceptions, will live and die by the Purpose or the Random. One of the few who is not is an insane man bent on stopping the rally. He serves neither and the Crimson King has co-opted Ed Deepneau to create chaos, mayhem, and murder in Derry while targeting one young boy in particular who threatens the plans of the master of the Dark Tower. Ralph and Lois must use the powers they acquire through their insomnia to thwart Ed Deepneau and the Crimson King, imprisoned or holding domain over a Dark Tower in another world.

Deepneau’s pro-life followers attack a battered women’s shelter outside of town, setting it afire and killing its staff. The residents and their children huddle in the basement as the building burns and the police lay siege, trying to force the armed protesters out or kill them. Lois and Ralph are able to “beam” into the basement and lead the women and children to safety.

When they arrive in the basement, they are not yet visible to the people trapped there, being “up levels” within the realm of existence. Except one child – a small boy – sees them and tells his mom there are angels in the room. It is this child, Patrick Danville, that Ralph and Lois must save at all costs. Patrick Danville will save the lives of two very important people, Lachesis tells them and he must be alive to do it or all the worlds and the universes in the cosmos will be laid to waste.

When the confrontation at the shelter is over, Ralph and Lois are alarmed to find that Deepneau is not among the dead. They learn that Deepneau has acquired a plane and plans to crash it into the civic center while Susan Day is speaking. All of the women who have just survived the attack by the pro-life forces – including Patrick Danville’s mother – are determined to attend that rally and hear Susan Day speak.

Ralph is able to get aboard the plane and while many die despite Ralph’s best effort, Patrick Danville and his mother survive along with hundreds of others who would have died had Ralph not thwarted Deepneau.

The story ends with Ralph and Lois married. They live together in marital bliss for several years. Then Ralph realizes the time has come for him to make good on a bargain he struck with Clotho and Lacheis. He rushes out into the street to save one final life.

It took King almost 800 pages to tell this tale. The action seems to get going right away when, early in the story, Ralph confronts Ed Deepneau at a traffic accident. Ed insists the truck he hit is carrying the bodies of dead babies. Ed had been his friend and Ralph is struck by Ed’s seeming instantaneous insanity. It’s a well written scene and King grabs the reader’s attention with it.

Then, he loses it with endless introspection, over explaining, and over development of characters. Event after event unfolds, told in great narrative detail, with many words. Yet, each event reveals so little information. It becomes tedious reading. There isn’t any real action until the end and by that time, the reader just wants the book to be over if he hasn’t already put it down.

Then other parts of it are just foolish. Ralph discovers he has a karate chop that delivers and energy blast that hurts Atropos. Lois can shoot little bolts of energy from her finger like a pistol. In a story that seems to revel in the deep nature of human existence within the cosmos dominated by a mysterious Dark Tower, this is b-grade science fiction.

The political overtones also weaken the book. King’s narrative does not declare a side in the endless debate over abortion. But, the feminist nature of the story with evil men harming innocent women against the backdrop of an abortion battle is not a good setting – it’s a distraction. King did a much better job of creating the same type of mass hysteria in Needful Things without being so damned ideological.

King had whetted the appetite of Dark Tower fans two years earlier with The Wastelands and despite how awful this book was, it was still a bone thrown to Dark Tower fans. We get our first real look at the Dark Tower, standing tall, with many spires, in a field of brilliantly red roses.

This is where we first meet inhabitants of the Dark Tower who describe its nature. There are many levels within the tower. It has many inhabitants, good and evil. But it is dominated by the evil Crimson King who will develop into Roland’s chief adversary.

King also sets up a new character in Patrick Danville, the kid with a fishhook shaped scar on his nose that will appear later in the Dark Tower series to save the lives of two important people at a most opportune time.

While it was in It that the town of Derry was established and developed quite well, we learn more about this fictional Maine city and it becomes fully incorporated into the Dark Tower world because, as we learn, even with It dead, there are still dangerous creatures who lurk beneath the city. Derry is a place the minions of the Dark Tower are very aware of and it has shown in the town’s history.

As a stand alone novel, I would recommend avoiding Insomnia. King has written worse books – but not many. It is entirely overlong. Its central characters are not interesting. It’s story is weakened by over telling. But for fans of the Dark Tower, it is essential reading. The information revealed in Insomnia is necessary for true appreciation of the story that is to unfold when King eventually returns to the story.

Next in the Dark Tower series is Wizards and Glass which is best described as an interlude where Roland’s life history unfolds. A review coming soon!
Posted by Brian Schwartz at 3:13 PM