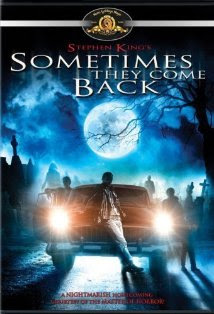 Book to Movie: Sometimes The Come Back
Made for television, 1991
Screenplay by Lawrence Konner
Directed by Tom McLoughlin

It would be more accurate to call this a retelling rather than an adaptation. While the plot of the movie follows the short story, many plot elements are reworked to make the story work for television.

In the short story, three of the hoods that accosted Jimmy and Wayne Norman in the underpass die in a car wreck six months after Wayne is murdered. In the movie, they die in that underpass. The car is hit by a train because little Jimmy Norman, in an act of terrified defiance, snatches their car keys so they are unable to get out of they way. Revenge on Jimmy for killing them is the motive rather than the ambiguous “unfinished business” of killing Jimmy that serves in the short story. I thought the movie’s plot enhancement worked.

The movie adds a son to the mix. Jimmy Norman, his wife and son settle in the New England town and Jimmy takes up teaching. Just as in the short story, students die tragic deaths and are replaced by the ghosts that stalk Jimmy. However, Konner adds a twist in having Jimmy nearby when the deaths occur, casting suspicion on him.

Konner enhances the element of an evil car. Haunted machinery, particularly cars, appears in a great deal of King’s fiction. Christine is the most popular example. But there’s a sinister car in It, in Riding the Bullet, and in From a Buick 8, the car is a portal into a hellish dimension. Like Christine, this car is a late fifties model. All nameplates have been stripped from it, so I am unable to identify it. The ghosts take to chasing Jimmy, his family and his friends around in this black car.

In the short story, Jimmy summons a demon to assist him in defeating his ghosts. In the movie, the fourth bully who survived the crash tries to help Jimmy, but ends up getting killed. When he dies, Wayne enters and the drama replays itself with the ghosts getting their just desserts.

Konner’s screenplay is a superb retelling. The padding of the story works in subplots and new characters. However, the movie was not well cast. This was perhaps the weakest performance I’ve ever seen from Tim Matheson. He phoned it in. The rest of the cast is undistinguished and uninspired.
Posted by Brian Schwartz at 4:00 PM