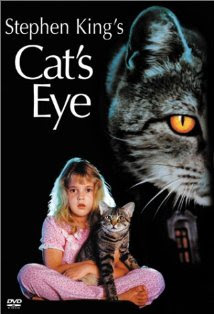 Two stories from King’s first collection of short stories, Night Shift are adapted in this anthology. The first is Quitters, Inc. The second is The Ledge. The movie wraps up with an original screen vignette.

The movie is set against the backdrop of the travels of a stray cat. In the movie’s opening credits, the cat is chased by Cujo, nearly run over by Christine, before he ends up in a moving van that takes him into the city. There, he hears the voice of a young girl (Drew Barrymore) beckoning him to help save her from the monster that inhabits her bedroom.

As they cat sees the image of the young girl in a television in a show room window, he is snatched up and placed in a cage. He is delivered to the offices of Quitters, Inc.

James Woods and his buddy pull up out front and Woods’ buddy drops him off to begin his trek toward being tobacco free. The story closely follows the short story from this point. The cat is used as the object in the torture demonstration.

Woods character has a tougher time with the quitting on screen than in the book. At one point, at a party, he begins to hallucinate. Just as in the story, he backslides and his wife is brought in for torture. A skirmish ensues and as Woods battles to stop his wife’s torture, the cat escapes the lab. Woods surrenders as the torture ends.

The final sequence ends with the same exclamation point as the story.

The cat then makes his way to a casino where two men, in a gambling haze, wager as to whether or not the cat can make it across the road. The coax the cat who successfully crosses the street, but not before causing a traffic accident. The cat is then scooped up by one of the high rollers and taken to the penthouse suite of the man with the ledge.

The vignette of The Ledge is essentially the same story as in the book. The tennis pro (played by Robert Hays of Airplane!) is forced to traverse the ledge around the building to win the gambler’s wife and $20,000. The plot twist is a bit more graphic than in the story, but the end is the same. The pro overpowers the bodyguard and forces the gambler out onto the ledge, where he is forced to walk. . .

As the men battle for control of the gun in the penthouse apartment, the cat escapes and makes it to suburbia. There, a young girl is being stalked by a spear-wielding troll who wants to suck the breath – and the life – out of young Drew Barrymore. This is very much in the keeping with the old wives’ tale of how a cat will suck the breath out of a baby.

Barrymore’s parents let her keep the cat, but he doesn’t get to sleep inside. Nonetheless, when the troll launches his first attack on Barrymore, the cat gets in a window and is able to ward off the troll. On his way out, the troll kills the girl’s pet parakeet for which the cat receives the blame. Despite being cast out of the house by the parents, he is there to fight the final battle with the troll to save Drew Barrymore.

The movie ends with the cat peacefully passing the days in suburbia.

This was one of King’s early efforts at a screenplay and he did a splendid job of adapting his stories to the big screen. The took on the quality of a comic book horror story much as his stories in Creepshow.

King clearly understands how to write for the visual medium. Like with his books, sometimes the stories leave a lot to be desired. Witness Sleepwalkers and Maximum Overdrive. More often than not, he hits the mark as he did here.
Posted by Brian Schwartz at 5:49 PM