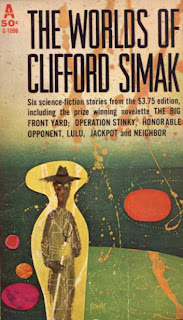 Dusty Zebra
Ever wonder what happens to your minor possessions that seem to mysteriously disappear never to be seen again? One man finds out that there exists another dimension where an alien race likes to acquire objects from our dimension, and they are always willing to trade. The man discovers a place on his desk that serves as a vortex into this other dimension of bartering aliens. He sends through various trinkets and office supplies and receives various, usually unidentifiable devices. But finally, he receives the one item no housewife will want to be without and makes millions by trading for hundreds of thousands of them. Newton’s Second Law takes effect because there has to be an equal and opposite reaction – even between dimensions.

This was a light, fun story. For its simplicity, it was overlong.

Honorable Opponent
An uneasy spaceship captain cools his heels on a barren planet, waiting to make a prisoner exchange. His side lost the war and lost it badly because their implacable enemy could make their ships disappear at will. When the enemy captain arrives to exchange the prisoners, the captain learns that alien races have alien perspectives on the reasons to wage war.

Simak, in the telling of this story, demonstrates that it must be accepted in science fiction writing that an alien culture would have values and ideas far different than our own. It’s a common theme in Golden Age science fiction done so well by Ray Bradbury, Isaac Asimov, and Theodore Sturgeon.

Carbon Copy
A small time real estate agent lands the deal of a lifetime when a developer offers him a 90 percent commission on leasing houses inside a new, self contained development complete with shopping centers and banks. The deal gets sweeter when the agent finds out that no matter how many families he leases homes to, there are always plenty of vacancies. The development always appears to be empty even though tenants regularly call him and visit him. He investigates to find out where these people went.

This is an original take on multi-dimension. Multi-dimension is as common in science fiction as rockets and flying saucers and remains a popular device today. Witness the television series, Lost. It’s easy to do it badly and having been done so many times, it’s difficult to find a new twist on it. Simak does.

Founding Father
A group of immortal humans flies through space for 100 years, enjoying each other’s company and passing the time in leisure and comfort. When they arrive at their destination planet, one man finds out he was alone on the ship. His fellow travelers were false beings conjured up by the Dimensino. His job is to see to his cargo – 1000 human embryos to be nurtured in incubators to start a new colony of man. But the Dimensino has an allure that he must defeat if he is to carry out his mission.

Simak’s prose are so crisp and spare in this story. It moves quickly and does not wander off into needless explanation. The Dimensino is. That’s all we know about it. That ambiguity makes it an enjoyable page turner.

Idiot’s Crusade
A young man with limited intelligence inexplicably finds himself endowed with powers that make him nearly omnipotent. He can change people’s actions, emotions, and motives with just mere thoughts. He can also make the do things. After “improving” the people of his village, he looks to expand his horizons.

The Big Front Yard
A fix-it man and antique dealer gets a heck of a surprise when some old, derelict computers are delivered to his home for him to look at. While his back door leads directly to his back yard, his front door opens into another world. The people who inhabit the world at his back door take notice immediately and his home becomes the center of worldwide attention. Meanwhile all the antique dealer wants to do is find his dog that has gone wandering off into that other world.

This was just a bit overlong to me. The story was traditional sci-fi that deals in dimensional doors. Simak does write the parts of animals well as he demonstrates here and in the story that follows.

Operation Stinky
An old man lives near an Air Force base in a shack. Under that shack are several skunks that the man has learned to co-exist with. One day, his dogs corner a skunk that seems to be special. He is friendly, purrs like a cat, and clings to the man like a pet. When that skunk makes modifications to the old man’s jalopy that give it some impressive abilities, the Air Force takes notice.

Thankfully, Simak did not engage in overtelling this story because it would have been easy to do with so much in play. He gives us enough action with the car to create the conflict. He develops the relationship between the man and his skunk just enough to know they share a bond, and the military people are not caricatures as they always seem to be in Golden Age sci-fi.

Jackpot
On a remote, arid plant, a salvage vessel crew finds the ultimate library containing answers to the mysteries of the cosmos. The crew is confident they are going to cash in on all of these great secrets. But the crew’s doctor has serious reservations about the morality of peddling in knowledge and throws a wrench into the works.

Death Scene
As decades of war pummel the planet, men are suddenly given the ability to see 24 hours into the future. It gives each man the power to foresee the actions of others. War is rendered obsolete and there is peace in the world. But the ability forces other pastimes into obsolescence as well – activities such as sports, gambling, reading, etc. It’s against this backdrop that a man foresees his own death to come the following day. His family sees also and, as is custom in this world of perfectly prescient beings, they prepare to gather for an evening of reminiscing before the next day dawns.

Simak accomplishes here that feat of telling a great deal of story with just a few words. Those are the short stories that are best and kudos to Simak for this clever tale of culture shock and its fundamental and unforeseen effects on the lives of people.

Green Thumb
A county agricultural agent discovers he has an alien, and intelligent plant living on his property. He is able to gain the trust and eventually friendship of the plant – although their ability to communicate is nearly nonexistent. The agent knows that the plant abhors our world where vegetation is grown and harvested for the purposes of building, healing, eating, and recreation.

In a genre where alien races can oddly speak English, Simak successfully reminds us that any alien contact is probably going to be completely alien.

Lulu
A spaceship’s resident robot falls in love with every male member of the crew. When they reject her romantic overtures, she sets the ship down on a remote planet and shuts down. When she finds one of her own kind to fall in love with, her motives change. The men have to find a way to stay safe of her paramour and convince her to leave the planet.

Neighbor
A new neighbor takes over a run down farm in Coon Valley, Nebraska. His neighbors take note of how quickly he is able to make repairs to the home and the farm equipment. They notice that his farm implements need no manpower to make them run. They also notice that it always rains on his farm when he needs rain, despite what weather they may be having in the rest of the valley. The new neighbor is perfectly willing to share his abilities to benefit all, but a snooping reporter threatens to ruin it all.

This is the kind of science fiction that would influence later sci-fi screenwriters like Rod Serling. This nifty tale has Twilight Zone written all over it.
Posted by Brian Schwartz at 10:24 PM