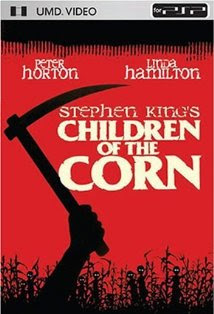 The movie Children of the Corn is a retelling of the Stephen King short story that appeared in his first collection of short stories, Night Shift. The essence of the story is the same. A young couple traveling to California (the reason in the movie is unstated) hit a kid in the middle of a lonely stretch of road in rural Nebraska. The take the kid to a small town called Gatlin where they find a murderous cult of kids.

What is immediately evident is this is a completely different pair of characters than those of the King story. In the King story, they were a bickering couple, driving across the country trying to save their marriage. In this version, they are young and in love. Burt – played by Peter Horton -- is a newly minted doctor and their future seems bright. His girlfriend, Vicky – played by Linda Hamilton – is pushing him for a commitment in the relationship.

This was a wise change in the story in bringing it to screen. Young lovers make for a much better set of heroes than do bickering couples. The bickering couple worked well in the short story because it was short. Abrasive bickering would have made the movie tiresome and the characters unsympathetic.

Unlike the short story, we are introduced to the children, and it is those characters that really carry the movie. New to the story are Job and his sister, Sarah who has the gift of sight and draws horrific pictures that predict ghastly events in the future. They are there to see Joseph off on his ill-fated trip through the cornfield to the highway to get help for the kids who are trapped by the evil child-preacher Isaac and his fanatically sadistic sidekick, Malachi.

Just as in the story, Joseph meets his end with a cut throat, under the wheels of Burt’s car. Burt and Vicky put Joseph’s body in the trunk of their car and go off in search of help.

They find a roadside garage whose owner is unfriendly and hostile. He tells them he has no phone and no gas. He warns them away from Gatlin, telling them that “folks there got religion,” and don’t like outsiders. He directs them toward Hemmingford (which King fans will recognize as the home of Mother Abigail from The Stand) which is 17 miles beyond Gatlin.

Burt and Vicky get lost and the signs seem to be guiding them toward Gatlin no matter how hard they try to avoid it. This scene is foolish. It is apparent the director was trying to build a high level of tension as Burt and Vicky feverishly drive down dirt field access roads, making random turns. The choppy shot sequence and shrill music are supposed to lend to this tension. It amounts to three minutes of wasted time.

After driving through miles of cornfield, they arrive in Gatlin and find the place deserted. They decide to take off exploring. After Vicky has a scary encounter with some of Malachi’s henchmen, they resolve to get gone from Gatlin. But on their way out of town, they see movement in one of the houses. They stop to investigate and find Jobe and Sarah.

Things get improbable here. After hearing an account of what transpired in Gatlin three years ago when the kids slaughtered all of the adults on behalf of He Who Lives Behind the Rows. Burt inexplicably decides he wants to visit town hall and leave his girlfriend behind, knowing murdering, rampaging children are on the loose. With Burt off exploring, Vicky becomes easy prey for Malachi who kidnaps her and takes her to the cornfield where she is placed on a cross made of corn to be sacrificed to the unholy agrarian demon.

Burt investigates the church stumbles into a religious ritual where Amos, having attained the age of 19, shares his blood with the youthful congregation before going off to join He Who Walks Behind the Rows. This could have been a great scene, except for one stupid line that is so stupid it deflates the tension. In the midst of this horror, Burt tells the kids he wants to discuss the possibility of infection from Amos’ cut with whomever is in charge. He proceeds to engage the priestess in a theological discussion while his girlfriend is being held prisoner in the cornfield. George Goldsmith really blew this scene.

Eventually, the tension that has been developing between Malachi and Isaac -- the religious leader of the colony and he who speaks for He Who Lives Behind the Rows -- over whether or not to sacrifice Vicky now or later erupts. Malachi takes control and sacrifices Isaac to the demon in the corn. But when He Who Walks Behind the Rows is done with Isaac, he sends him back to tell Malachi that he is also to be sacrificed.

With both their leaders gone and the terrifying demon in their midst, the kids flee the cornfield. Vicky escapes and finds Burt, Sarah, and Job. Job recounts the last attempt to thwart Isaac, undertaken by the chief of police, and Burt figures out how to slay the monster. Then we have a happy ending where the young couple commits and decides to take the young orphans with them.

This movie certainly had its weaknesses, as noted above. However, I still rank Children of the Corn as one of the better adaptations of King’s work. Goldsmith introduced new interesting characters to make for a visually exciting adaptation. Sarah and Job help move the story as juvenile religious dissidents. The characters of Isaac and Malachi are among the creepiest in any King film. Kudos to John Franklin who portrayed Isaac in his first acting gig, and Courtney Gains, also in his acting debut, who made Malachi one menacing son of a bitch. Gains’ portrayal steals the show.

The happy, sappy ending was horrible. King films should end badly as the original stories do. King does not usually end stories in a happy way. The same thing was done to Cujo as a movie. Burt and Vicky should have died or barely escaped with their lives at best.

I saw this movie for the first time in my parents’ basement family room when it came out on Betamax in 1985. At the edge of my parents’ back yard was 15-20 acres of corn. My friends and I played and played in that corn as children. . .
Posted by Brian Schwartz at 4:16 PM