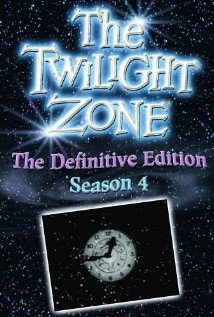 This was an interesting and engaging short story by Richard Matheson for season 4 of The Twilight Zone. The script deviates substantially from the story, but the script was written to work on television and Matheson makes story work well on the small screen.

The story tells the tale of three astronauts who are scouting for inhabitable planets that men can colonize to alleviate an overpopulation problem on earth. They find such a planet and spot a metal object on its surface. They go to investigate and find a crashed spaceship, just like their own. Aboard that spaceship are three bodies, just like their own. They have to discover the nature of this anomaly if they are going to escape.

In Matheson’s story, the captain is an authoritative, but sympathetic figure. On television, he is obsessive. He’s played to the abrasive hilt by Jack Klugman who is exceptional at playing abrasive people. It is this need for determining the how and why of the situation that drives the story as the captain becomes obsessed.

Meanwhile, his two crewmates just want to leave. They plead with the captain who insists on staying, making calculations to determine what that ship is and how it can have the three of them dead within its hull. Soon, his men start having visions of being home with people they’ve missed. The captain is there to interrupt their dreams and to assure them those dreams are not real.

Finally, the captain decides to lift off. They break free of the planet. But the captain insists on going back. Having established that they can take off safely, he is determined to return to the planet and prove to them that it was an illusion, assuring them that the ship will not be there when they return.

But there it is, just where they left it. The captain resolves to study the problem some more. His crewmen plead with him. We’re dead, they tell him. Just let us go, they plead. But the captain will not. Those crewmen’s souls are prisoner to their captain’s obsession.

Matheson’s tale dealt with the nature of space and time. His script is much more metaphysical and nearly crosses over into theological. The dream sequences (an addition to the story for television) are used well to heighten the despair we feel for this captain’s crew.

The DVD liner notes compare this to Ray Bradbury’s Mars is Heaven. But I think Matheson was going for something much deeper. In Bradbury’s tale, the crew were being deceived so the Martians could defend themselves. In Matheson's sequence, the men are hallucinating, but within some context of a physical afterlife rather than one artificially generated.

I’ve written of the symbiotic relationship between Rod Serling and Matheson and this is another prime example of it. Matheson is a gifted screenwriter as well as a writer of novels and short fiction. His scripts rank among the finest of the Twilight Zone. But Serling was as gifted in writing for television as any person whose ever written for that medium. When they worked together, no writer or combination of writers ever penned such compelling television drama, even if it was within the confines of science fiction.

Matheson and Serling were the McCartney and Lennon of television.
Posted by Brian Schwartz at 2:00 PM