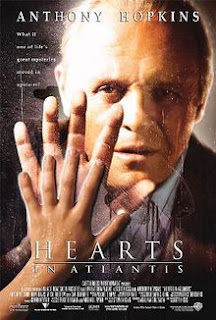 Book to Movie: Hearts in Atlantis (2001)
Screenplay by William Goldman
Based on the book by Stephen King
Directed by Scott Hicks

In 2001, Hearts in Atlantis was made into a movie. It enjoyed a massive marketing campaign and was highly anticipated, having cast the legendary Anthony Hopkins as Ted Brautigan. Sadly, the movie did not live up to its billing and did not do the book justice.

The movie takes in only the short novel, Low Men in Yellow Coats. The movie opens with Bobby Garfield leaving the funeral of his friend Sully John. He finds his old home abandoned and in disrepair. The neighborhood he remembered had deteriorated into a slum. Bobby is now a middle-aged writer, not a carpenter and reformed juvenile delinquent.

He wanders to the park where he and his friends played as children. He is carrying a package he plans to open. Before he does, he starts to reminisce about his childhood.

The movie loosely follows the book with a few, inconsequential variations that adapt the story to the big screen. However, the climax and the end are much different.

He goes on to collect Ted’s winnings and then home to confront his mom. He throws the money at her in anger, but quickly falls into sadness as he perceives the hurt and degradation his mother has endured at the hands of her boss.

Shortly thereafter, Bobby learns that he is moving and goes to Carol’s house. Carol leaves him with the same line she used in the book, “I have to make the salad.”

The flashback fades and middle-aged Bobby sits examining the package that arrived for him the day of Sully John’s funeral. Carol approaches him and he recognizes her from across the years. Just as in the book, she has changed her name and explains how she fell in with a bad man many years before and did some bad things. The movie comes to a close as Bobby opens the package and finds Sully John’s ball glove.

This movie falls short because it never quite develops any element of the story. Certainly Low Men in Yellow Coats could have been successfully adapted into a motion picture. All of the elements for a good, stand-alone story are there. The main fault of this movie is that it stuck too closely to the book.

The movie could have been a period piece, but 1950s culture is scarcely brought to the fore. Incorporating elements of the other stories in Hearts in Atlantis, it could have been a great coming of age story a la The Body from Different Seasons. With some clever rewriting, it could have been an interesting story about the mysteries of space and time with the visitors from other planes chasing Ted Brautigan. All of these ingredients were introduced, but none of them developed at all.

Had one not read the novel, and had some familiarity with the Dark Tower story, the Low Men in Yellow Coats are pointless and never explained. Carol’s journey through life, which makes their meeting in the park in the final scene of the book so poignant, is not here at all, rendering her character meaningless. The turmoil of the 1960s that took these three childhood chums in much different directions is completely absent.

What is there are elements of the book which worked well in the broader context of the Dark Tower saga and within the confines of the collection of stories that is Hearts in Atlantis. Including these elements without explanation makes for a confusing and unsatisfying movie, despite the usual stellar acting of Anthony Hopkins.

Some Stephen King fans will be repelled at this suggestion, but I think this book is ripe for a three part television mini-series. King writes a fantastic coming of age story that chronicles the era that defined his generation, stripped of the romance that pop culture attaches to it. There is enough emotion, story, and subplots in Hearts in Atlantis to fill many hours on the small screen and tell a wonderful story. This movie never gets there.
Posted by Brian Schwartz at 5:19 PM