The Age of Jackson by Arthur M. Schlesinger, Jr. 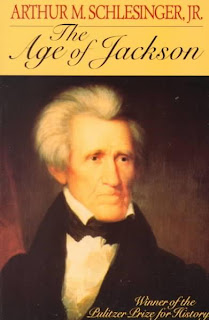 The Age of Jackson
by Arthur M. Schlesinger, Jr.
Copyright 1946

What is noteworthy about this book is the man whose name and portrait appear on the cover is not a central figure in the narrative. The Age of Jackson is not a biography of the president, but a narrative history of how Jeffersonian Democracy evolved into Jacksonian Democracy in the party realignment that emerged from the "Era of Good Feelings". It then goes on to describe how Jacksonian Democracy petered out during the Civil War and the Gilded Age that followed.

Many historians, including me, see it as a veiled justification for the programs of the New Deal.

Jeffersonian Democracy embraced the concept of an agrarian society with yeoman farmers tilling their own soil and making their own way. This ideal became less relevant as American manufacturers began to develop in New England and Americans increasingly moved from the field to the factory.

More important to the evolution of Jacksonian Democracy was the American banking system, designed and implemented by Alexander Hamilton. The Second Bank of the United States was the holder of federal deposits and lent money to state banks to centrally control the flow of currency in the expanding United States. In the minds of the newly emerging Democrats, this system of tight money favored the wealthy.

Schlesinger's analysis of the national bank and its operations is illuminating. The story is frequently taught in high school history, but its subtleties and nuances are quite complex.

Schlesinger's description of the battle between Jackson and bank president, Nicholas Biddle, really puts Jackson at the margins. Oddly, Martin Van Buren emerges as the hero of the bank battle. In fact, Schlesinger venerates Van Buren as a champion of classic democratic principles more than Jackson.

The depression that followed the shutdown of the Second Bank and the issue of the Specie Circular is given short shrift in the book, which is telling of Schlesinger's true motives in writing the book. That depression was the deepest and most painful in American history. Instead, he lauds Van Buren's efforts to meet the crisis which were small and futile. It's clear that Schlesinger is a huge fan of House Speaker and future president, James Polk.

Schlesinger is derisive of Whig candidate William Henry Harrison, accurately stating that his "Log Cabin and Hard Cider" campaign was largely a contrivance of politics. He describes the unfortunate and ineffective John Tyler as a Whig who tried to be a Democrat. The Tyler presidency and his alienation of both parties were a boon to Democrats who anointed James Polk as the heir to the Jackson legacy.

Polk is, of course, not known for his economic policies nearly as much as his foreign policy. Nonetheless, Polk's policy of "Manifest Destiny" and the vast territory he added to the United States created new rich in the country and expanded the popularity of the party.

The presidencies of Zachary Taylor and Millard Fillmore doomed the Whig Party. The issue was not economic, but slavery. The Democrats were fundamentally states rights and willing to allow the South to determine their own policies on slavery. The Whigs were decidedly undecided and that lack of policy principle doomed them. However, the re-emergence of Democrats in the White House sewed the seeds of the destruction of classical democracy.

Franklin Pierce, who was drunk through his entire presidency, alienated anti-slavery Democrats in the north and drove them to the newly formed Republican Party. Meanwhile, James Buchanan did his best Nero impression as the U.S. stood at the brink of Civil War. The upstart Republican Party seized the presidency in 1860 and didn't look back for several decades.

Civil War ended most infighting over economic policy in the United States. In fact, Abraham Lincoln chose loyal Tennessee Democrat Andrew Johnson as his 1864 running mate. The ascendancy of Johnson to the presidency would further damage the Democratic brand with the American electorate and Schlesinger is hard on him. There is no doubt that Johnson was intellectually over matched by the job and Republicans destroyed him and his presidency. It would be the last gasp of classic democratic principles until the emergence of Franklin Roosevelt. There were Democrats in between, but neither Grover Cleveland nor Woodrow Wilson were classical Democrats.

It is remarkable that Schlesinger never wrote a biography of Martin Van Buren or James Polk because he is clearly an admirer of both men. Schlesinger is best known for this book as well as his 1000 Days which is a laudatory history of the Kennedy administration.

Schlesinger is the most celebrated of the presidential historians and I don't think he really deserves that honor. His poll of historians that rank the presidents is considered the barometer of presidential performance. However, Schlesinger was a partisan defender of Democratic principles. I think there must be a clear delineation between scholar and partisan. Apparently, Schlesinger does not.

This book won the Pulitzer Prize for history in 1946.
Posted by Brian Schwartz at 9:17 PM