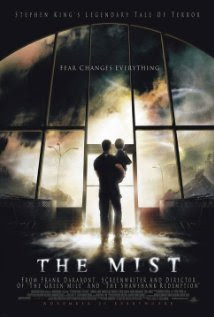 I’m surprised it took 22 years to turn this fine King novella into a movie. The story just screams out for a screen treatment In 2007, Frank Darabont, who successfully adapted King’s two prison stories, Rita Hayworth and the Shawshank Redemption and The Green Mile to the big screen took King’s science fiction/horror crossover and made it into a superb movie.

Darabont has done well with King’s work because he doesn’t try too hard to improve upon the story that King told in print. Both The Shawshank Redemption and The Green Mile are nearly straight retellings of King’s stories. He tinkers at the margins to successfully translate the story to the visual medium, but he knows good work when he reads it and isn’t so arrogant to believe that he can tell a better story than King. The only movie maker to dramatically alter a King work and improve it for the screen was Stanley Kubrick’s retelling of The Shining.

The story unfolds exactly as it did in the novella. The stark differences – and improvements – are in the casting. The obnoxious next door neighbor in the novella, Brent Norton, was obviously a middle-aged white guy. Darbont cast Andre Braugher who carried off the role well. Mrs. Carmody, the story’s antagonist, is an overweight antique dealer who dresses in garishly yellow polyester. On film, (and perhaps in the novella), this would be a caricature and a cliché. Darabont instead drafted the attractive Marcia Gay Holden to play the fanatical preacher of Old Testament doom.

Darabont also recruited a couple veterans of King films in Frances Sternhagen, probably best know as Cliff Clavin’s mother in Cheers, but known to King fans for her work in Misery, and Jeffery DeMunn from The Green Mile and Storm of the Century. As the story moves toward its climax, these two veteran actors deliver stunning performances.

There are a few minor deviations from the King story. The flying creatures that get into the store and fire that starts when the inhabitants try to fight them with fire provide a nice action sequence after building the tension. Mrs. Carmody actually gets her blood sacrifice in the movie when she and her followers sacrifice Pvt. Jessup by gut stabbing him and throwing him out to the monsters in the mist. Again, it was a nifty dramatic sequence that added to the tension of the film.

The novella ends ambiguously. I like where King left us in the novella, with David Drayton, his son, and Laurie Holden creeping along the misty landscape of post apocalyptic Maine. Darabont throws a major curve ball and delivers a satisfying – albeit tragic – end to the tale. I will not describe it for fear or ruining what I think is one of the better twist endings I’ve ever seen in a horror movie. I will say if you’ve read the novella, you won’t see the end coming because King doesn’t event hint at what Darabont does with the end of his tale.

The movie was well received by critics, horror fans, and general movie goers. The CGI material is minimal and enhances the movie rather than carrying it. Much of the horror is generated by good, old fashioned puppets and rubber monsters. Thank you very much Mr. Darabont for not turning this story of a cross section of ordinary Americans confined in horrific circumstances into a CGI extravaganza of eye candy.

Frank Darabont seems to have developed a taste for horror. His latest project is the AMC television series The Walking Dead which has riveted horror fans to the small screen. Darabont is the first person to accomplish this in decades. I’ve only seen the first two episodes (I just can’t set aside specific times to watch television. It’s not in my nature). But I have the just released first season in my Netflix queue and am eagerly anticipating its arrival.

If you’ve read the novella, seeing the movie is a must. Darabont is true to King’s story that ranks among his best short works. Unspoiled by pretentious retelling, foolish subplots, and garish special effects, Frank Darabont produced a fantastic, horrific movie that is well worth the time invested in watching.
Posted by Brian Schwartz at 10:13 PM