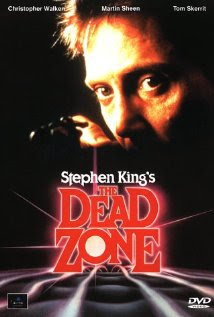 It was about 1983 that movies based on the works of Stephen King really became a hot commodity. The Dead Zone, Cujo, and Christine were all made into movies in 1983 with Children of the Corn and Firestarter following in 1984. During this time, screenwriters took liberties with King’s stories and usually made them work in the visual medium.

Jeffery Boam uses the ideas and concepts of King’s book. The movie captures the essence of King’s tale. However, he tells a different story. As I noted in my review of the book, this story was a tragedy. Boam tells King’s tale in a four act screenplay.

Sarah and Johnny – played exceptionally by Christopher Walken -- are planning to get married as the movie opens. They return home from the carnival where nothing happens. Sarah invites Johnny in to spend the night. The virtuous Johnny says he wants to put off sex until after marriage. They say goodnight and Johnny drives off into the night.

As he’s headed home in his yellow Volkswagen Beetle, a milk truck overturns in front of him and he collides with it. Sweet, wholesome milk does in sweet, wholesome Johnny Smith.

Johnny awakes in a private clinic run by his doctor, Sam Weizak. Almost five years have passed and he is stunned and heartbroken to hear that Sarah has moved on and gotten married.

Johnny’s first precognitive event is a great deal different in the movie and too melodramatic. Instead of just telling his therapist her house is on fire, as he does in the book, Johnny tells the therapist that her child’s bedroom is on fire with the child in it. The call for help is placed and Johnny saves the day!

His parents come to see him. We get hints of Johnny’s mother’s religious mania, but it is never developed. Sarah stops in also to tell Johnny of her life with her new husband and baby. She shares Johnny’s sorrow for their lost and doomed relationship.

Johnny returns home and tries to rebuild his life. His mom is now dead and he and his dad live alone in the country. One day, out of the blue as Johnny is splitting wood, Sarah shows up unexpectedly. They have lunch and when Sarah’s son falls asleep, they make love. They have dinner with Johnny’s dad, then Sarah leaves, making it clear that, after their love was consummated, she was moving on with the life she’d made for herself, without Johnny.

That is the chief emotional difference between the book and the movie. In the book, when Sarah and Johnny made love, Sarah made it clear it was a single act that was to suffice to make up for what was lost. It was ritualistic, and it was emotionally uplifting.

In the movie, the scene plays out as if Sarah is trying to absolve herself of something. She is quick to cut off Johnny’s pleas to see her again. She is done with him. She’s done her best to make it right. The scene in the movie is a downer.

Sheriff Bannerman of Castle Rock pays Johnny a visit. Driving him is the young deputy, Frank Dodd. Bannerman makes his plea for assistance and Johnny rejects his request and tells him to leave. But after hearing of another murder and pressure from his father, Johnny gives in and agrees to meet with Banner.

In the book, Johnny first handles the cigarette pack in the station where he can’t get anything. When he visits the crime scene is where he’s able to figure out Frank Dodd is the killer. In the movie, they are visiting the crime scene of the last murder when they are called to yet another murder that has just happened. Deputy Dodd drives them there and is then dispatched to handle crime control.

Johnny hovers over the spot in the town gazebo where the girl was killed and identifies Dodd as the killer. Dodd has taken the sheriff’s car and has headed for home. Bannerman and Johnny go to the house where they find Frank Dodd dead in the bathroom by his own hand.

The scene where Bannerman and Johnny close in on Dodd is the best part of the movie. Dodd’s mother is played exactly like Norman Bates’ mother and one can’t help but believe that King delved deeply into Robert Bloch’s Psycho inasmuch as he tapped Bram Stoker for ‘Salem’s Lot. The fifties, little boy cowboy motif of Frank Dodd’s bedroom and in the dilapidated house is a creepy setting suitable for a Stephen King movie. The brief interaction between Walken and Colleen Dewhurst who played Dodd’s mother is intense.

As in the book, Johnny gets a job tutoring the son of a rich industrialist. But this story line plays out entirely differently than it does in the book.

As Johnny enters the Stuart home, he is introduced to Greg Stillson who is running for the U.S. Senate. Roger Stuart promises to consider a large donation to the Stillson campaign, but later tells Johnny that the guy is a buffoon – but a buffoon who will probably get elected.

Johnny agrees to tutor Stuart’s son, Chris. Chris is shy and struggles with school work. Johnny tutors him in reading and also works to build the kid’s self esteem. Roger is pleased with the progress. To reward Chris, Roger decides to form a hockey team, purchase the equipment, and coach it.

When Roger arrives at the home with the hockey gear, Johnny touches it and gets a premonition of the boys falling through the ice and sinking to the bottom of the pond (instead of being trapped in a burning building). Johnny frantically begs Roger Stuart to cancel the hockey practice. Johnny’s behavior scares Chris who also begs his dad to call it off. Disgusted and angry, Roger agrees. But Johnny is told his services are no longer needed.

There is a knock at Johnny’s door and there to greet him is a Greg Stillson supporter going door to door for the campaign. As Johnny talks to him, his long lost Sarah walks up and introduces the campaign worker as her husband. The meeting is slightly awkward.

Greg decides to cross the street to the park and hear what Stillson has to say and see what makes him so charismatic and engaging. He greets Stillson as he approaches the stage. The two shake hands. Johnny gets hit with a terrifying image.

President Stillson is in his bunker. Before him is a general, reluctant to place his hand on a palm scanner and authorize a nuclear strike. Stillson is dressing him down for his cowardice when the Secretary of State bursts into the room, claiming that a diplomatic solution has been achieved. Stillson ignores them and launches the missiles, reveling in his triumph and his place in history.

When the two separate, both are stunned. Stillson staggers toward the stage, terrified by his new knowledge. A few days later, he asks Dr. Wiezak if he were given the opportunity, would he kill Hitler in his infancy. Without a moment of moral reflection Wiezak declares that he would.

This was where the movie is weakest. When asked in the book, Dr. Wiezak is concerned that Johnny has asked the question. He reflects before admitting that he would kill Hitler given the opportunity. In the movie, it appears almost as if Dr. Wiezak, whom Johnny has told of his Stillson vision, is compelling Johnny to act. Wiezak’s character is developed enough in the book and the movie for us to know he would not be so reckless in answering such a macabre hypothetical question asked of a man who is experiencing nervous and mental difficulties.

Greg decides to act. He acquires a sniper rifle and breaks into the town hall, hiding in the gallery. He is awakened by the entry of Stillson’s people when they enter to set up for the rally. He locks, loads, and waits. Stillson arrives and works his way to the stage.

Johnny jumps up and takes two shots, missing with both. As in the book, Stillson grabs a child and uses him for a shield. In the movie, it’s Sarah’s child who is at the rally with mom. Johnny recognizes her and her child just as a bullet from a Stillson body guard takes him in the chest. He falls from the balcony to the floor.

In the pandemonium, Stillson approaches the dying Johnny and asks, “Who are you?” Johnny grabs his hand. He sees Stillson, looking at the cover of Newsweek bearing the photo of him using the child as a shield. He takes a swig of whiskey and blows his brains out with a revolver. Johnny is satisfied he’s saved humanity.

Sarah comes over to him and weeps over his stricken body. As he dies, she tells him, “I love you.”

Although much different in the telling than the book, I thought Boam’s script was a tremendous rewrite of a book that would have been incredibly dull by direct transfer to screen.

This was before Christopher Walken had developed a reputation for playing crazy people, so his portrayal of vanilla Johnny Smith is believable and at times, superb.