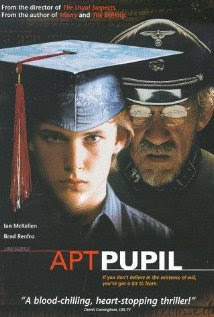 In 1998, Stephen King’s novella from the book, Different Seasons was made into a movie starring Ian McKellan as Arthur Denker/Kurt Dussander and Brad Refro as Todd Bowden.

It was the third and final story from Different Seasons to make its way to the big screen and the least successful of the three.

According to an IMDB contributor, King was so eager to have Bryan Singer direct the picture that he relinquished the rights to the story for just $1.00.

The movie very closely follows King’s story. Like the novella, the movie is exceedingly dark. There are no throw away laugh lines. There are no light moments. From beginning to end, Singer’s film is as dark as King’s darkest works.

There are minor deviations from the story. In the novella, Denker hatches the plan to deceive Todd’s guidance counselor by having Denker pose as Todd’s grandfather. This was an important turning point in the story because this is where Denker explains to Todd that no longer does Todd control Denker’s fate; their fates are entertwined.

In the movie, for no obvious reason, Denker just shows up posing as Todd’s grandfather. Todd is briefly taken aback to find Denker sitting before his guidance counselor before playing along with the ruse.

Usually, Hollywood is wont to add to the body count of story to bring more action to the screen. Boyce’s script actually reduces it. The novella’s narrative takes us through at least two of Denker’s murders and two of Todd’s. While the murdering habits of both are referenced in the movie, the only murder we see outright is the fateful murder that leads to Denker’s heart attack.

Boyce took it upon himself to rewrite the climax of the movie. The reasons for the first part of the rewrite are obvious: to create a palpable tension on screen. In the novella, guidance counselor, Mr. French (played by Friends veteran, David Schwimmer), learns of his deception via a phone call to the boy’s grandfather. If they novella had a weakness, it was the motivation for making this phone call. French made the call because he had nothing better to do with his time that day.

In the movie, he encounters Todd and his parents at his graduation and makes mention of the “rough patch” Todd had gone through years earlier. The parents are obviously confused and Mr. French suspects he’s been had. However, the bell summoning everyone to take their places distracts him from exploring the situation further. The tension here is much more palpable than it was in the novella.

He shows up at Bowden’s door and Todd greets him, just as in the novella. Instead of spraying French’s brains all over the door of his Saab, Todd warns him off, saying, “You have no idea what I’m capable of.” The warning is obviously ominous enough to drive French off. He leaves and that is how Todd’s part of the story ends in the movie.

Denker takes a much different exit than he did in the novella. In King’s story, he overdoses on narcotics he stole from the hospital pharmacy. The ease with which Denker acquired his narcotics in the novella did stretch credibility just a bit because even in the 1970s when King wrote this novella, hospitals very closely guarded their narcotic supplies.

In the movie, Denker commits suicide in a more dramatic and plausible manner. As the authorities are preparing to arrest him and transport him to Israel, he removes his IV tube from the pump and blows into it, causing a massive embolism. Denker’s ashen corpse lying on the hospital bed, with medical personnel working in vain to save him looked like a man who had departed the earth for Hell itself.

McKellan is perfect as Arthur Denker/Kurt Dussander. His countenance makes him look like the physically frail man he was in the story. Yet McKellan brings out the menacing, evil, and dangerous nature of the man within the frail body.

Renfro’s work is average. This is partially Renfro’s fault as he did not seem engaged in the part. The screenwriter also shares in the blame because Todd is not fully or properly developed.

Apt Pupil lost money and was considered a flop. I believe this was mostly due to its dark and ponderous nature. All gore and violence was stripped from the story. As with King’s novella, there was no happy ending, no redemption, and no sympathetic characters. The movie and the story are also haunting for they lie not outside the realm of real life plausibility.

There is one fundamental shift from King’s story and that is Todd’s nature. It is impossible to determine if the shift was deliberate.

Denker, by the fact that he was a member of the SS and had committed atrocities at the concentration camps, was easily established as an evil character. King establishes Todd as a sociopath with his lust for murder on a grander and grander scale. The movie develops Todd very little. There’s nothing to indicate that Boyce was trying to find some redemption in Todd, but Boyce never established Todd’s menacing nature. The fact that Todd almost seemed to be trying to do Mr. French (a Jew) a favor by warning him off, belies what we know about Todd from reading the novella.

Nonetheless, for those of us who enjoy emotionally dark stories, the movie was satisfying, if not nearly as good as King’s novella. A little more effort in developing Todd’s evil nature would have made the movie much better.
Posted by Brian Schwartz at 3:29 PM