Book to Movie: The Shawshank Redemption (1994) 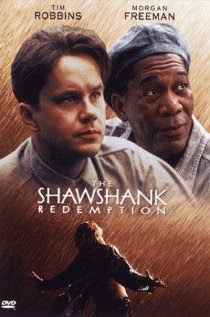 In 1994, Frank Darabont, a writer of some low budget, low quality horror such as Nightmare on Elm Street 3, took on the project of adapting Stephen King’s novella of hope, Rita Hayworth and the Shawshank Redemption, to the big screen. He captures the essence of the King story and is true to King’s theme of hope not lost through decades of struggle. But his motion picture is substantially different than King’s novella.

The opening of Darabont’s movie sees Andy on trial and convicted for murdering his wife and her lover at a remote cottage. As the prosecutor delivers his summation, we’re treated to cutaway scenes of a drunk Andy sitting in his car, pondering his gun. Darbont never conclusively states that Andy is innocent, but one comes away from the scene believing he’s been unjustly convicted.

Andy and the new “fresh fish” arrive at the prison to the taunts of other prisoners who scream and yell at them as they are paraded through the yard to be processed and imprisoned. Inmates, including our narrator, Red, take bets on which of the new cons will break down first.

We’re introduced to two characters who are important to King’s story, but are not developed as Andy and the other cons are introduced to prison. In the novella, Andy’s stay at Shawshank is overseen by a few wardens. In the movie, the warden who comes out to greet the prisoners is Andy’s overseer for the decades he spends at Shawshank.

The other new character who is much more a part of the movie is the captain of the guard, Captain Hadley, played by the large, baritone-voiced Clancy Brown (a native of little Urbana, OH). An inmate who dares ask when they are going to eat is beaten badly by Hadley at the warden’s command. The villains of the picture are established.

In the night, one of the new fish breaks down and begins sobbing for his mother. The inmates cheer until Hadly shows up to silence the frightened man. He drags him into the middle of the cell block and beats him badly. The inmates are silenced by the raw brutality of the beating. They learn the next day the man died in the infirmary.

From here, the movie moves much as King’s plot with the strong friendship between Red and Andy developing and Andy’s desire first for a rock hammer and then for the poster of Rita Hayworth.

For the picture to work, it’s obvious that Darbont was going to need to develop just a few more characters beyond Red and Andy. He incorporates a number of prisoners who bear scant mention in King’s text and adds a pitiful old prisoner who serves as the librarian. When Andy makes his move to help Hadley protect is finances, Andy is assigned to help Brooks Hatlen run the library. It is from the library that Andy runs his finance program. He’s also invited by the warden to help with the finances of his new inmate work program; to launder the proceeds and make the warden rich.

Later, poor old Hatlen (played by James Whitmore) is paroled into a world he doesn’t know or understand and ends up committing suicide.

What is remarkable about Darabont’s Shawshank Prison is that it is populated almost entirely by white people. With the exception of Red (played by Morgan Freeman), the inmate population is exclusively white. Whoever cast extras for this movie (and most of the extras came from the Mansfied, OH area where the movie was shot) really botched the job or Darabont is not up on historical or modern criminal sociology.

What is also not believable about Darabont’s picture is the nature of the criminals who are housed at Shawshank. The notorious Sisters of King’s novella are there, and they are ugly, but most of Darabont’s criminals are noble men. Deep friendships and mutual support exists among the core group of inmates. Again, it belies what is commonly known about prison, even in the 1940s. Most men incarcerated in prison are bad dudes and many of them are sociopaths. We don’t see this side of prison life in Shawshank Redemption.

There is a minor deviation from the story regarding the fate of the young, cocky kid who comes to Shawshank and tells Andy that another man has confessed to his wife’s murder. In the novella, when Andy pleads with the warden to be allowed to retain a lawyer, the warden has the young inmate transferred out. In the movie, the warden schemes to have him shot. I like this change. It demonstrates how cold and ruthless the warden and Captain Hadley are.

Andy’s escape from Shawshank and the search that results play out as King wrote them, but the set up is different. In the movie, Andy steals a suit and shoes from the warden and smuggles them back to his cell and secrets them out of the prison. We see a neat and tidy Andy, with spit shined shoes walk into a local bank and remove money from a savings account. Red tells us that there were many of these accounts in many banks in the area.

In King’s story, Andy had a friend set all of this up for him. In the movie, we learned that Andy, in the course of handling the warden’s ill gotten gains, sets up accounts under fictitious names. As Andy jokingly tells Red, he was an upstanding citizen on the outside. He had to come to prison to become a criminal.

Darabont, having established how ruthless, evil, and corrupt the prison administration was, injects a bit of revenge into the climax as well. We see an envelope arrive on the desk of a newspaper reporter. Red tells us that the contents documented the ongoing corruption and brutality at the prison. We see the Attorney General and state troopers rush into the prison and arrest Hadley. The warden puts a pistol to his head as the troopers break down the door. On the wall hangs an embroidered scripture that reads, “His judgment cometh and soon.”

Red gets his parole and just as in the story, goes searching for that volcanic rock secreted under a tree in a Maine field. He finds it and heads south. The novella ends with Red waiting to cross the border. The movie ends with Red locating Andy on the shores of the Pacific Ocean in Mexico.

The movie is the highest regarded of all of the movies based on Stephen King’s work and ranks as the number one movie of all time on IMDB.com’s list of the top 250 movies of all time. It is a delightful movie bordering on great. But it is not deserving of such lofty praise.

King’s story inspires hope and contains a positive message. Darabont’s film goes one step further into sappiness. The story is a first person narrative told by a man with a simple way of telling a story. The narrative written for Morgan Freeman flows as if written by a poet. The strong bond between the cons belies the reality of prison life.

Perhaps the most telling scene of how Darabont goes just a little too far in his quest for uplifting melodrama is when Andy receives a shipment of records for his library. He puts an Italian aria on the turntable and turns on the prison intercom so everybody can hear the shrill voices of the opera singers. Everyone stops what they’re doing and looks into the air, transfixed by the music as if they were all enraptured by opera. The scene is foolish and stupid and made me laugh when I saw it.

But just as that scene was stupid, the scene of Andy, having crawled through half a mile of raw sewage, standing in an open field, arms to the sky, taking in the rain as it showers him clean, is powerful and iconic. Bravo, Mr. Darabont for giving the film such a powerful, iconic image.

The movie undoubtedly has shortcomings, but it is still a great movie. Tim Robbins turns in the best performance of his career as Andy and Morgan Freeman peformance soars, both as an actor portraying Red and as the narrator of the movie. And despite the necessary new characters and plot deviations, Darabont captures King’s theme of “Hope springs eternal,” that he established so masterfully in his short tale.

This would not be Darabont’s last King adaptation. He would take on King’s second prison story, The Green Mile with what I regard as much more success. He would go on to masterfully recreate the King novella, The Mist. When one examines the totality of King’s work translated to the visual media, one can only conclude that, in totality, no one did it better than Darabont.

The movie was a tremendous box office success and garnered 12 Oscar nominations and seven Oscars. Mainstream audiences flocked to see the film, not knowing that it was based on a work written by the man snobbish literary critics dismiss as America's Schlockmeister. With the movie, Stand By Me, which also came from Different Seasons, King proves that his work can entertain, move, and inspire audiences of all types.
The movie was filmed at the Mansfield Reformatory in Mansfield, OH. The outside scenes were filmed in the city and a rural area near Malabar Farms State Park near Mansfield.

On August 1, 2011, high winds from a thunderstorm knocked down that famous tree where Red found the keys to his salvation. The oak tree, estimated to be 175 years old, hat rotted from within and half of it fell to the ground. Although half of it is still standing, its survival is very much in doubt. The story of the tree's demise received nationwide coverage.
Posted by Brian Schwartz at 5:51 PM