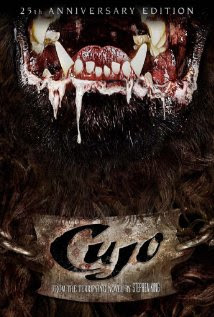 Book to Movie: Cujo (1983)
Screenplay by Don Carlos Dunaway and Lauren Currier
Based on a novel by Stephen King
Directed by Lewis Teague

Stephen King’s Cujo had been on the shelf just a few months when the book was adapted for a short story. Most movies based on King’s books had done well on the big screen and nobody had yet made a truly bad movie based on a King work. It was a natural progression in the early and mid eighties for King novels to go right to the big screen.

Cujo the movie is essentially the same story as Cujo the novel. The screenwriters tinker at the margins of the story to make it better for the visual medium.

In the movie, we are immediately immersed in Donna Trenton’s (scream queen Dee Wallace) affair with Steve Kemp (played by Wallace’s real life husband, Christopher Stone). In the movie’s opening minutes, we see Donna stand up from Kemp’s bed and dress herself. Her visage is grim because of the guilt of the affair. It is here, in Kemp’s studio apartment Donna ends the affair in the movie version.

Kemp and Vic know each other because Vic delivers refinished furniture to the Trenton home. Early on, Vic has no idea there is an affair going on. Later, he spots Donna and Steve arguing outside of his apartment and gets the clue. His suspicions are confirmed when he comes home and finds Kemp in his kitchen, his wife crying, and broken eggs and glass on the floor.

Later, Vic drives off in his vintage Jaguar, leaving his wife in silence, heartbroken. He is off to try to save his business. She is left alone to wallow in guilt and remorse.

Just as in the book, the on evening excursion into town, the Pinto starts up again with its antics. Donna gets the car home and resolves to take it to Camber’s the next day.

Meanwhile, Gary and Joe Camber are getting theirs courtesy of Cujo – no longer the good dog.

The Pinto dies in the driveway. What transpires over the next 30 minutes is some of the most tense – and at times, tedious – movie making ever. Cujo is there to greet Donna and Tad. He is transformed from the fluffy, loveable St. Bernard to an evil looking beast with blood matted fur and a foam slathered face. Cujo tries to attack Donna as she approaches the garage looking for Camber.

Donna and Tad are trapped in the car and Cujo stands guard, waiting for his prey to die a slow death in the Detroit manufactured oven in which they are basting, or a much quicker, but painful death with their entrails dangling from his rabid jaws.

The makeup and effects people were in rare form when they shot the car scene because, even on the coldest winter night, one could not help but feel that stifling, muggy heat of a closed car on a summer day. For me, the viewing was more painful than pleasurable.

Eventually Vic is alarmed when his wife does not answer repeated phone calls. In the novel, his partner, Roger, is sympathetic and worried. In the movie, he’s narcissistic, pleading with Vic to stay and work on the campaign. Vic calls the authorities and heads for home.

Meanwhile, Donna resolves to try for the house. She can’t see Cujo. She doesn’t know where he is, but goes for it anyway. Cujo, lurking out of sight under the front bumper, pounces and bites deeply into her thigh. She barely makes it back to the car. She now is infected with rabies.

She and Tad swelter on. Tad now lives in a heat induced delirium.

Sheriff Bannerman is dispatched to the Camber home and Cujo greets him. They struggle and Bannerman drops his gun. While they struggle, Donna goes for the baseball bat lying off to the side of the car. Cujo and Donna Trenton square off. Tad Trenton’s life hangs in the balance.

Cujo attacks and Donna belts him across the head. He retreats and attacks again and Donna shatters his ribs and breaks the bat. Cujo is battered but not broken. He makes one final lunge. Donna thrusts the splintered handle of the bat upward, impaling Cujo on the wood. His teeth snap at her, just inches from her face. Then he fades. . .

She grabs Bannerman’s gun and breaks out the window of the house to let herself inside. She carries Tad in and starts showering him with cool water and trying to breathe life into him. Just as Tad responds, Cujo lunges through the window, making one last stab from Hell’s hot. Donna dispatches him with a bullet.

Just as this transpires, Vic shows up for a happy family reunion. There the movie ends.

I did care for this movie any more than I liked the book, but for different reasons. None of them have anything to do with the quality of the film. Dunaway and Currier did an excellent job of adapting King’s book to the screen and making the story work. Teague certainly created tension in his movie and the entire cast was solid.

I didn’t like the movie because it made me uncomfortable. I don’t mean it made me squeamish violated my core values. It made me physically uncomfortable. I felt as if I were dying of heat prostration just watching the last 30 minutes. The film left me feeling physically and emotionally exhausted. Perhaps that is a compliment to how well Teague directed the film. But I have no need to see this movie again.

The movie was well received upon its release in 1983, but it only rates 5.8 stars on IMDB. Perhaps it was more enjoyable viewing in the theater. Perhaps the casual viewer who didn't make a conscious effort to go to the theater and see it liked it less. For whatever reason, the movie's reputation has waned over time.

The obvious difference between book and movie is that Tad lives instead of dies. King fans may complain. Stephen King may complain (he did). But it had to be that way. Book readers are a different lot than movie goers. I didn’t care for Tad’s death in the book, but it works in literature. Unhappy endings work more often in books than in movies. Had Tad died, all those who went to see the movie and endured all that tension would have received no reward; no happy ending. After taking viewers through 30 minutes of mental anguish, there was no way Teague could have killed off Tad without movie goers being angry.

It was this movie rather than the book that injected the name, "Cujo" into our cultural lexicon. The name Cujo instantly stirs images of vicious dogs in the minds of people who’ve never read a King book and shun horror movies. Such was the impact of this movie.

There are those who enjoy movies where the tension is steady and long. I’m not one of them. I hesitate recommending this movie for that reason. If you are someone that does enjoy that kind of movie. Teague delivers a first rate motion picture.
Posted by Brian Schwartz at 4:38 PM