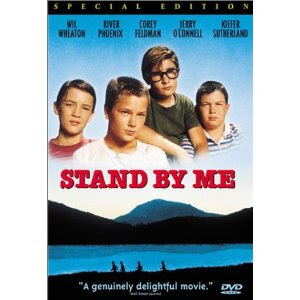 Book to Movie: Stand By Me (1986)
Screenplay by Raynold Gideon and Bruce A. Evans
Directed by Rob Reiner
Based on the Stephen King novella, The Body

Stephen King’s novella, The Body, from Different Seasons, was made into a movie entitled Stand By Me in 1986. It starred River Phoenix, Wil Wheaton, Corey Feldman, and Jerry O’Connell. The movie was an instant hit, established Rob Reiner as a serious director and producer, and introduced Stephen King to mainstream movie audiences.

While the story closely follows the novella in its actions, its primary focus is changed. The novella, told as a first person narrative by character Gordie LaChance (played as a child by Wheaton and as an adult by Richard Dreyfuss), is a character study of four 12 year old boys and an examination of how the transformation from childhood to adolescence brings about changes that erode old friendships.

The movie is a character study of LaChance alone. Although the four boys all retain their formative roles in the story, the character of Gordie LaChance is fundamentally altered to make the story revolve around him.

We know from the very beginning where the story is going to end. At the end of the novella, Gordie relates to us the sad ending to the difficult life of his buddy, Chris Chambers (played by Phoenix). In the opening scene of the movie, we see the middle aged Gordon LaChance sitting along the country road where they found the dead boy years before, holding a newspaper. The headline of one of the stories visible in the paper tells of the murder of local attorney Chris Chambers. From there, Dreyfuss leads us into the narrative.

In King’s novella, Gordie’s older brother, who died in a military Jeep accident, is a remote figure in Gordie’s life. So much older than he, his brother and him had little in common. In the movie, through flashback scenes, we are shown that Denny LaChance is young Gordie’s hero. While his parents heap praise on Denny at the dinner table for his sports exploits and his attractive girlfriend, Denny tries to divert their attention to a new story Gordie has written. Gordie’s parents are dismissive, but Denny knows his brother is talented.

In another scene that is not in the novella, before he ships out, Denny gives Gordie his Yankee’s ball cap. We find that Gordie treasures that cap when, as he is walking through town, he and Chris Chambers are accosted by bullies Ace Merrill and Eyeball Chambers. The bullies steal the cap and Gordie is willing to fight hard against the town’s nastiest bully to get that cap back.

The changes strengthen LaChance’s character and sets up the movie nicely to center around the changes he experiences in the coming of age story.

Almost without deviation, the story of the trip down the train tracks proceeds. The other significant deviation from the King story comes at climatic confrontation between the four boys and the bullies over the dead body of Ray Brower. Instead of Chris Chambers producing the gun and firing at the feet of Ace Merrill, it is Gordie. The sullen Gordie is suddenly hard and animated, standing off Ace and his buddies and scoring a moral victory for himself and his friends.

Reiner ends his film nicely. Richard Dreyfuss tells us of how the four friends drifted apart over the next year, just as Chris Chambers had predicted they would and how Chris has opted for the college track, fought hard, and made it through high school, college, and law school. In the novella, Chambers was still a college student when he died and we had no foreknowledge of Chambers’ fate. But, Dreyfuss relates the sad tale of how lawyer Chris Chamber met his sad end.

The movie wraps up as author Gordon LaChance sits at his monochrome word processor typing the final words of his story. He states that the best friends he ever had were the friends he had when he was 12. He then shuts down the word processor and heads off with his wife and kids.

The Body and the book Different Seasons were Stephen King’s first published efforts at mainstream fiction and Stand By Me was the first movie based upon a King work that was made for the mainstream. Audiences who shunned King’s work and movies based upon it were amazed to learn who had penned such a marvelous character study.

Three of the four boys who starred in the movie went on to great fame. Jerry O’Connell never achieved the fame that Phoenix, Feldman, and Wheaton did, but is still a working actor and recognized talent in Hollywood.

Rob Reiner has, of course, gone on to achieve great things, make great movies, win many awards, and establish himself as a great director and producer. He had directed and produced several films before Stand By Me, but none as important.

Stand By Me is one of those rare movies that I enjoyed as much as the story upon which it was based. This is remarkable considering the fundamental change in the nature of the story that I enjoyed so much. Reiner’s interpretation of King’s work was not necessarily an improvement to the King story, but it made for a much more engaging and emotionally uplifting movie. That is why it is still recognized as one of the finer films ever made and ranks near the top of all King’s screen adaptations.
Posted by Brian Schwartz at 7:45 PM